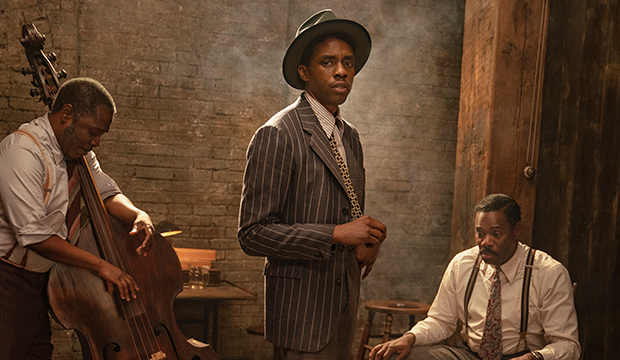 Welcome to Oscar Experts Typing, a weekly column in which Gold Derby editors and Experts Joyce Eng and Christopher Rosen discuss the Oscar race the same way you’ve been communicating with your coworkers for the past year: via Slack. This week, before the Golden Globes hand out their trophies, we chat about the Best Actor race that appears to be a done deal.

Christopher Rosen: Joyce, we’re back to our typing, and this week — on the eve of Golden Globes weekend — I want to discuss the Best Actor race. Which maybe needs very little discussion: the late Chadwick Boseman is an overwhelming favorite to win the first posthumous acting Oscar since Heath Ledger in 2009. His performance in Netflix’s “Ma Rainey’s Black Bottom” has felt undeniable from even before people actually saw the movie; there was a feeling, sight unseen, the film would be his coronation since Boseman’s death in August. That his performance in “Ma Rainey” is so good — electric, anguished and absolutely a career-best moment for the beloved actor — only further buttresses his Best Actor bona fides. I have him winning, and you do as well — and unless something truly shocking happens on Sunday, the Golden Globe Awards will start Boseman’s expected dominance through awards season. But what fun is an awards race without some speculating and contrary thinking? So I ask: Is Boseman this year’s Joaquin Phoenix, or will someone like Anthony Hopkins or Riz Ahmed — both of whom delivered stellar performances as well — step up and disrupt the accepted front-runner narrative?

joyceeng: Not to make a music pun right off the bat, but if anyone has followed my nonsense this season then you know I sound like a broken record saying that I would love for Ahmed to win. But it looks like this will be a “welcome to the club” nomination for him. It’s crazy to think that literally a year ago, everyone was like, “Hopkins is a lock” after “The Father” opened at Sundance. He is incredible in the film — which is finally opening in very limited release today — but things have, obviously, changed. As you said, Boseman has the performance and I think the sentiment will be with him too. The thing is, we don’t have a lot of data to go on when it comes to posthumous acting nominees — there have been more at the Emmys, which is not really a sentimental bunch when it comes to crowning posthumous winners (#neverforget when people thought Carrie Fisher would win for “Catastrophe” after her untimely death). But also, different academy, different membership. I know some people are hoping for a little excitement, for lack of a better word, and are predicting a Hopkins upset at the Globes and the BAFTAs, which I am not ruling out 100 percent, but even with those potential losses, a win at SAG for Boseman — where I’ve always said he is more of a lock — would be enough for Oscar gold. Do you smell an upset anywhere?

Christopher Rosen: At the risk of avoiding conflict, I don’t: Boseman feels like the lockiest of locks to win at the Globes and while a loss at the BAFTA Awards is certainly plausible, I just think he’s going to cruise through to April 25. But let’s talk about the rest of the category before jetting off to prepare for the pandemic Golden Globes: Boseman, Hopkins, and Ahmed are basically set in stone as nominees. Steven Yeun for “Minari” and Gary Oldman for “Mank” are the expected fourth and fifth competitors for Oscar, besting folks like Delroy Lindo for “Da 5 Bloods” and Tom Hanks for “News of the World.” But in the interest of embracing my inner Bernie meme, I am once again asking for Ben Affleck to get the plaudits he so richly deserves for “The Way Back.” That sports weepy came out way back in March of last year, lost in the frightening early headlines of the coronavirus pandemic. But it has often, at least recently, been hailed as Affleck’s best acting performance ever — and while I disagree (“Gone Girl” for the win), he really does some special work in Gavin O’Connor‘s film. Affleck has dutifully participated on the awards campaign trail — a Variety interview with David Fincher here, an actors roundtable with The Hollywood Reporter there — and I have to wonder: Is it possible he sneaks in as the No. 5 Best Actor nominee, besting Oldman for the position? Have I gone (baby gone) around the bend, Joyce?

joyceeng: As a fellow Ben Affleck stan, I am not going to argo argue with you about the merits of his performance in “The Way Back.” It’s top-tier stuff and reminded me of his brother’s bone-deep aching, Oscar-winning turn in “Manchester by the Sea” (my favorite Best Actor performance of the last decade). But I’m also a realist and as much as I admire his valiant campaign (the cross-promotion with Fincher is genius), I’m gonna say our boy will have to wait for his first acting nomination a little bit longer. The field is too competitive and I think he really needed that SAG nomination, which you were predicting, to make a stand. Ben, if you’re reading this, go make a sequel to “The Town” (suggestion: “Back in Town”) and come back to us. I do want to go back to Lindo, though. Like Hopkins, he was another presumed early frontrunner — for a nomination at least — since “Da 5 Bloods” opened in June, but he’s missed every big precursor, save for a Critics Choice bid in a field of eight (that includes Ben) and the film is kind of fritzing overall. Can he “surprise” on nomination morning?

Christopher Rosen: It would be nice but I don’t think so. If you’ll allow me to put on my Charlie Day peg board cosplay for a second: Lindo plays a character Spike Lee described as a “MAGA-hat-wearing motherf–ker.” After such a contentious election and violent transition period, is that the type of character Oscar voters want to highlight — even if Lindo upends and subverts the MAGA hat ideology?

joyceeng: Probably not. But then again, some surmised last year that Charlize Theron could be snubbed because she was playing Megyn Kelly. Unlike Lindo, though, she also had the “physical transformation” card to play. It would be cool if Lindo made it in along with the top three and Yeun — no offense to Oldman — because it’d be the most diverse Best Actor lineup in history. It’s also nice to see Yeun break into the top five after “Minari’s” SAG windfall since this category is long overdue for its first Asian-American nominee.