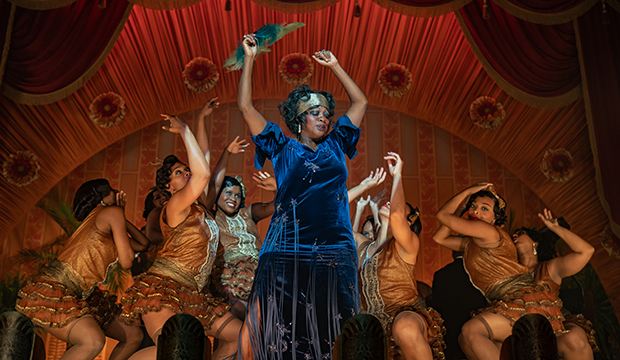 Welcome to Oscar Experts Typing, a weekly column in which Gold Derby editors and Experts Joyce Eng and Christopher Rosen discuss the Oscar race the same way you’ve been communicating with your coworkers for the past year: via Slack. This week, on the eve of the BAFTA Awards, we once again look at — you guessed it — Best Actress.

Christopher Rosen: Hello, Joyce! We’re less than a week away from the start of Oscars voting, meaning we’re in the home stretch before the home stretch — which feels like the perfect time to again discuss the chaotic and unsettled Best Actress race. As we discussed this week, it’s the one major race that has no frontrunners. I could sit here and type enough rationalizations and reasons for every single nominee in the category to win on Oscar night — including Vanessa Kirby (she’s been nominated everywhere!) — but I’ve decided to push all my chips into the center of the table for Viola Davis. That’s partially because of her win at Sunday’s barely watched Screen Actors Guild Awards, an honor she absolutely needed to separate herself from this talented group. But I think there’s more at play here than simply precursors. Shortly after her SAG victory, Davis appeared on the cover of Entertainment Weekly, won the Icon Award at the African-American Film Critics Association, and just generally seems to have picked the right time to surge to the front of mind for academy members. The only other contender with such a profile boost is Carey Mulligan, who is hosting “Saturday Night Live” this weekend. It’s purely anecdotal and maybe foolhardy but it just feels like a perfect storm: After a season of worthy competition, I think we’re going to look back after Davis wins her first Best Actress Oscar and becomes only the second Black actress to earn the top actress prize in Academy Awards history and just marvel at its obviousness in hindsight. But maybe I’m wrong? Will I be saying the same thing about Andra Day?

joyceeng: Very excited to solely be discussing Best Actress for the next fortnight. It would be very funny if Davis indeed wins. She was always in play from the start, with the “second Black Best Actress winner” narrative and whatnot, had a solid stretch late last year in the top spot in the odds, but she fell back as “Promising Young Woman” kept over-performing and Day grabbed the Golden Globe. But what if we were all overthinking it and it has been Agatha Viola all along? The SAG win certainly supports it. Her campaign has also been very shrewd. She was pretty low-key during Phase 1, which I think also contributed to people losing faith in her, but she’s cranked it up in Phase 2. She’s on magazine covers, doing interviews (including with Oprah), and Netflix announced a special celebrating Ma Rainey (the person) in partnership with the Grammy Museum. Pro-level stuff here. Day is such a wild card. Obviously she’d also fit the “second Black winner” narrative, but she’s been AWOL since Critics Choice. However, she’s also shrewdly presenting at the BAFTAs this weekend, taking a page out of fellow SAG and BAFTA snubbee Regina King’s playbook from two years ago. And this sounds backwards, but even though she missed at the two industry awards, Day, unlike everyone else in this category, has only lost to one person (Mulligan), not multiple people. Mulligan’s taken a lot of hits for a presumed favorite, but I think she still has a path — a narrow one, but it’s there — since this category is serving major “Choose Your Own Adventure” energy. Or do you think she’s out of it?

SEE Oscar Experts Typing: It (probably) won’t happen, but who’s the most likely to pull off a Best Actor upset?

Christopher Rosen: I refuse to believe anyone is out of this race and so I won’t be eulogizing Carey’s campaign just yet. But I’m also not picking her to win. It just feels like were she going to wind up taking Best Actress this year, she would have won something significant to this point. (No, I’m not counting the Critics Choice Awards as enough of a signifier this year.) Back in December, when the heat around her performance was burning at its highest temperatures, I think it was easy to imagine her following a path laid by Joaquin Phoenix last year, with a complicated character who seeks vengeance. But there are big differences between those performances, starting with the fact that Mulligan is much more grounded than Phoenix and brings her character to life without as many affectations. I wonder if Mulligan didn’t “transform” enough for academy voters — which is also why I’ve got Davis ahead of Day. For “Ma Rainey,” Davis not only changed her physical appearance but also had to sing — something Day is already known for doing so well. I don’t know, maybe if Mulligan actually fully sang “Stars Are Blind,” she’d have a leg up here in this category?

joyceeng: Or, you know, “Toxic.” I mentioned earlier this week that it feels like everyone’s early suspicions that Cassie is not the type of role and character the academy likes to reward is starting to bear out (“Gone Girl” teas). But, yes, I agree that Mulligan’s type of performance is likely a factor as well. I loved what she did, but it’s not a very showy turn compared to the scenery-chewing (not in a bad way) from Day and Davis. It’s no secret the latter is the brand of performance toward which they gravitate. And as much as “Promising Young Woman” has been presented as a revenge tale, it’s also a study of grief. Mulligan never unloads Cassie’s grief in an obvious way — tears, histrionics — but you can always see the heaviness in her face and eyes. I’m not saying voters need everything spelled out for them (or maybe I am), but it’s also possible that even though they love her performance, they don’t see it as a winning one. Who knows — maybe if Mulligan had turned it up to an 11 she’d be sweeping right now. She also encountered some bad luck with those 7-to-12 people assigned to the BAFTA Best Actress jury, given how her film performed in the non-juried categories. As for BAFTA, is there any result this weekend that would make you switch from Davis or reconsider someone else?

Christopher Rosen: This is where I should say that if Frances McDormand wins at BAFTA she’s got a path to Oscar victory — but I just don’t see it happening. It feels like her reward for “Nomadland” is the Best Picture win and that voters are happy to simply honor that film rather than her performance. I also wonder if when faced with the choice between giving Davis her second Oscar and first Best Actress trophy and McDormand her third Best Actress win, are voters going to just hold off? There’s really no “rush” to give McDormand another statue and she doesn’t even seem to really want it anyway (we stan an anti-campaign campaign). Meanwhile, Davis is just at the right moment in her career to ascend into the history of Best Actress winners. All that said, watch Vanessa Kirby win at BAFTA and really juice this race.

joyceeng: Seriously, though, after years of conformity, Kirby winning the BAFTA and Oscar a la Tilda Swinton or just the Oscar a la Marcia Gay Harden is exactly what we deserve in an acting category. More of this, please, always.