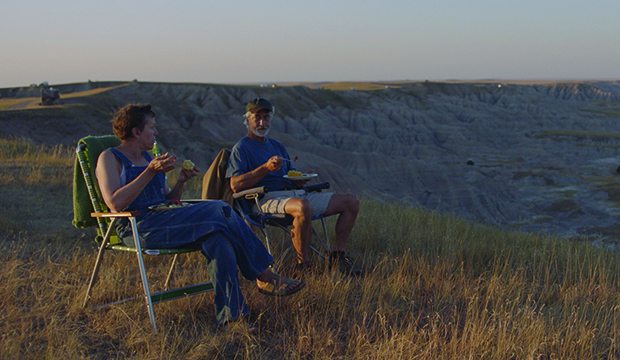 Welcome to Oscar Experts Typing, a weekly column in which Gold Derby editors and Experts Joyce Eng and Christopher Rosen discuss the Oscar race the same way you’ve been communicating with your coworkers for the past year: via Slack. This week, with Oscar nominations finally announced, we reexamine the Best Picture race.

Christopher Rosen: Joyce, we reached a milestone this week with the Oscar nominations but that doesn’t mean awards season is over. Far from it: the Academy Awards don’t take place until April 25 — this week, in addition to the nominations, we also got word that the academy plans to host an in-person event where Zoom calls will be forbidden — and the many guilds will unveil winners between now and then. The result should further solidify an Oscars race that kind of seems pretty solidified. As we discussed together just after the nominations, “Nomadland” remains the frontrunner and its six mentions on Monday kept it squarely in the driver’s seat. The Chloé Zhao film neither over-performed nor stumbled, and — thus far — nine of 13 Experts at Gold Derby, including the both of us, have it winning Best Picture. (An aside: Experts, if you’re reading this, make your predictions!) That feels right but in the interest of mucking things up and double-talking myself into another outcome: What if it’s not? What if “Minari” wins Best Ensemble at the Screen Actors Guild Awards and “The Trial of the Chicago 7” takes the Producers Guild? Are we too easily rubber-stamping “Nomadland” as Best Picture and, in a category that usually leans toward passion and not polarization, is “Minari” the eventual champ?

joyceeng: Wow, are we really in Phase 2? “Minari” winning would be awesome, but I am not ready to go out on that limb. I do have it in second and I think it’s one of those movies that can get a lot of No. 2s and 3s on ballots. But if we’re to go by stats, it’s hurt in that it floundered at the Globes and BAFTA, and it’s not a runaway favorite to win any other category at the Oscars. It’s third at worst in Best Original Screenplay and Yuh-Jung Youn is in first in Best Supporting Actress right now, but everyone and their mother knows that category is chaotic as all out. I have “Minari” winning SAG ensemble, but that probably won’t be enough without another major guild, like PGA (DGA is Zhao’s, duh). Plus, “Nomadland” is not polarizing in the way that “Promising Young Woman” would probably be. I can see “Nomadland” being like a “Shape of Water”: a steady but not super strong or “obvious” frontrunner that we all question throughout the season because we have to, but it pulls it out in the end. Does that make “Promising Young Woman” the “Three Billboards Outside Ebbing, Missouri” in this scenario? It’s also the only other Best Picture nominee to hit directing, acting, writing and editing.

SEE How to watch the 2021 Oscar nominees

Christopher Rosen: I like that analogy — especially because both “The Shape of Water” and “Nomadland” are Searchlight movies. They just kind of know how to run a frontrunner campaign better than anyone else. I can’t imagine anyone who liked “Promising Young Woman” would love the comparison to “Three Billboards” — a polarizing Best Picture almost-winner if there ever was one — but I’d have to imagine Team Focus would sign up right now for a comparable two Oscar wins. Not that it would be such an upset to consider: The safe bet is that “Promising Young Woman” gets Best Actress for Carey Mulligan and Best Original Screenplay for Emerald Fennell. But while it does seem like it would be the most polarizing movie of the bunch, I wonder if that’s even true. There’s deep passion for the film and its challenging tonal jumps have seemingly been embraced across the board. It would absolutely be a shocking Best Picture winner, but no more than “Nomadland” or “Minari.” It feels like a year where no matter what movie wins, the selection will be unlike any previous Best Picture winner in history. Which is maybe why we are both soft on “Mank” and “The Trial of the Chicago 7.” Bona fides and acclaim aside, each film feels like a Best Picture winner of the past, not the present. But both have at least one Gold Derby Expert out on a limb predicting a victory — which is more than I can say for “Promising Young Woman” at the moment. Let’s go big galaxy brain here: Is there any chance either film can win?

joyceeng: It’s true. There is a lotta passion for “Promising Young Woman,” and not just on the internet as it’s done well everywhere. And with the younger and more international membership, that could offset however low we might think the older guard or its detractors would rank it. I suppose “Chicago 7” could also be the “Three Billboards” here since the directing branch thoroughly rejected both. But it’s obviously weaker because it doesn’t have two guaranteed acting wins, let alone one, and it didn’t win the drama Globe like “Three Billboards” did when it was predicted to. It’ll need a big guild victory or two, like PGA, SAG or WGA, the last of which is Sunday and where Fennell is predicted to beat Aaron Sorkin, to keep pace. And “Mank,” well, it’s fifth in the odds now and we’ll never know the truth, but I would not be surprised if it ultimately winds up last in the final count. No shade. Someone’s gotta be last and it feels like the nominee with the least passion. “Mank” had some big misses, like Best Original Screenplay. For a movie about an Oscar-winning original screenplay. Meanwhile, that “bottom tier” of “The Father,” “Judas and the Black Messiah” and “Sound of Metal” all over-performed one way or another. Can one of them pull off a surprise?

SEE What comes next after history-making Oscar nominations: Experts slugfest

Christopher Rosen: Well, no, not at all. But if I were to rank them, I’d put “Sound of Metal” ahead of the others. That’s a total feel guess, but I just think its combination of nominations — while similar to “The Father” — puts it above the rest. There’s a passion about that one, and I’ll die on the hill that Darius Marder was the No. 6 choice for Best Director (not that we’ll ever really know). But I wouldn’t ever go out on that limb. Besides, if I’m going to predict a long shot victory for Team “Sound of Metal” it’ll be in Best Actor, where I think Riz Ahmed could give Chadwick Boseman a run before this is over.

joyceeng: Agreed. I don’t know anyone who does not like that movie. And not to run the exhausted “Whiplash” comparison into the ground, especially since they’re very different types of films, but their runs and audience responses are very similar, minus a locked supporting actor award (though you’d know how much I’d love it if my man Paul Raci somehow wins). Maybe the next drummer drama can go all the way.