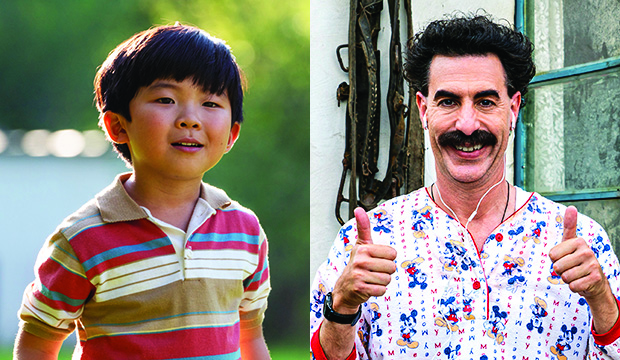 Welcome to Oscar Experts Typing, a weekly column in which Gold Derby editors and Experts Joyce Eng and Christopher Rosen discuss the Oscar race the same way you’ve been communicating with your coworkers for the past year: via Slack. This week, with Oscar nominations just days away, we discuss our no guts, no glory predictions.

Christopher Rosen: Joyce, we’ve made it. The longest Oscars season in history — and perhaps the hardest to predict in years — has reached the starting line? On Monday, nominations for the 93rd Academy Awards will finally be announced — and like Punxsutawney Phil seeing his shadow, the event puts us almost six weeks away from the big show. We’ve made various Oscar predictions throughout awards season — I still fondly remember what I’d like to call my Jared Leto phase — so I’d like to use our final bit of typing before Monday morning to revel in our long shots. I’ll start — and with Best Supporting Actor since I’m feeling Leto-y. The hill I’ve chosen to die on in that category is not the expected trio of frontrunners (Daniel Kaluuya, Leslie Odom Jr. and Sacha Baron Cohen) nor stable contenders like Leto or Chadwick Boseman, but with Alan Kim and David Strathairn. I have them both getting in: the precocious Kim has come on strong at the right time, winning Best Young Performer at the Critics Choice Awards, where his tearful speech launched a million memes. With “Minari” looking like a rock-solid contender across the board — and the film’s particular muscle at the Screen Actors Guild Awards — I think the 8-year-old Kim could be the first kid nominated for an Oscar since Quvenzhane Wallis and one of the youngest nominees ever. As for Strathairn, well, who says you can’t throw a Hail Mary in the first quarter? He has shown up nowhere and his nomination would be kind of a total shock. But I maintain that “Nomadland” is such a beloved frontrunner that it could surprise with more than its expected six nominations on Monday. We’ve got it penciled in for Best Picture, Best Director, Best Actress, Best Adapted Screenplay, Best Editing, and Best Cinematography — but I think Strathairn gets in as the tide rises around his work. It helps that he shares scenes with the dynamic Frances McDormand at her absolute best and matches her in subtle emotion and flinty determination. What do you think? Am I all guts, no glory with these picks?

joyceeng: Have we made it? I feel like I’m still in suspended animation. But perhaps it’s fitting that the nominations are happening on the Ides of March. Beware indeed. I support your Kim and Strathairn picks and I don’t think either is an absolutely wild prediction. I, too, had a Jared Leto phase, as you know, and after dropping him, I had Strathairn in for a hot minute before replacing him with Kim. As we’ve discussed, Strathairn would be your tried-and-true supporting coattail. Also, after Tuesday’s BAFTA and DGA mayhem, I realized that “Nomadland” got nominations in seven of the eight BAFTA categories in which it was longlisted. The only one it missed was supporting actor for Straithairn and you can argue he would’ve gotten in without the new jury system. Kim did get in at BAFTA, but any surplus of Oscar votes he got from that is probably negligible since voting closed the next day. Oscar loves little girls more than little boys, so that hurts, but he is the most adorable kid you ever did see. And I am encouraged by “Minari’s” good showing this week with PGA, DGA and ACE Eddie noms. Going back to our pal Jared, while I dumped him, I still have “The Little Things” represented as I added Thomas Newman’s score into my five. No matter what you think of the film, the score is pretty good, and Newman, the eternal bridesmaid, has shown a knack for getting surprising nominations. I call this the “Passengers” Rule. But am I making too big a deal out of a little thing?

Christopher Rosen: I am nothing if not absolutely obsessed with Best Score and while I share your sentiment on Thomas Newman — and could totally see someone like him breaking through with a surprise nomination — I’ve got my boy Ludwig Göransson stealing the spot most people have earmarked for Alexandre Desplat and “The Midnight Sky.” Nothing against that movie or Desplat, but it’s hard to imagine less buzz around a supposed slam-dunk nominee at the moment. I just think out of sight, out of mind will push him out in favor of the boom-y “Tenet” score. (I’ve got the other expected contenders rounding out my top five there: “Soul,” “Mank,” “News of the World” and “Minari.”) Speaking of music, where are you on Best Original Song? I’ll tell you where I’m at: with both “novelty” options — “Husavik” from “Eurovision Song Contest” and “Wuhan Flu” from “Borat Subsequent Moviefilm” — nominated among the five. My thinking here is, well, why not? “Husavik” is an absolute banger and should probably win in this category if we’re being honest. And while “Wuhan Flu” will probably not age as well as something like “Blame Canada,” there is a legacy of joke-y musical numbers surfacing here — and I’m firmly in the camp of “Borat Subsequent Moviefilm” getting multiple nominations, including Best Picture. Wa wa wee wa?

joyceeng: Wow, I mean, that would be inspired if both “Husavik” and “Wuhan Flu” made it in. Also, imagine the latter’s performance on the show. I only have “Husavik” making it. I’ve been hope-dicting it since the beginning and I sorta feel like it’s too late to turn back now. It is the best song of the bunch, though that hasn’t stopped voters before from snubbing the cream of the crop (#justice4glasgow). Not to invoke the name of the film of another contender in this category, but since you’re all in on “Borat,” I’m assuming you also have it in Best Adapted Screenplay, where the original landed 14 years ago. I do not, but I do have “The White Tiger” in that open fifth slot after the consensus four of “Nomadland,” “One Night in Miami,” “Ma Rainey’s Black Bottom” and “The Father.” And I added it before we learned that the Jonases will be announcing the nominations. It was a well-received film and the script got noms at WGA and BAFTA — the former thanks to other films’ ineligibility and the latter in a non-juried vote, so that kind of evens out? Will this tiger earn its Oscar stripes?

Christopher Rosen: Lol, not only do I have “The White Tiger” in there — the power of Priyanka Chopra Jonas is too strong to discount — but I also kept “Borat” among the nominees. Those came at the expense of “The Father,” which I know is good and everyone has predicted for more than a year. But, man, do I think that movie should have been released by now. That it’s still not really out — playing in empty theaters rather than appearing via on-demand like, say, “The Mauritanian” — makes me question its bona fides as a contender. There was a point where I even bumped Olivia Colman from Best Supporting Actress before I thought better of going out on such a limb. Speaking of which, let’s end there with our favorite category. You could tell me any combination of actresses received a nomination there on Monday and I’d believe you. Right now, my five are Colman, Maria Bakalova, Youn Yuh-jung, Amanda Seyfried and Glenn Close. Chalk, as it were. But I could see something wacky happening there? You’ve covered that race extensively — what is your take?

joyceeng: Ah, yes, my favorite race! I have four of your five, with Jodie Foster instead of Seyfried. Who would’ve thought that two Best Actress nominees from 32 years ago could find themselves against one another again? Ostensibly Close is the most vulnerable, and we don’t need to go over why again, but I can picture her sneaking in since there’s barely any consensus. Even though this category is so unpredictable, I’m trying not to overthink it and just enjoy the ride. If TPTB were smart, they’d save this category for last on Monday and announce the five in no particular order like how they did eight years ago when we were all waiting for Ben Affleck in Best Director and got Benh Zeitlin instead. Chaotic evil activated.