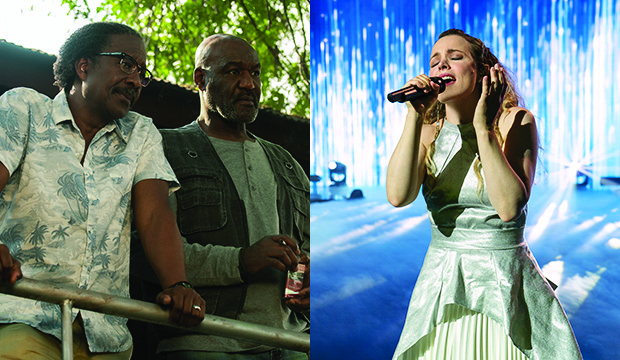 Welcome to Oscar Experts Typing, a weekly column in which Gold Derby editors and Experts Joyce Eng and Christopher Rosen discuss the Oscar race the same way you’ve been communicating with your coworkers for the past year: via Slack. This week, as Oscar nomination voting gets underway and runs through Wednesday, March 10, we make our own endorsements.

Christopher Rosen: Hello, Joyce, and welcome to a special day! Almost 13 months after last year’s Oscars season came to a rousing conclusion with “Parasite” crowned Best Picture, voting for this year’s Academy Awards has finally officially begun. That has me excited, even with the ceremony still literal weeks away, and it feels like the right time to use our typing to stump for some outside contenders. So with my best Melissa Leo voice activated, allow me to begin by asking you and everyone else to consider “Da 5 Bloods.” Spike Lee‘s Vietnam War epic came out in June, so it’s no wonder the Netflix film hasn’t been top of mind lately. But maybe it’s back on the upswing? The film scored big at the Screen Actors Guild Awards (Best Ensemble and Best Supporting Actor for Chadwick Boseman, as well as Best Stunt Ensemble) and is a sizable factor at the Critics Choice Awards this weekend (where Delroy Lindo is among the Best Actor nominees). Plus, in a counterintuitive way, its exclusion from the Golden Globe Awards — where Lee’s film was an egregious snub across the board — kept “Da 5 Bloods” in the conversation more than any actual nominations and subsequent losses might have done. Netflix has seemingly remained committed to the film, too: This week, I noticed a marked uptick in promoted tweets about “Da 5 Bloods,” and Lee has remained his film’s biggest cheerleader on the circuit. (His interview with our own Daniel Montgomery, which published Friday, is absolutely worth a watch.) Am I overthinking things, or are we headed to a “surprise” strong showing for “Da 5 Bloods” when Oscar nominations are announced later this month? Best Picture, Best Director, Best Actor, Best Supporting Actor? What do you think, and who are you rooting for?

joyceeng: Sorry about that, was just grabbing my (fake) white fur coat for you to consider. Yes, the last-minute push for “Da 5 Bloods” has been pretty much inescapable this week if you were online — with not one but two hashtags! It would be a worthy nominee across the board and we’ll get a bit more clarity on its chances in the top races after Producers Guild and Directors Guild Awards nominations on Monday and Tuesday — I don’t have high expectations for BAFTA nominations, also on Tuesday (we’ve waited so long and now we’re just getting an onslaught of stuff). But even if it’s a no-show at those places, I would not be shocked if it popped up on Oscar nomination morning outside of Boseman, who appears to be the safest pick for a nom for the film right now. The Picture, director and actor races are crowded, but we’ve seen Oscar voters zag while everyone else has zigged before, especially in director. As for my FYC, it would probably come as no surprise to you that I am stumping for “Sound of Metal,” for Best Picture and Best Supporting Actor for Paul Raci in particular. I still have Raci in, but I recently removed the film from Best Picture because 1) reverse psychology, and 2) it sort of feels like the prolonged season has blunted its momentum, which was peaking in December and January. What do you think? Can it drum up major nominations outside of Riz Ahmed?

Christopher Rosen: Hey, there are worse hills to die on, for sure. In your favor: Best Supporting Actor feels like it could be ripe for a surprise or two — and while we’ve had some fun with Jared Leto these last few weeks, he is far from a sure thing for that ostensible final spot. That would, conceivably, open up the fifth position for Raci or maybe someone else. Bad news: I’ve slowly begun to convince myself that “someone else” in this case will not be Raci, but rather David Strathairn — a nominee in the tradition of Marina de Tavira and Jacki Weaver (a shock nominee in a Best Picture contender that voters simply really loved). But since this is about stanning for our favorites, I’d be remiss if I didn’t single out a couple of real long-shots who would be in the conversation if there was any justice: Yeri Han for “Minari” and Lakeith Stanfield for “Judas and the Black Messiah.” There were a few weeks where I had Han in that last Best Actress slot after Viola Davis, Carey Mulligan, Frances McDormand and Vanessa Kirby — but following Andra Day‘s surprise Globe win, I slotted Day back in among the final five. But Han is really incredible in “Minari” and I’d argue she not only has the most difficult role (audience sympathies do not necessarily lie with her) but the key part. She’s a perfect balance to Steven Yeun and it’s hard to imagine his performance working as well without Han on the opposite side. That’s also why I think Stanfield should have more juice in what is an admittedly packed Best Actor race (I can hardly find room for Lindo or even our personal fave, Ben Affleck): caught in between Fred Hampton and the FBI, he’s got a tricky position and nails the nuance required — and his morally questionable character is a great counterweight to Daniel Kaluuya‘s grace and determination. Stop me before I suggest we should just expand these acting categories to seven or eight nominees, Critics Choice Awards-style, and give me a couple of your Hail Mary hopes.

joyceeng: Strathairn would be a classic coattail nominee — and the supporting categories love ’em some coattails in strong Best Picture contenders. His performance is subtle like Raci’s, but he has the benefit of being in a top two film. I second Stanfield and Han. We’ve already discussed in our Best Actress type-fest last month how Han has been robbed blind this season for a performance that really holds the whole film together even though it’s not quite obvious to the naked eye right away. But yeah, with Day’s Globe win, the five slots appear to be locked up. But hey, that’s what we thought four years ago and Amy Adams was AWOL. Sticking with Best Actress, my Hail Marys would be Sidney Flanigan, who’s devastating in “Never Rarely Sometimes Always” — as many suspected, Flanigan’s shaping up to be an early critics’ favorite who can’t keep chase — and Elisabeth Moss in “The Invisible Man.” That nomination is not going to happen — hi, genre bias — but how cool would that be? I wouldn’t say that was the best performance of the year, but that remake would not work as well as it did without Moss’ haunting turn that made us invested in the stakes and not bat an eye when she was fighting air basically. Jumping over to song, I — and I know you feel the same — would be all in on a nom for “Husavik.” Team “Eurovision” is also leaving no stone unturned this week.

Christopher Rosen: “Husavik”! I am way in for that nomination as it’s an actual song that is good. But I’m still licking my wounds in that category from the EGREGIOUS short-list snub of Taylor Swift for “Only the Young.” That song is a banger, it plays a key part in “Miss Americana,” and I still can’t believe the academy passed up the chance to have Swift’s star power at this year’s ceremony. (I know, I know, she’s not an Oscars favorite, boo!) But let’s wrap it up with one last question: As we discussed earlier this week, just how many ties will we see at the Critics Choice Awards on Sunday?

joyceeng: Taylor can console herself with her five wins at the inaugural Gold Derby Music Awards. Critics Choice ties… not to quote Amanda Seyfried‘s first film, but the limit does not exist. Seeing as how the Globes made the Best Actress and Best Supporting Actress races even more haywire than they already were, let’s say at least two. Very excited to see how ties work over Zoom!