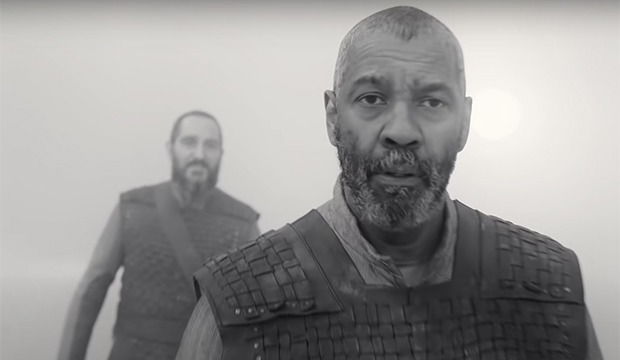 Welcome to Oscar Experts Typing, a weekly column in which Gold Derby editors and Experts Joyce Eng and Christopher Rosen discuss the Oscar race — via Slack, of course. This week, our first entry of the season, we discuss the just-premiered “The Tragedy of Macbeth” and the crowded lead acting races.

Christopher Rosen: Hello, Joyce! It’s officially fall and that means only one thing: We’re back in Oscars mode and I, for one, am hyped to type about this roster of movies for the next six months. That’s actually legitimate and not even sarcasm: as we discussed this week, even in these earliest of days, the season is shaping up to be one of the starriest in recent memory. There are new movies from Oscar winners Steven Spielberg, Joel Coen, Jane Campion, Guillermo del Toro and Adam McKay all in contention, along with fresh work from longtime favorites and nominees such as Ridley Scott (times two!), Paul Thomas Anderson, Kenneth Branagh and Denis Villeneuve. The acting races, meanwhile, are stuffed with the best of the best the A-list has to offer: Leonardo DiCaprio, Will Smith, Bradley Cooper, Denzel Washington, Frances McDormand, Meryl Streep, Sandra Bullock, Jennifer Lawrence, Timothee Chalamet, Cate Blanchett, Lady Gaga, Adam Driver, Benedict Cumberbatch, Jessica Chastain and Andrew Garfield, to name but 15 of the big stars we’ll be chatting about for weeks on end. But for today, I’d like to start things off with a little tragedy… of Macbeth, that is! (Oscars season is already in full swing but my transitional zinger game still needs some seasoning.) “The Tragedy of Macbeth” just premiered for press and industry personnel at the New York Film Festival ahead of its world premiere on Friday night and the reviews are exactly as one might expect from an adaptation of Shakespeare starring Denzel Washington and Frances McDormand: they’re good with particular praise heaped upon the stars. I believe we both have Washington firmly entrenched among the Best Actor contenders — he feels like a true lock for a nomination at this point, which is lol to suggest but also probably real. McDormand is maybe a bit trickier to predict: the three-time Best Actress winner and reigning champion herself recently called Lady Macbeth a “small supporting role” and it feels like she could wind up in either actress category. I currently have McDormand landing her now-annual Best Actress nomination, but if she lands in the alternate category, do you think she has what it takes to win — sight unseen for us and six months before the show?

joyceeng: Well, like I said before, Katharine Hepburn is shaking in her grave. Fran is coming! She should go lead not just to match the Great Kate’s exact record but because she’s undefeated in lead and has lost all three of her supporting bids. It’s like how Jean Smart is 4/4 in comedy at the Emmys but cannot win in another genre. I hadn’t put McDormand in either category yet because of the category uncertainty, but I just slotted her into Best Actress. I don’t have her in first, but anyone would be a fool to count her out after she just doubled her Oscar haul with those Best Actress and Best Picture wins five months ago (lol at us being closer to this year’s Oscars than next year’s Oscars). It would also be Hepburn-esque of her to bag back-to-back Best Actress Oscars in her 60s. But, you know, Fran has won a lot lately. Denzel has not. This will be the 20th anniversary of his Best Actor triumph for “Training Day.” He ostensibly came close five years ago with “Fences” and then got in the following year for a movie maybe 11 people saw, “Roman J. Israel, Esq.” He feels like someone who should have three Oscars. Is this the time? And if it is, this means he’d deny Will Smith again. Hilary Swank and Annette Bening who?

SEE Oscar Experts slugfest: Is ‘Beflast’ the one to beat (for now)?

Christopher Rosen: It really does feel like Denzel should have at least a few Best Actor Oscars — and, dare we dream, even just *one* BAFTA nomination while we’re at it? — so it goes to reason that he could, once again, stymie Will Smith en route to a Best Actor win 20 years apart. And why not? Somehow, no one has ever won an Academy Award for playing Macbeth, and while I have Will firmly at the top of my predictions, it’s a long season and I could easily make a counter-argument to his possible “King Richard” win — starting with the fact that during the movie’s big climactic tennis match, Richard is a literal bystander to his daughter’s on-court performance. Washington is also the kind of guy who doesn’t appear to suffer many fools — he’s a mirror image of Frances McDormand in that way, and we’ve seen how well that has played among Oscar voters. So we’re left with Smith and Washington, two of the biggest leading men of the last 30 years, at the top of this Best Actor race, with the potential to have the final three slots filled out by an Avenger (Benedict Cumberbatch), the star of the biggest television show in the last decade (Peter Dinklage), a former Spider-Man (Andrew Garfield), a former Inside the Actors Studio audience member (Bradley Cooper) or the King of the World (Leonardo DiCaprio). Joyce, this is shaping up to be a Best Actor category in the mold of this year’s Best Actress melee, loaded with favorites and narratives where everyone has a case to win, but only one person can prevail. What’s your top-five look like today?

joyceeng: Excuse you, I believe his name is Will Tippin!!! I mean, we’ve discussed how star-studded this lineup could be, although I would like to see a lesser-known star slip in who’s not really on anyone’s radar right now or is being underestimated because that’s always nice/fun. That being said, my five is all above-the-line names at the moment: Big Willie Style, Denzel, Benedict, Will Tippin and Leo. As I’ve mentioned, I moved Will into first after the reception to “King Richard” and his performance at Telluride, and while I wouldn’t say he’s overdue for an Oscar, he checks off a lot of boxes of a potential winner. I’ve always thought he was underrated as a dramatic actor, partially because of the types of projects he usually does, and this could be the film where everything comes together for him between critical, commercial and populist success. I also feel like many people wouldn’t mind seeing him win an Oscar? Not to “Blind Side” this up again, but it feels like a Bullock sitch developing. Plus, two of his rivals, like me, are tennis stans, so maybe they’re cheering for him too. 🙃 But if it’s not Will vs. Denzel, who do you think could pull it off?

Christopher Rosen: I think the obvious alternate is Benedict Cumberbatch, who has gotten the best reviews of his career for “The Power of the Dog,” but I’m going to use this moment to evangelize about Dinklage. As mentioned in our chat this week, unofficially, I might have been the biggest “Cyrano” supporter at Telluride and a big reason for my standom was Dinklage himself. It’s a high wire performance — he has to sing and even rap (gulp but fortunately not much) and balance comedy with deeply felt drama. He’s a romantic lead and also his own worst enemy. A world weary cynic who happens to believe in love over all else. It’s great meaty stuff and I could definitely see a world where he kind of sneaks ahead as the A-list stars battle each other out.

joyceeng: I’ve already made the Peter Dinklage-Bryan Cranston comparison twice, so I’m not gonna go for a hat trick (yet), but I can see him getting in if people really take to that performance. And lest we forget, he got an individual Screen Actors Guild Award nomination for “The Station Agent” way back in 2004, as in pre-Westeros. Imagine if we have two nominees from films based on plays. Between those and the Shakespearean title of “King Richard,” the Oscars could become the Tonys, except they wouldn’t go 84 years between ceremonies.