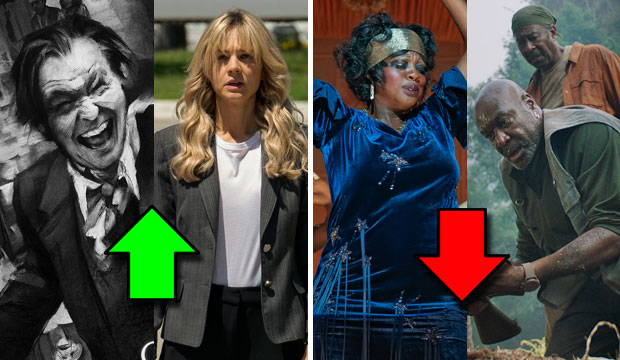 The Golden Globe nominations were announced on Wednesday, February 3, and in an uncertain year marred by the COVID-19 pandemic, they gave us an indication of the trajectory of the overall awards race that will culminate with the Oscars in April. So which films are trending up, which films lost ground, and which are in about the same position as before? Let’s break it all down.

“The Father” — This acting showcase about a man with dementia got the expected nominations for Anthony Hopkins and Olivia Colman. Its writing nomination for Florian Zeller and Christopher Hampton wasn’t surprising either. But it also managed to sneak into the top category, Best Film Drama, overtaking contenders like “One Night in Miami” and “Ma Rainey’s Black Bottom.” That was a big get and could be a sign of its strength going forward.

“Mank” — This film about the title “Citizen Kane” screenwriter didn’t surprise us with any of its nominations, but it also didn’t miss anywhere crucial. It’s up for Best Film Drama. Both Gary Oldman and Amanda Seyfried were recognized for their performances. David Fincher is up for directing. His late father Jack Fincher picked up a posthumous bid for writing. And Trent Reznor and Atticus Ross made the cut for their score. That gives it six noms overall, more than any other film, which is a good position too be in.

“Promising Young Woman” — The nomination for Carey Mulligan was expected, but we weren’t anticipating four bids for the hotly debated revenge thriller. It’s up for Best Film Drama, and Emerald Fennell earned nominations for both writing and directing. Perhaps we should start considering this a top Best Picture Oscar contender and not just a Best Actress hopeful.

“Da 5 Bloods” — This Spike Lee joint about Black Vietnam vets didn’t get a single nomination, not for Delroy Lindo‘s lead performance, not the late Chadwick Boseman for his supporting turn, not for its score, and not for Best Film. You can’t chalk it up to the Hollywood Foreign Press Association being biased against Lee; they nominated his last movie, “BlacKkKlansman” (2018) four times. It will have to hope other awards groups are more fond of it.

“Ma Rainey’s Black Bottom” — Viola Davis and the aforementioned Boseman were our predicted Golden Globe front-runners for their leading roles in this film, and they both were nominated … but that’s it. This adaptation of August Wilson‘s play didn’t show up in Best Film, Best Director or Best Screenplay.

“Nomadland” — This acclaimed story of a woman living out of her van wasn’t the top film on nominations morning, but it got the four bids we were predicting: Best Film Drama, Frances McDormand for acting and Chloe Zhao for writing and directing. Steady as she goes for the current Oscar front-runner.

“The Trial of the Chicago 7” — This docudrama could have done a wee bit better: Sacha Baron Cohen is its only acting nominee when it had other viable candidates like Mark Rylance and Yahya Abdul-Mateen II. But Golden Globe darling Aaron Sorkin earned his eighth writing nomination and his first directing nomination, the movie is up for Best Film Drama, and it even received a bid for songwriting. With five total citations it’s right behind “Mank” for the biggest nominations haul.