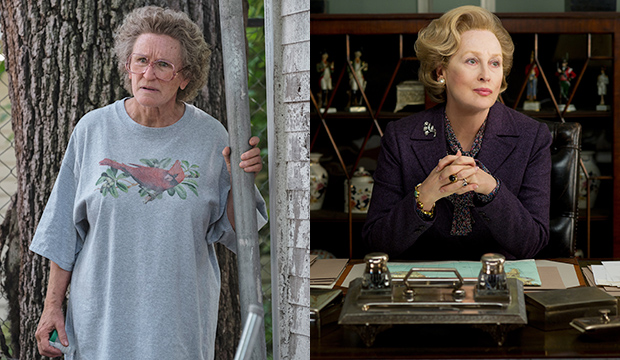 “Hillbilly Elegy” isn’t exactly one of the critics’ favorite films of 2020, but that might not stop it from receiving multiple Oscars. Glenn Close is expected to land her eighth nomination for her performance as Mamaw in the film, following bids at the Screen Actors Guild Awards, Golden Globes and Critics Choice Awards, and some are speculating it may finally be time to give her the Oscar. The actress may actually be aided by the potential presence of “Hillbilly Elegy” in the Best Makeup and Hairstyling lineup, as it made the 10-film shortlist and should be a sure thing for a nomination — it’s in second place in Gold Derby’s odds — considering the heavy makeup on both Close and co-star Amy Adams.

Should Close land a Best Supporting Actress nom on top of the film’s makeup and hair team getting into their category, there is a plausible scenario in which “Hillbilly Elegy” wins both awards on Oscar night. Doing so would mean repeating the success of 2011’s “The Iron Lady,” another film with mediocre reviews that nonetheless won Best Actress for Meryl Streep and Best Makeup and Hairstyling for transforming the legendary actress into Margaret Thatcher. Ironically, Close was there to witness those wins in person, with Streep and “The Iron Lady” beating her and her film “Albert Nobbs” in the same two categories.

For better or for worse, Oscar voters love to see transformations when picking their acting winners, and a huge element of that is a strong makeup and hair department. Acting winners from the 2010s whose films have gotten nominated for makeup and hair outside of Streep include: Anne Hathaway (2012’s “Les Misérables”); Matthew McConaughey and Jared Leto (2013’s “Dallas Buyers Club”); Leonardo DiCaprio (2015’s “The Revenant”); Gary Oldman (2017’s “Darkest Hour”); Joaquin Phoenix (2019’s “Joker”) and Renée Zellweger (2019’s “Judy”). Of these, “Les Misérables,” “Dallas Buyers Club” and “Darkest Hour” all won those additional Oscars for their cosmetic achievements.

It’s easy to see a clear pattern over the 2010s of the Best Makeup and Hairstyling category being tied closely with acting nominees and winners, which wasn’t always the case. The two most recent makeup winners, 2018’s “Vice” and 2019’s “Bombshell,” did not win for acting, but they did have multiple nominees in the acting categories. “Hillbilly Elegy” will likely be a continuation of this general trend, but the question then becomes whether it can follow “The Iron Lady’s” path of winning for acting and makeup, which would surely be satisfying for Close after those losses for “Albert Nobbs.”

PREDICTthe 2021 Golden Globe winners through February 28
Oscar odds for Best Makeup and Hairstyling
Which will make the final five?