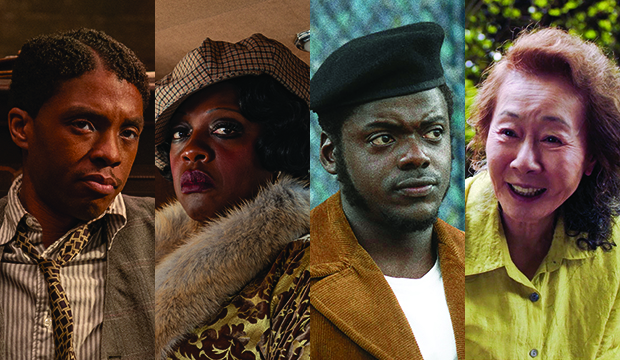 The Screen Actors Guild Awards have one of the best track records with the four Oscar acting categories: SAG has only mismatched five times in Best Actor, seven times in Best Actress, nine times in Best Supporting Actor and eight times in Best Supporting Actress. That’s pretty good news for SAG champs Chadwick Boseman (“Ma Rainey’s Black Bottom“), Viola Davis (“Ma Rainey’s Black Bottom”), Daniel Kaluuya (“Judas and the Black Messiah”) and Yuh-Jung Youn (“Minari”). But while SAG matches up with Oscar a lot in the categories individually, it has comparatively less success batting 1000 in all four categories in one year.

In its 26-year history, SAG has directly matched 4/4 with Oscar only eight times, most recently last year with sweepers Joaquin Phoenix (“Joker”), Renee Zellweger (“Judy”), Brad Pitt (“Once Upon a Time in Hollywood”) and Laura Dern (“Marriage Story”). That was the second season with a complete 20/20 acting sweep of the Golden Globe, Critics Choice Award, SAG, BAFTA and Oscar after the 2017 class of Gary Oldman (“Darkest Hour”), Frances McDormand (“Three Billboards Outside Ebbing, Missouri”), Sam Rockwell (“Three Billboards Outside Ebbing, Missouri”) and Allison Janney (“I, Tonya”).

SAG typically goes 3/4 with Oscar, which has occurred 11 times. The most recent one was four years ago when Denzel Washington (“Fences”) disrupted Casey Affleck‘s dominant season for “Manchester by the Sea” with a surprise SAG Awards victory — his first.

Just four times have SAG and Oscar gone 2/4. That happened two years ago when the academy anointed Olivia Colman (“The Favourite”) Best Actress instead of SAG champ Glenn Close (“The Wife), while SAG winner Emily Blunt (“A Quiet Place”) was snubbed by the Oscars, which went for the SAG-snubbed Regina King (“If Beale Street Could Talk”). There have been three instances of 1/4 — all in the early 2000s — and SAG has never gone 0/4.

That being said, some of these cases were forced splits, whether due to category confusion — like Kate Winslet campaigning and winning in supporting for “The Reader” (2008) all season long before getting nominated and winning in lead at the Oscars — or snubs, like Blunt/King or SAG champ and Oscar snubbee Idris Elba for “Beasts of No Nation” (2015).

Also of note is that the 4/4 matches started to pick up after the Oscars moved from March to February (in a normal year) 17 years ago — seven of the eight have occurred since then and six of them since 2009 — as there has been far more uniformity and rubber-stamping among the precursors. The stats point to SAG probably getting one category wrong this year, and you don’t have to be a rocket scientist to think that it would be in Best Actress, the most up-in-the-air race that only matches 4/5 with the SAG nominees, Andra Day (“The United States vs. Billie Holiday”) being the SAG-snubbed outlier.

*Del Toro won the SAG in lead and the Oscar in supporting while Harden was not nominated at SAG.