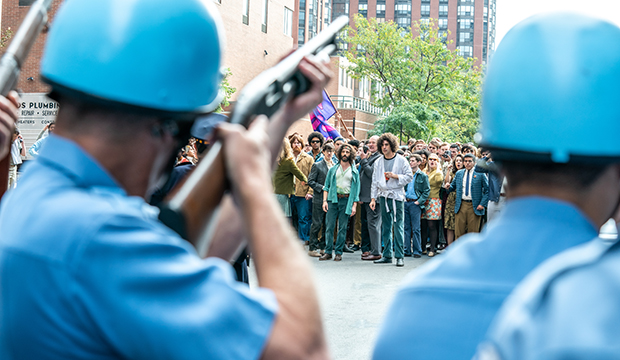 “The Trial of the Chicago 7” won the ACE Eddie Award for Best Edited Drama Film on Sunday, making it a top contender to win Best Film Editing at the Oscars. Editor Alan Baumgarten defeated two editors he will also face at the Oscars — Chloe Zhao for “Nomadland” and Mikkel E.G. Nielsen for “Sound of Metal,” with the latter expected to be “Trial’s” biggest competition after his BAFTA win. If the cards fall as awards prognosticators are expecting them to, “The Trial of the Chicago 7” would join a very small group of films to only win Best Film Editing.

“Trial” has five other Oscar nominations but is not projected to win any of those categories, according to the latest Gold Derby odds. If the courtroom drama walked away with just Best Film Editing, it would become only the ninth film to do so. The first was “Eskimo” (1934), which won the inaugural editing award at the seventh ceremony. It happened numerous times in the ’40s with “North West Mounted Police” (1940), “The Pride of the Yankees” (1942), “Air Force” (1943), “Body and Soul” (1947) and “Champion” (1949). It would be almost 20 years until the next sole editing winner: “Bullitt” (1968). Fast-forward several decades and the last to accomplish this feat was “The Girl with the Dragon Tattoo” (2011).

SEE Will all 8 Best Picture nominees win at least one Oscar?

What puts “The Trial of the Chicago 7” in an even more unique position is that of that group, only one film had a nomination in Best Picture: “The Pride of the Yankees.” As unlikely as a lone editing win would be, “Trial” does have a level of energy to it in the individual courtroom scenes and protest sequences that helps it stand out against subtler films like “Sound of Metal” and “Nomadland.”

The film has demonstrated that there is a decent amount of passion for it in the industry, and not a moment too soon. Besides the ACE Eddie Award, “Trial” grabbed the Screen Actors Guild Award ensemble prize as well, finally showing the strength that, earlier in the season, some awards experts predicted it would have to make it a spoiler for frontrunner “Nomadland.” Assuming it wins Best Film Editing, stats suggest it will pick up another Oscar somewhere else, like Best Original Screenplay or even Best Picture, but if not, it can at least join an eclectic group of films to only be singled out for their editing room craftsmanship.