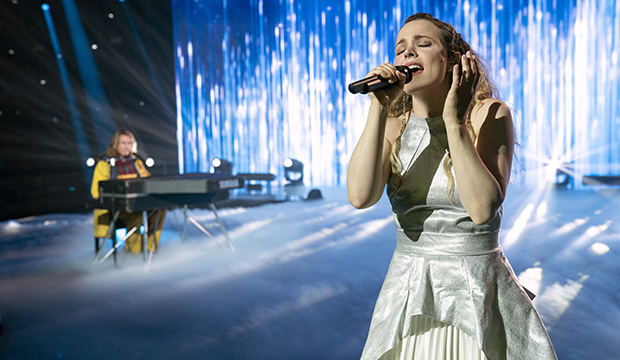 Outside of the wildly unpredictable Best Actress race, there is one other Oscar category that feels somewhat up in the air: Best Original Song. The odds will tell you otherwise: “Speak Now” from “One Night in Miami” is the overwhelming favorite with 10/3 odds and more than 3,200 votes. No other nominee — “Io Si (Seen)” from “The Life Ahead,” “Husavik” from “Eurovision Song Contest: The Story of Fire Saga,” “Fight for You” from “Judas and the Black Messiah” and “Hear My Voice” from “The Trial of the Chicago 7” — has more than 900.

And yet there is no prevalent feeling that “Speak Now” is a lock here because this category is, um, very soft. Which is why you’d be a fool to count out “Husavik.” “Eurovision” is the least Oscar-friendly of the nominated films, but “Husavik” could very well have a thrilling moment in the sun like Lars (Will Ferrell) and Sigrit (Rachel McAdams) do. Here are six reasons why “Husavik,” written by Rickard Göransson, Fat Max Gsus and Savan Kotecha, could be seeing gold.

1. It’s important to the film
Best Original Song winners have ranged from the few inspired to the mostly lazy. The best kind of winners are songs that are integral to the film’s narrative, are actually good songs, and if they’re lucky, they’re also hits. “Shallow” from “A Star Is Born” (2018) checked all of these boxes with the added bonus of being sung by A-listers. None of this year’s nominees are hits like “Shallow” was and we can all debate if they’re good or bad (they’re all good songs, but if you ask me, “Husavik” is the best one), but there is absolutely no denying that only one nominee is vital to its film’s narrative, and that’s “Husavik.”

All the other four songs are end credits tunes; they’re thematically related to their movies, but they’re not part of them. On the other hand, “Husavik” is very much part of the “Eurovision” plot from the start of the film and is performed by Lars and Sigrit (McAdams’ vocals are by Molly Sandén) during the climax at the titular competition. In part-English and part-Icelandic, it’s an emotional, chills-inducing power ballad that’s an ode to their Icelandic hometown.

The question is if voters will watch “Eurovision” to appreciate “Husavik’s” use and importance in the context of the film. But even if they haven’t and they’re doing research on the song nominees, a simple Google search will pull up the performance scene from the movie (well played, Netflix, well played). The other nominees just have music videos, which is nice and fine, but if you watch them all back to back (like you can here), you know which one has the most impact on and connection to its film.

2. It’s the only non-end credits song
This is tied to the previous point. As aforementioned, the other four nominees are purely end credits songs, tacked on as you’re about to close out your screener/browser/app for an easy Oscar nomination/win (no shade, just facts). They’re not even played during the films over a montage or anything. Now if you haven’t seen these movies and only heard the songs or if you don’t care about this kind of stuff, it might not matter, but there are likely some voters who’d rather vote for a tune that wasn’t just played over a list of names.

3. It’s the apple in a bag of oranges
Excluding the all-Italian ballad “Io Si (Seen),” which brought perennial bridesmaid Diane Warren her 12th nomination, the other three nominees, “Speak Now,” “Fight for You” and “Hear My Voice,” are samey-samey. They’re all different, of course — especially “Fight for You” sonically — but they share similar themes as all three are socially relevant protest songs. Even their anthemic titles feel interchangeable. It could be a lot if you’re listening to them all in a row, at which point something like “Husavik” sounds like a breath of fresh air.

SEE Oscars: Listen to all the Best Original Song and Original Score nominees

4. There’s precedence for an unconventional win
As the type of song it is, “Husavik” wouldn’t be too strange of a winner — Oscar loves a power ballad — but the content of the song and a comedy like “Eurovision” aren’t usual Oscar bait. However, Oscar has surprised us before with its taste. A “Husavik” victory would not be unlike when Eminem‘s “Lose Yourself” from “8 Mile” (2002) triumphed, becoming the first rap song to do so, or when Three 6 Mafia‘s “It’s Hard Out Here for a Pimp” from “Hustle & Flow” (2005) won three years later. The former defeated the likes of U2 and Paul Simon while the latter prevailed over the one and only Dolly Parton, all of whom seem like far more Oscar-friendly or at least name-check-y choices.

But perhaps “Husavik” is most akin to “Falling Slowly” from “Once” (2007), another ballad duet between the film’s leads, also similar to “Shallow.” In hindsight, it feels crazy we were fretting so much over “Falling Slowly” because it was so obviously the best song in the lineup, but it was very much the underdog — a tiny song from a tiny movie — in a field that included three songs from “Enchanted,” which, sure, probably contributed to a vote-split. Just like “Falling Slowly,” getting the nomination was arguably the hardest part for “Husavik.” Last year, “Glasgow (No Place Like Home)” from “Wild Rose” was a gem, but it was snubbed.

What “Husavik,” “Lose Yourself,” “It’s Hard Out Here for a Pimp,” “Falling Slowly” and “Shallow” have in common is that they all hail from films that follow musicians trying to make it. Coincidence? I think not. All of them were also performed by the leads in important moments in their respective films except for “Lose Yourself,” but the track was played during the movie when Em’s Jimmy/B-Rabbit is writing rhymes for his demo. And while Rabbit doesn’t perform “Lose Yourself” to eviscerate Anthony Mackie‘s Clarence in the final rap battle, “Lose Yourself” is so specifically about his journey — the entire first verse is a CliffsNotes of the plot of “8 Mile” — while also being motivational that it feels very connected to its movie in a way that the generically inspirational lyrics of most of this year’s lineup do not, especially when compared to Lars and Sigrit’s tribute to their hometown. And like “Shallow,” “Lose Yourself” was a massive smash — not to mention, there are not many winners so iconic that they would get the whole Oscar audience singing along and giving a rousing standing O when they’re finally performed on the Oscar stage 17 years later.

5. There’s no dominant frontrunner
“Speak Now” has led the odds all season long, buoyed by the fact that it was co-written by eventual double nominee Leslie Odom Jr. (alongside Sam Ashworth) from a top Amazon contender, but the precursors have split: “Io Si (Seen),” written by Warren and singer Laura Pausini, nabbed the Golden Globe while “Speak Now” rebounded with the Critics Choice Award. “Husavik” also has a win under its belt for Best Original Song for Visual Media at the Society of Composers and Lyricists Awards. Only “Fight for You,” written by Grammy champ H.E.R., D’Mile and Tiara Thomas, and “Hear My Voice,” penned by Daniel Pemberton and singer Celeste, are win-less.

Then there’s the fact that “One Night in Miami” missed a Best Picture nomination, suggesting a lack of passion for the film. That doesn’t necessarily mean there’s no love for “Speak Now” or that people won’t vote for it, but it’s clear that the song that elicits the most passionate response from viewers is “Husavik,” whose video has close to 10 million views on YouTube. It’s a small fan base, but if Oscar voters feel the same way, it could be enough in an open race. And while Warren has the Globe and is overdue, “The Life Ahead” is an even smaller, lesser seen film that couldn’t even get traction for Sophia Loren in Best Actress.

6. Its campaign has been glorious
While its rival songs are being performed on this awards show or that talk show, Team “Husavik” has taken a different and adorably shrewd approach. Netflix has turned to the people of the real town of Husavik to stump for what is now their home anthem in a campaign dubbed An Óskar for Húsavík. There’s also an anti-campaign campaign video from “the JaJa Ding Dong Guy” vouching for “JaJa Ding Dong,” which admittedly is the superior track but is not up for the Oscar. On Wednesday, the eve of Oscar voting, Netflix dropped a video featuring Óskar Óskarsson, thus far the only Óskar in town who laments, “All we are missing in Husavik is another Óskar, the most beautiful name in the world.” If “Husavik” pulls this out with the help of Husavikians, this will be Iceland’s biggest moment in cinematic history since it emerged as a hockey powerhouse in “D2: The Mighty Ducks” (1994). Long overdue, honestly.

Meet Óskar Óskarsson, the friendly face of Húsavík — and a huge fan of Óscar season. pic.twitter.com/kFK04C4lYu