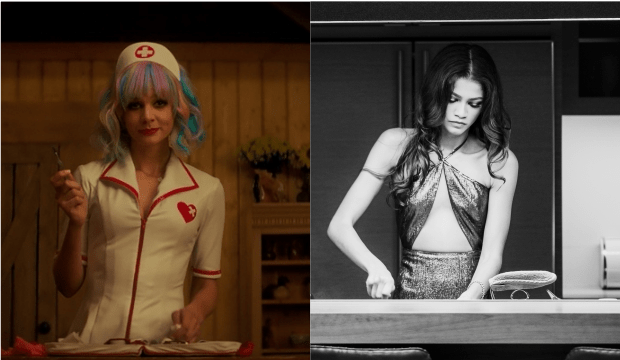 For months, Gold Derby Experts have predicted the Best Actress race at the 2021 Oscars will come down to a contest between heavy favorite Viola Davis for “Ma Rainey’s Black Bottom,” two-time winner Frances McDormand for “Nomadland,” and rising star Vanessa Kirby for “Pieces of a Woman.” But since November, two other actresses have vaulted into the increasingly crowded and hype-worthy field of contenders: Carey Mulligan for “Promising Young Woman” (5/1 odds) and Zendaya for “Malcolm & Marie” (9/1 odds).

A case could be made for each ascendant competitor ultimately winning the Best Actress prize. Zendaya, in fact, has exploded onto the charts since Netflix began screening “Malcolm & Marie” ahead of its February 5 debut, with five Experts predicting she’ll win it all. It’s not difficult to imagine why. In the film from writer-director Sam Levinson — who guided Zendaya to her Best Actress win at the Emmys for HBO’s “Euphoria” — the star plays a struggling actress who spends one very fraught evening battling with her boyfriend, a pompous first-time director (John David Washington). As Marie, Zendaya is given numerous lengthy monologues about such timely concerns as authenticity in art and who is afforded the opportunity to tell their own stories. She matches the verbose Malcolm beat-for-beat, hitting back at his aggressive bravado with what could only be described as a determined sadness in the righteousness of her beliefs. It’s a movie-star-making performance for Zendaya and confirmation of what “Euphoria” viewers and Emmy voters already know: she has the potential to be an awards force for years to come.

That’s likely what many Oscars voters felt back in 2010 when Mulligan was nominated for the first time thanks to her breakout role in “An Education.” But despite years of solid, critically acclaimed work since then — including in Steve McQueen’s “Shame,” Nicolas Winding Refn’s “Drive,” and Paul Dano’s “Wildfire” — Mulligan has never received a second nomination. That should change this year with “Promising Young Woman,” which finds Mulligan immersing herself in a difficult and unforgettable character in one of the season’s most discussed movies thus far. The British actress plays Cassie, an American woman at 30 years old whose life was unmoored following the death by suicide of her best friend, who was raped when the pair were in medical school. It’s a borderline unrecognizable turn for Mulligan, who many viewers associate with period pieces. “Imagine the cognitive dissonance of taking, say, Audrey Hepburn out of her midcentury roles and plopping her into a thoroughly 2020 movie about consent, revenge, and stalking your college acquaintances on Facebook. And imagine, in doing so, that she turned in the performance of her career,” Kyle Buchanan wrote in a New York Times profile of Mulligan in December.

By day, Mulligan’s Cassie works an unassuming job at a coffee shop and lives with her concerned parents; by night, she hits the local bars and clubs, pretending to be black-out drunk in an effort to have self-proclaimed “nice guys” attempt to take advantage of her without consent. The gambit, which she does with great frequency, almost always works — and writer-director Emerald Fennell takes great pride in upending the audience’s expectations by casting numerous actors associated with playing “nice guys” in their careers, including Adam Brody, Max Greenfield, Chris Lowell, and Bo Burnham.

“I never feel like I need to agree with everything that a character does for me to be along with the ride, and we never do with men,” Mulligan said to the Times. “Cassie has every right to be as closed down, as abrasive, as unpleasant, as vindictive as she likes, because she’s been through hell. But that doesn’t mean that we shouldn’t care about her.”

It’s the kind of film that all but forces a conversation — something that, at least anecdotally, has occurred since its release on video-on-demand last week. On social media, users have praised the film as one of 2020’s best and particularly singled out Mulligan’s work as transformative. She’s a dominant force onscreen, playing a complicated character who zigs when the audience thinks she might zag. It’s a performance not unlike Joaquin Phoenix in “Joker,” albeit without that film’s problematic baggage and blockbuster box office attention.

Does that mean Mulligan, like Phoenix last year, could eventually win Best Actress? Here’s some informed speculation that supports such an outcome: Oscar voters may decide Davis’s undeniable turn as Ma Rainey in the Netflix drama is more of a supporting performance, while McDormand is potentially undone by the fact that she only just won in 2018 for “Three Billboards Outside Ebbing, Missouri.” That would leave Mulligan in the driver’s seat — with Zendaya looming as the only thing standing between her and an Oscar.