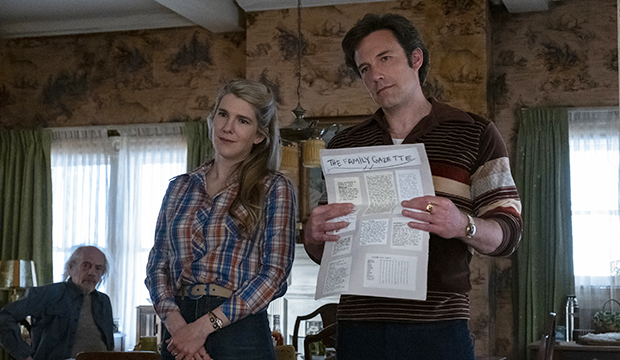 Welcome to Oscar Experts Typing, a weekly column in which Gold Derby editors and Experts Joyce Eng and Christopher Rosen discuss the Oscar race — via Slack, of course. This week, we look at the open Best Supporting Actor race.

Christopher Rosen: Hello, Joyce! In this space last week, we tossed around the Best Supporting Actress race — a conversation that is already moot with the news that Caitriona Balfe is going into the supporting race for “Belfast.” We discussed that already *this* week, and both think she very well could win the whole damn thing come spring of next year — a sign of potential great news for “Outlander” stans. So let’s instead hit what could either be the year’s most chaotic race or a pedestrian category that we have to slog through for another five months: Best Supporting Actor. After weeks of status quo, where unseen contenders like Richard Jenkins and Jared Leto really dominated the conversation, it feels like we’ve kind of hit a stride: Kodi Smit-McPhee continues to climb the ranks for his coiled performance in “The Power of the Dog,” Jamie Dornan has entered the chat thanks to his accurate category placement for “Belfast,” and perhaps most importantly for us, Ben Affleck has two potential paths to his first acting Oscar nomination. We share a mutual admiration for the two-time Oscar winner, and even got to see him onscreen this week in “The Tender Bar.” Despite its total lack of fidelity to the Long Island experience — “The Tender Bar” is set in a town near where we both grew up, but shot near Boston and looks exactly like it shot near Boston; where were the diners? — I was won over by Affleck. Director George Clooney has said Affleck doesn’t get roles like the good-natured Uncle Charlie in “The Tender Bar,” and he’s pretty much right. Affleck is often cast as the bully, cad or action hero, depending on the era of his fame. Charlie is just the kind of guy you want to hang out with. It’s an effortless performance from Affleck. If I had to compare it to anyone in recent years, it would be Brad Pitt in “Once Upon a Time In Hollywood.” Just a movie star doing movie star stuff — although without the baggage Pitt’s violent character brought to the table. All of which is to say, Joyce, that I’ve now got Affleck winning. Why not? Have I gone around the Dunkin’ on this? And more important, do you think I’ve got the wrong Affleck performance on top?

joyceeng: As someone who lives a block away from a Dunkin’ and frequents it as often as our guy does and who has watched his brother’s iconic “SNL” sketch more times than I can count, I can only support your pick. We will both see “The Last Duel” this weekend, so we’ll have a better overview next week. He can only get nominated for one at the Oscars, and “The Last Duel” is the bigger film with a higher nomination ceiling, so I can see that being the ticket. If he were to get in for “The Tender Bar,” he’d almost certainly be a lone nominee. Despite its deficient Long Island verisimilitude, I enjoyed “The Tender Bar” and Affleck’s easygoing, charming turn as well. It’s a nice, gentle Dad Movie, but it’s also probably too minor for the Oscars beyond Affleck. As I said earlier this week, I can see his dual performances joining forces to earn him a “body of work” nom but ostensibly for one film. “Gone Girl” notwithstanding, I’ve always felt that Affleck does his best work as a supporting player when he’s not bogged down by the baggage of being a Leading Man or Movie Star, mantles that I feel he’s never been comfortable with. So it’s fitting that he might get his first acting nomination for a supporting performance. And what helps him is that the category right now, like you’ve said, is all over the place with no real frontrunner (Jenkins is in first but that feels like a hopediction), so it’s the perfect opportunity for Big Ben to make another Oscar comeback. How you like ‘em apples?

SEE Oscar Experts Typing: Ann Dowd has ‘Mass’ support, but can she hold off the competition?

Christopher Rosen: Ben winning an Oscar years after being the bomb in “Phantoms” — you’d love to see it, I’d love to see it. But in the interest of context, let’s table the rest of our Affleck discussion until after we see “The Last Duel.” How about the other contenders? You mentioned Richard Jenkins, and he’s up there for “The Humans,” a role that previously won Reed Birney a Tony Award — and Birney is in contention too for “Mass,” although he’s got to compete with Jason Isaacs in the same movie, much like Ann Dowd and Martha Plimpton in the supporting actress race. Leto has what appears to be a showy, scenery-chomping part in “House of Gucci” (that wig!). Smit-McPhee, Jesse Plemons, Bradley Cooper and Jon Bernthal are all there too. But I keep going back to Dornan as a possible winner here as well. He’s so darn charming in “Belfast” and while we’ve really focused on Balfe, I think there’s a world where he can win. Am I just on a wing and an “Edgar’s Prayer”?

joyceeng: It would really depend on how strong “Belfast” is and how strong/weak this category ends up being. Assuming Balfe is winning, “Belfast” would be the first film since “The Fighter” to sweep the supporting categories. Christian Bale and Melissa Leo dominated that season (except at BAFTA), but I can picture supporting actor being split and utterly chaotic this season. The last time this category as a whole, not just in terms of a frontrunner, was this in flux at this point was six years ago when we were confused about the “Spotlight” dudes’ placements and then Sylvester Stallone suddenly came in for what looked like a TKO but then was snubbed by SAG and BAFTA. And Mark Rylance, who was the only one nominated everywhere in supporting, won. I currently have Smit-McPhee in a precarious first. I can see him being the critics’ favorite and “The Power of the Dog” is a top Best Picture contender, but at the same time, he’s young (25) and we know how they feel about young men. However, they have nominated younger guys in recent years and Daniel Kaluuya just became the seventh youngest supporting actor winner at 32 — a year after that category did not feature a nominee younger than 56. Will KSM prove that age ain’t nothing but a number?

Christopher Rosen: In his favor: the academy is getting younger and presumably cooler, and he really does manage to almost steal the movie from Benedict Cumberbatch, Kirsten Dunst and Jesse Plemons. But against: it’s not a slam dunk go-for-broke performance of the vintage that usually does well here. That’s why I keep leaning to Dornan or Affleck: Dornan goes for it in “Belfast,” including a showstopping musical performance, while Affleck is the biggest star here. I truly hope he competes to the end, if only so I can shout “retainer!” at unsuspecting awards watchers for the foreseeable future.

joyceeng: Honestly, between “Retainer!” and “best part of my day,” how did he not get nominated? (Sidenote: Next year he’s gonna wake up and be 50, so I feel ancient right now.) I am very much looking forward to seeing how this race shakes out since things are so up in the air, but I also hope Ben can go the distance and “Huzzah!” his way into the (Dolby) theater and claim his rightful part Oscar.