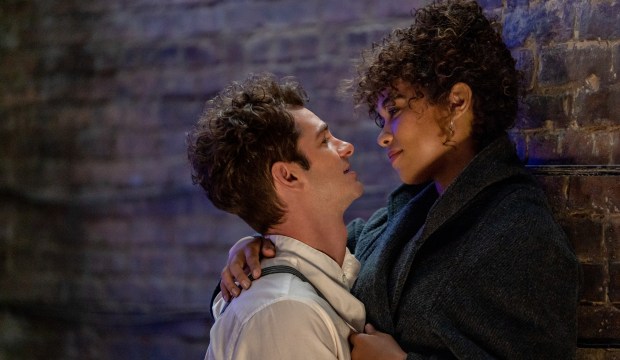 Welcome to Oscar Experts Typing, a weekly column in which Gold Derby editors and Experts Joyce Eng and Christopher Rosen discuss the Oscar race — via Slack, of course. This week, we debate whether “Tick, Tick… Boom!’s” Andrew Garfield will crash the Best Actor category.

Christopher Rosen: Hello, Joyce! I’m feeling the bohemian lifestyle as it were on this Friday, so what better time than now to circle back to Best Actor. We’ve kind of tabled this category, what with Will Smith seemingly so comfortably ahead for “King Richard.” (He remains the favorite according to our odds). But I’ve seen at least two performances this week alone that could maybe make a strong case to contend here — specifically Andrew Garfield in “Tick, Tick… Boom!” The directorial debut from Lin-Manuel Miranda is out in select theaters now before hitting Netflix next week (the same day Smith’s crowd-pleaser also debuts in theaters and at home on HBO Max) and it’s not only a really assured and enthusiastic first film for the “Hamilton” mastermind but also perhaps the perfect platform for Garfield. The past nominee is a performer who, when needed, can just explode with passion — and playing “Rent” creator Jonathan Larson is all about passion. Garfield sings, he’s allowed to be charming and romantic and difficult and obstinate. It’s a performance that just kind expands the notion of what Garfield can do — the kind of thing it will be easy for a great many to fall in love with once they see the movie. I had Garfield in my predictions for Best Actor for weeks until recently. What was I thinking bumping him out? No clue. Now that I’ve seen the movie, I think he has maybe the best shot out of anyone else besides Smith to get a nomination. Which speaks to the flexibility of this category. We’ve had Smith, Benedict Cumberbatch, and Denzel Washington lined up since September — but are any of those guys actually vulnerable long term, especially with so many potential nominees looming before year-end?

joyceeng: Are “Tick, Tick… Boom!” stans called Boomers? Are you a Boomer now? I am unable to watch this feature film until next week, but your excitement over it and Garfield’s performance was palpable through your post-screening texts. I think Smith, Cumberbatch and Washington are probably all fine for the nomination — Smith and Cumberbatch are in big Best Picture players, and while “The Tragedy of Macbeth” may not be as strong for a variety of reasons, Denzel is Denzel. And as we’ve talked about before, this man made it in last time for a movie approximately 11 people watched, “Roman J. Israel, Esq.” So can Garfield take one of those other spots? Sure! But I’ll hedge my bets until I see it. I’ll reiterate what I texted you, which is that he is someone who would’ve benefited greatly from the Golden Globes in normal times. The other thing is that while Garfield is generating these stellar reactions, it doesn’t feel like many are immediately slotting the film into their Best Picture lineups. Best Picture and Best Actor are heavily linked, because, you know, men. It’s not impossible to get nominated in Best Actor without a Best Picture nomination for your film — the nom is more important when it comes to winning Best Actor — so Garfield can definitely make the cut, but if “Tick, Tick… Boom!” isn’t a Best Picture contender, I would hesitate to call him top two. I currently have Peter Dinklage of another musical, “Cyrano,” and Leonardo DiCaprio of the unseen and sure-to-be-chaotic “Don’t Look Up” in. But we’ve got Bradley Cooper in the mix for “Nightmare Alley,” a double dose of Adam Driver for “The Last Duel” and “House of Gucci” — we definitely did not talk enough about Driver in our “Gucci” gabfest this week — and others like Joaquin Phoenix, Simon Rex and Clifton Collins, Jr. Who else would you fill out your slate with if Garfield’s in?

SEE Oscar Experts Typing: Is Kristen Stewart about to face a ‘Nightmare’ scenario in Best Actress?

Christopher Rosen: I’ve thought a lot about this actually (not the boomer things, I’m Gen X, forever!). With the top three here established plus an ascendant, for me, Garfield, that leaves just one final spot. I’ve had Dinklage there since Telluride. I love that movie, I love his performance in that movie, and it feels like the right time for him to score his first nomination. But “Cyrano” doesn’t come out until December 31 before its wide release in January. Maybe that’s great since this season is so lengthy and it’s better to arrive late. Like Denzel, Dinklage won’t wear out his welcome and we saw the beginnings of his campaign at Telluride. It’s a compelling narrative: a multiple Emmy Award winner and beloved character actor getting his first meaty leading role in a feature film. So, Dinklage? Unless “Cyrano” is a little like “The Eyes of Tammy Faye” in that it’s a square peg in this season and proves divisive as a film (even if everyone agrees on its star). That leads me to circle back to someone else from the field. I loved Driver in “The Last Duel,” but that’s a textbook supporting part to me. He’s also great in “House of Gucci,” but that’s a straight-man role and I think the film’s broader actors will have more supporters this season. Dare I say, maybe you’re right about DiCaprio. He just feels like an absolute wild-card, a dark horse. Make your case for Leo and while you’re there, what do you make of Bradley Cooper? We haven’t seen that one yet, but I wonder if the best thing “Nightmare Alley” can do for Coops is help buttress his supporting actor campaign for “Licorice Pizza,” where he’s got precious little screen time but makes a huge impact.

joyceeng: My current case for Leo is that he’s Leo fronting a wild Adam McKay pic, and though McKay’s films are divisive every which way to the public and critics, the academy has embraced them and his actors. I don’t know about you, but I vastly prefer Leo in comedic roles and I need him to do more of them. I’m not going to go so far to say he’ll win, especially since we haven’t seen “Don’t Look Up” yet, but this would be on the level of a “Once Upon a Time in Hollywood” bid for him: safely nominated but not a real threat for the win. If you recall, there was discussion of Leo possibly getting snubbed for “OUATIH,” but I never bought that. That film was successful, a top three Best Picture contender with a locked acting win for another Movie Star Who Excels at Comedy, and Leo himself carries tremendous status. So provided that “Don’t Look Up” doesn’t bomb, I think he can make it. I don’t know what to do with your boy Bradley at the moment. He could get into both categories but also easily could miss both. (He is a producer on “Nightmare Alley” so he could get a ninth nom in Best Picture.) I’ll have a slice of “Licorice Pizza” next week, but you, like most, were into BCoops’ glorified cameo and the acting debut of Cooper Hoffman. I don’t think Hoffman will follow in his late father’s footsteps for now — he’s too young for them at 18 — but make your case for him. And I guess we’d be remiss to not mention another newcomer, Jude Hill, who is a zygote at 11 years old but leads Best Picture favorite “Belfast.”

SEE Oscar Experts slugfest: A house of Oscars for ‘House of Gucci’ and Lady Gaga?

Christopher Rosen: Here’s my Cooper Hoffman take: I realize this is hyperbole and all, but I honestly haven’t been more enamored by an actor’s performance since Adam Sandler in “Uncut Gems.” It’s truly the best performance I’ve seen from anyone this year — and when you catch flashes of Philip Seymour Hoffman‘s mischievous charm in Hoffman’s mannerisms, it helps “Licorice Pizza” really capitalize on its broad feelings of emotional nostalgia. He’s the other actor I mentioned above before going into Garfield. But all that said, it would be a real shock to see Hoffman nominated. He’s a long shot, but I can’t count out a performance that is this good. As for Little Buddy himself, Jude Hill, well, it’s a charming performance and I know Kenneth Branagh and his cast and production team did a lot of work helping craft Hill’s work. But I just can’t imagine him getting in over anyone we’ve mentioned so far, even with “Belfast” being such a strong contender. He’s in the mix, but I won’t put him in there just yet. So I’ll leave you with the last word, but here’s my last word on Leo: his best performances are in “The Wolf of Wall Street” and “Once Upon a Time in Hollywood,” and both are broadly comic and each got him a nomination. If “Don’t Look Up” is as good as those classics, well, maybe Will and Denzel will have some A-list company.

joyceeng: That’s what I’m saying! Put this man in a flat-out comedy, plz! Imagine if he were something like “The Nice Guys” (severely underrated). Anyway, yes, if “Don’t Look Up” lands like the comet that’s about to destroy Earth in the movie, we’ll have a jam-packed field of ’90s movie stars, and I love the ’90s (™ VH1). But even if “Don’t Look Up” doesn’t hit, Leo will surely deliver some new memes like the meme king (of the world) that he is.