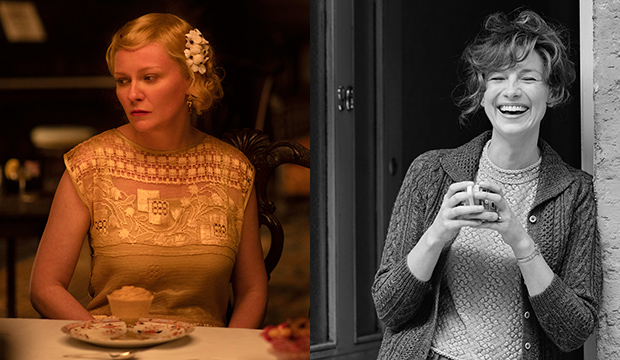 Welcome to Oscar Experts Typing, a weekly column in which Gold Derby editors and Experts Joyce Eng and Christopher Rosen discuss the Oscar race — via Slack, of course. This week, we reassess Best Supporting Actress after a reshuffle at the top of the odds.

Christopher Rosen: Hello, Joyce! Allow me to stop watching the new “House of Gucci” trailer on repeat to begin our weekly conversation with some news from the front of the Best Supporting Actress race. There’s a new leader of the cheerocracy: Kirsten Dunst has edged in front of Ann Dowd among Gold Derby Experts and users overall in the Best Supporting Actress race. Truthfully, I can’t say I’m too surprised. As you were quick to point out when we talked about this race a few weeks ago, Dowd is arguably not even the strongest potential nominee in her own movie thanks to the presence of Martha Plimpton — something that says more about the strength of the “Mass” ensemble than anything else. Plus, Dowd would shape up as the lone nominee from “Mass,” whereas Dunst is a key factor in one of the year’s best Best Picture candidates. All those factors — and presumably some Toros in the atmosphere as well — have Dunst set as an early-season frontrunner. And yet! I’m still not convinced she’ll go the distance, not with Aunjanue Ellis and Caitriona Balfe, two serious threats from crowd-pleasing Best Picture hopefuls, looming in the background. But what do you think, Joyce? Is this Dunst’s time to shine, or will she wind up fading in the end like fellow former teen movie star Amanda Seyfried did earlier this year for “Mank”?

joyceeng: Second place? Hell yeah! First place? F— yeah! Generally speaking, I’m happy to see a shake-up here because it’s boring, especially at this stage, when there’s no movement. And, yes, I did clock Plimpton coming for her own kudos earlier this month, which is why I’m also not surprised to see Dowd relinquish the stranglehold she’s had on the top spot since July. And like I said last time, “Mass,” while great, is still a tiny film and I don’t think it’s strong enough to snag double noms. This is a long way of saying I think the change up top has more to do with “Mass” being out now (and going wide this weekend) and less to do with anything related to “The Power of the Dog,” which is still three weeks away from release. The buzz around the Jane Campion film has not changed nor has the buzz for Dunst’s performance. She’s gotten great reviews, but at the same time, it feels like the notices for her co-stars Benedict Cumberbatch and Kodi Smit-McPhee are stronger. Is she a default top, um, dog? Maybe? I do think she’s good for the nomination, which, as we’ve touched on last time, is long overdue. The only other people I can say that about are Ellis and Balfe, who has broken into the top five — currently in fifth place — since she was confirmed to be in supporting two weeks ago. I think I speak for both of us when I say she’ll continue to rise as people update their predictions. You’ve always been high on her chances in supporting. Is Balfe really going to bring it?

SEE Oscar Experts slugfest: Will ‘Dune’ spice up the acting races? And what to make of ‘Eternals’?

Christopher Rosen: Let’s talk about Balfe. I’ve got her at the top and it’s hard to envision a scenario where she gets bumped out. It just seems too perfect: a big performance in a huge Best Picture frontrunner that has won over audiences at every festival at which it has screened this season. But our odds don’t necessarily agree. She *has* risen since it was confirmed she’ll appear in the category, of course, but perhaps owing to her intense “Outlander” fan base, I figured she’d be in a better spot right now. That Dunst was the person to unseat Dowd and not Balfe is at least curious. Not that it won’t change again: “Belfast” comes out in a couple of weeks, and I’m sure Balfe will get a renewed push (I already expect Balfe to land at least one or two magazine covers before the end of the year). But let’s just say I’m surprised she’s not doing better. I’ll give you two other performances, that to me, deserve more discussion: Rebecca Ferguson in “Dune” and Regina King in “The Harder They Fall.” I’ve discussed Ferguson with you already — I think of the “Dune” cast members, she maybe has the easiest route to landing among the nominees. But assuming “Dune” doesn’t break through among the actors, maybe King is the long shot worth promoting: she played Treacherous Trudy Smith in the Netflix Western and is an absolute scene-stealer as one of the film’s key villains. King, a former winner here for “If Beale Street Could Talk,” gets to be sinister, cool, tragic and awfully physical in her performance, and it’s the kind of scenery-chewing fun that should be tailor-made for supporting recognition. I’ve seen exactly zero (0) people talk about her seriously as a nominee — so allow me to start that off as “The Harder They Fall” hits Netflix next week. Is there any reason King shouldn’t get nominated? Have I talked myself into going out on a limb and putting her in my top five?

joyceeng: I definitely think if Balfe had been in supporting all along — aka Focus settled on her and Jamie Dornan’s placements from the jump — she’d be at least second, if not first, right now. But maybe it’s a good thing she’s not. She doesn’t have to carry the baggage of being the odds-on favorite on paper at the moment. We’re still four months away from nominations. Similarly, it might be good for “The Harder They Fall” that there hasn’t been a ton of awards chatter around it outside of Jay-Z’s song contender. It’s felt like people have viewed this film as more of a fun, commercial play. So when it and performances exceed expectations, so to speak, it’s more “surprising” and you wanna root for it more because no one is talking about it. Emmy voters love King, but do Oscar voters? This category has a lot of people in the mix, but if you believe the top three, in whatever order, is Dunst, Ellis and Balfe, then there are two open-ish slots. I don’t have King in, but I’m also not going to say she can’t get in. One of those slots could go to Balfe’s co-star, Judi Dench, who’s now in sixth place, if “Belfast” goes over big. Netflix also has other hopefuls in Ruth Negga for “Passing” and the “Lost Daughter” duo of Jessie Buckley and Dakota Johnson. And there’s a handful of ladies waiting in the wings, like “Nightmare Alley’s” Rooney Mara and Toni Collette, Ariana DeBose from “West Side Story, and some upstart named Meryl Streep from yet another Netflix movie with a totally not loaded cast, “Don’t Look Up.” What do you make of these unseen contenders? Will we look up one day and they will have taken over the race?

SEE Oscar Experts Typing: Will ‘King Richard’ serve up a Best Actor win for Will Smith?

Christopher Rosen: I think anyone counting out Meryl Streep here would be a little foolish. She’s Meryl, she’s playing a Trumpian president, and she’s been nominated for much less — it is very easy to imagine waking up in four months with her standing once again among the nominees. But perhaps just because of my devotion to Steven Spielberg, the source material, and Rita Moreno, I keep coming back to Ariana DeBose. She plays Anita in “West Side Story” and if that movie is as big as we maybe expected pre-pandemic, how does she not warrant a serious look here? Life can be bright in America, and all that?

joyceeng: Based on absolutely nothing, DeBose might be its best shot an acting nomination. The “West Side Story” team has kept things close to the vest outside of those trailers and this 60-second sneak peek that dropped this week. I guess you can say since she’s playing Anita, Moreno’s Oscar-winning role and Moreno is also in the film (and is an executive producer), people might be quicker to compare the two, though I have no doubt DeBose will put her own spin on the character. But for the time being, Kiki’s the poo, so take a big whiff.