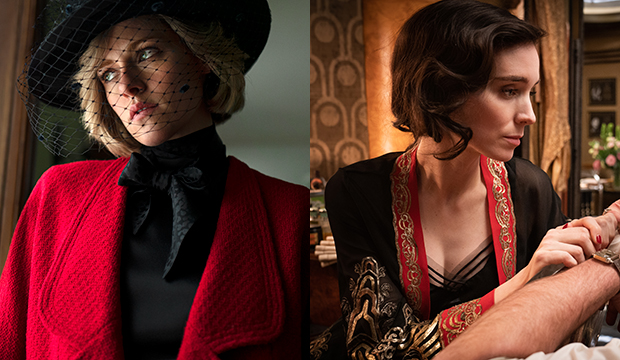 Welcome to Oscar Experts Typing, a weekly column in which Gold Derby editors and Experts Joyce Eng and Christopher Rosen discuss the Oscar race — via Slack, of course. This week, on “Spencer’s” opening weekend, we take another look at Best Actress now that it has a new contender.

Christopher Rosen: Hello, Joyce! If it’s a day of the week that ends in the letter “y,” it must be time for us to talk about Best Actress. We devoted our slugfest to the category this week and that was before two big things happened: Rooney Mara was confirmed in the lead actress category for “Nightmare Alley,” pushing her co-star Cate Blanchett to supporting, and I got to see “House of Gucci.” We can’t really talk about that latter one just set — social media sentiments are embargoed until next week, *Italian AOC meme* — so let’s focus on “Nightmare Alley” to start. We kind of talked about this before starting this conversation in an official capacity, but I can’t say I’m super surprised by this outcome. Anyone who has seen the original adaptation of “Nightmare Alley” or read the book on which it’s based probably expected Blanchett to eventually cycle into the supporting category — her role takes a greater significance in the second half. Sight unseen — quite literally, I don’t know one person who has gotten to check this out just yet — the decision feels like a boon for Blanchett’s chances. We’ve talked about Best Supporting Actress a bunch, and even in a packed category, it feels like there could be room for a former winner to make the final cut. But what about Mara? I can’t say I was expecting her to land a nomination in supporting actress, so without seeing the movie, I don’t think I’d move her into my five for lead. What about you?

joyceeng: Look at this reverse “Carol”! I, too, am not surprised by their designations. Like you said, those familiar with the source material and the first adaptation have long warned of the nature of Blanchett’s juicy but limited role, but I think many expected her to be in lead because she’s Cate Blanchett. I think she can take one of those two ostensibly open slots in supporting that we’ve talked about for her eighth nomination — C8 the Gr8 is coming! As for Mara, this might at best be a lateral move. Obviously sight unseen, but I don’t think it’s out of turn to say Bradley Cooper is the One True Lead of this movie while Mara is a de facto female lead, and her placement is also a way of maximizing nomination potential (Toni Collette and Mary Steenburgen are also in supporting). So that’s a long way of saying, no, I do not have her in right now. But as we’ve talked about this week, Best Actress feels like Kristen Stewart vs. the field, and there are so many combinations for the other four slots that make sense. I know you don’t have KStew in first, but with “Spencer” out this weekend, do you foresee an ascension in your rankings?

SEE Oscar Experts slugfest: Will this really be the year of Kristen Stewart?

Christopher Rosen: I’ve been giving this a lot of thought since we last spoke and I do very much foresee a coronation as it were for KStew in my own personal rankings (™). At this point in the season, it doesn’t even feel contrary to pick another frontrunner in Best Actress — it just seems incorrect and almost irrelevant. Stewart has so many narratives going at once: the strength of her performance, a transformational role as a real-life figure, a narrative that works for Film Twitter, Stan Twitter, and probably even the Hollywood Establishment. Best Actress is also a place that seemingly values younger stars — and Stewart is somehow only still 31 despite acting for literal decades. So, yes, when I update my picks next week, Stewart will officially ascend above Jessica Chastain. The rest of my list will likely include Olivia Colman, Lady Gaga and Penelope Cruz. But how about you, where do you see this race moving?

joyceeng: Yeah, at this point, I won’t go as far to say Stewart is a stone-cold lock for the win like, say, Blanchett was for “Blue Jasmine” — just an undeniable, unstoppable sweeper that you knew the second you saw it — but she is the safest for a nomination while the other contenders could miss for one reason or another. Stewart is at the “right” age for a Best Actress victory, but as we’ve discussed before, the category has refreshingly trended older the past four years and she would also be the first thirtysomething to win Best Actress since another Kate who’s also waiting to become K8: Kate Winslet. In addition to everything you listed above, she’s been campaigning and has been spectacularly candid on a wide array of topics like she’s never been before. You love to see it. I still have her in first, along with Colman, Cruz, Gaga and Frances McDormand. As you witnessed (live!), I re-added Gaga on Wednesday, but more on that next week. But to bring this back to our “Nightmare” switcheroo, what if McDormand drops down to supporting for “The Tragedy of Macbeth”? She, herself, has described her Lady Macbeth as a “small supporting role” in this adaptation, but that could just be Fran parlance to which we’re not privy. If that were to happen, it opens up another slot in lead and makes supporting even more crowded with Oscar-winning legends.

Christopher Rosen: For the sheer chaos of what would happen, I do want to see McDormand in supporting, if for no other reason than because it would instantly become the most crowded race: We’ve already got Caitriona Balfe, Ann Dowd, Kirsten Dunst, Aunjanue Ellis, Judi Dench and Ruth Negga in serious contention, and then there’s the possibility McDormand, Blanchett, possibly Meryl Streep, and maybe even a newcomer like Ariana DeBose could all push into the conversation too. Which to bring it back to Best Actress is another reason why Stewart feels so settled: Even with a lineup of deserving candidates, she’s got less competition to rise above. Joyce, I would make a “Twilight” reference here, but I’m more of a “Hunger Games” fan myself. Any last words before we depart?

joyceeng: Is this your way of saying JLaw will volunteer as tribute to be KStew’s biggest challenger? Imagine if Blanchett, Dench and Streep make it — we’ll get a rematch of their Best Actress bout eight years ago that, again, wasn’t much of one since we all knew Blanchett was winning. But, yeah, Stewart can chillax for the time being. Plus, she got Guy Fieri to officiate her wedding, so she’s already won.