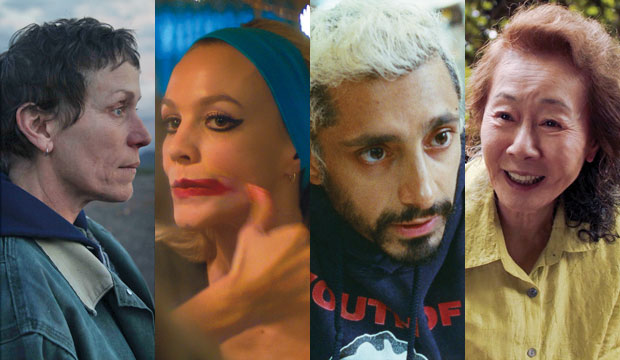 The weekend of April 10 and April 11 included a number of industry awards that could be major indicators for the Oscars on April 25, especially the Directors Guild Awards and the BAFTA Awards. So who’s up and down in the Best Picture contest? Here’s how I think the momentum has shifted thanks to the BAFTAs’ impact:

“The Father” — Not only did it win Best Adapted Screenplay at the BAFTAs over Oscar front-runner “Nomadland,” Anthony Hopkins also won Best Actor over Oscar favorite Chadwick Boseman (“Ma Rainey’s Black Bottom”). Those results could partly be chalked up to “The Father” being a British film competing against American rivals (that never hurts at the BAFTAs), but they’re still an important indication of industry admiration for the film as a whole.

“Nomadland” — Chloe Zhao won Best Director at the DGA Awards, and then the film swept the top categories at the BAFTAs: Best Picture, Best Director, and Best Actress (Frances McDormand). Though it’s not unambiguously good news. The last six BAFTA winners for Best Picture all lost the Oscar. We’ll find out in a couple of weeks if that’s just coincidence or a very real BAFTA jinx that will kneecap another front-runner.

“Promising Young Woman” — It didn’t win Best Picture at the BAFTAs or Best Director at the DGA Awards, but its BAFTA victories for Best British Film and Best Original Screenplay were great news. Its writing victory wasn’t surprising after it claimed Critics Choice and Writers Guild Awards, but beating “The Father,” “The Mauritanian,” and “Rocks” for British Film suggests it was probably in second place behind “Nomadland” in the BAFTAs Best Picture voting. Might it also be the strongest challenger to “Nomadland” at the Oscars?

“Sound of Metal” — It won a couple of BAFTAs — Best Sound and Best Film Editing — and it’s looking good for Oscars in those same two categories. But it also won Best First-Time Director at the DGA Awards for Darius Marder over Florian Zeller (“The Father”) and Regina King (“One Night in Miami”), which was an important win over some tough competition. On a preferential ballot at the Oscars, an almost universally well-liked movie like this has the potential to shock us.

“Minari” — Yuh-Jung Youn did win at the BAFTAs, strengthening her position in the Best Supporting Actress Oscar race, but the film’s loss to “Another Round” for Best Foreign Film was significant. “Minari” was the only Oscar nominee for Best Picture in that BAFTA category, so it was the big fish in a small pond there. Might Youn therefore be the film’s only Oscar win?

“The Trial of the Chicago 7” — It won the SAG Award for its ensemble cast and the Golden Globe for its screenplay, but that’s about it this season. It was shut out at the BAFTAs, losing in the two categories where it had its best chances: Best Original Screenplay (to “Promising Young Woman”) and Best Film Editing (to “Sound of Metal”). It’s very possible the film leaves the Oscars empty-handed.

“Judas and the Black Messiah” — It didn’t have many opportunities at the BAFTAs, but it did win Best Supporting Actor for Daniel Kaluuya, making him probably the safest of any of the acting front-runners at the Oscars after his sweep of Golden Globe, Critics Choice and SAG Awards.

“Mank” — It feels like the ship has sailed on this biopic’s Oscar hopes in top categories. But the one award it keeps consistently winning, Best Production Design, it won again at the BAFTAs. Out of its 10 Oscar noms, that may be where its greatest hope lies.