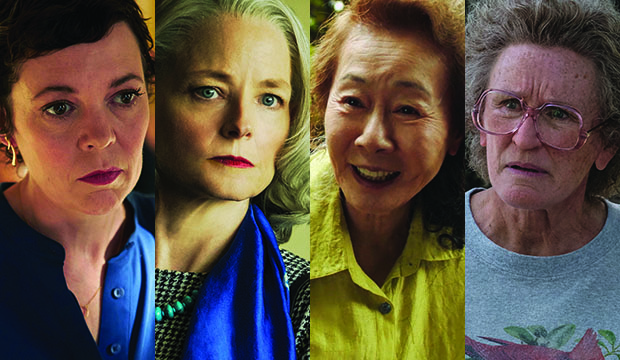 Best Supporting Actress was already one of the most unsettled Oscar races of the year, and just when we thought the Golden Globes might cement a frontrunner on Sunday night, well, the Globes are gonna Globes. Like Marie Kondo, the Hollywood Foreign Press Association loves mess and gave its supporting actress honor not to odds-on favorite Amanda Seyfried (“Mank”) or three-time Globe champ Olivia Colman (“The Father”) or overdue-at-the-Oscars sentimental favorite Glenn Close (“Hillbilly Elegy”), but to another legend, Jodie Foster (“The Mauritanian”), who was fourth in the odds and was as taken aback by her win as we all were.

Foster’s victory adds a whole new complexion to the chaotic proceedings. While the two-time Oscar winner was longlisted at BAFTA, she was snubbed at Critics Choice and the Screen Actors Guild Awards, meaning we could get four different winners at the televised precursors. Shades of the 2000 and 2007 supporting actress races. And honestly, after two 20/20 acting sweeps in three years, this is what we deserve.

But before we even get to an Oscar win, there are nominations first, and if you already had trouble negotiating almost 10 actresses into five spots, things just got a bit more complicated. Here’s where it feels like things stand post-Globes and pre-Critics Choice.

Maria Bakalova (“Borat Subsequent Moviefilm”)
Well, the Globes really delivered in all three actress races this year. Perhaps the only thing more shocking than Foster’s win and Andra Day‘s upset in drama actress for “The United States vs. Billie Holiday” is Bakalova’s loss in comedy/musical actress. The Globes was the only place where Bakalova, in fifth in our Oscar odds, was placed in lead, and given the weak field and her breakout turn in “Borat,” she was the overwhelming favorite to win, but she lost to Rosamund Pike (“I Care a Lot”), who was on her third nomination and is in a current buzzy Netflix hit. Bakalova, who’s been splitting the critics’ awards with Youn Yuh-jung (“Minari”), really needed this win to fortify her Oscar nomination chances since her film is far from typical academy fare. Now she looks very much in danger of getting snubbed.

Ellen Burstyn (“Pieces of a Woman”)
After early buzz and the narrative of being the oldest acting nominee at 88, Burstyn sputtered when it came to the major precursors. The Oscar champ made Critics Choice in a field of six and the BAFTA longlist, but she wasn’t nominated at the Globes or SAGs while her onscreen daughter Vanessa Kirby was. Now with Foster surging and “Pieces of a Woman” not being a player outside of acting, her chances look very bleak, but if there is no consensus around anyone, don’t count out a legend like her somehow sneaking in.

Glenn Close (“Hillbilly Elegy”)
You know, you gotta hand it to Close for always giving us the most exciting and stress-inducing races. Two years ago, the Globes kickstarted her Oscar campaign for “The Wife” that ultimately fell short to Colman’s turn in “The Favourite,” so maybe the HFPA didn’t want to give her another one so soon. Who knows how they work in the back of that French McDonald’s? Anyway, a Globe triumph would’ve obviously been huge for Close, who’s fourth in the odds, and probably would’ve set her up for a sweep. But this loss is not fatal. She did not lose to presumed frontrunners Seyfried or Colman, which would’ve bolstered their campaigns. The hardest thing for the seven-time nominee has always been to get the Oscar nomination, and it just got a wee bit more difficult with Foster staking her ground, but as aforementioned, Foster, unlike Close, is not nominated at Critics Choice or SAG. SAG is the path for Close, who is no guarantee for a BAFTA bid with the jury vote in play. With how the calendar has shaken out — Oscar nominations are March 15; the SAG Awards are April 4; Oscar voting starts April 15 — if Close is nominated at the Oscars and then wins SAG, she can be on her way.

SEE Will the Golden Globes predict the Oscars?

Olivia Colman (“The Father”)
The former Best Actress champ is probably the one person everyone will agree is the safest bet for a nomination — she’s currently in first in the odds — but she probably won’t win; it’ll be one of those post-win nominations. While Colman’s great in “The Father,” there’s not really any momentum behind her to give her a bookend statuette — Close has won more critics’ awards than she has — but if things continue to be splintered, she could pick up a win at BAFTA. But for nomination purposes, if you don’t have Colman, you’re doing it wrong.

Dominique Fishback (“Judas and the Black Messiah”)
Fishback is on the BAFTA longlist, but she has missed everything else. Not ideal, obviously, but “Judas” is a late arrival and Oscar voters have some time to catch up on it, especially now that Daniel Kaluuya has won the supporting actor Globe and is poised to sweep the rest of the way. If voters become “Judas” devotees, Fishback could easily be a classic coattail nominee with no precursor nominations a la Laura Dern in “Wild” (2014) and Marina de Tavira in “Roma” (2018).

Jodie Foster (“The Mauritanian”)
As of this writing, Foster is still in eighth place in the odds, but expect her to move up posthaste. “The Mauritanian” is a late-breaking movie, but her Globe victory and charming speech — complete with an adorable dog and matching pajama chic fashion with her wife Alexandra Hedison — will likely make it a priority screener for folks now. She’s AWOL at Critics Choice and SAG, so the next time we could see her is at BAFTA, which has longlisted “The Mauritanian” 11 times. While Foster’s Globe win was a surprise, no Globe supporting actress champ has been Oscar-snubbed since Katharine Ross for “Voyage of the Damned” 44 years ago. Sure, Aaron Taylor-Johnson (“Nocturnal Animals”) got snubbed four years ago if you include the men — the first time that’s happened since Richard Benjamin for 1975’s “The Sunshine Boys” — however, no offense to Taylor-Johnson, but Jodie Foster is not Aaron Taylor-Johnson.

Amanda Seyfried (“Mank”)
Seyfried rose to first place in the odds after “Hillbilly Elegy” got savaged by critics, and on paper, the actress has the makings of a typical supporting actress champ, but she’s always felt like a weak frontrunner. Not only has “Mank” underwhelmed, but she was snubbed at SAG while Gary Oldman got in. She was favored to win the Globe and well, whoops. Seyfried, who’s in third in the odds, is not in as precarious a situation as Bakalova because “Mank” is a stronger film and will be a below-the-line monster, but now it feels like it’s a case of whether “Mank” can carry her into the top five.

Yuh-Jung Youn (“Minari”)
The person who benefited the most from the Globes is arguably Youn, who also didn’t have to sit around on a Zoom call for hours since the HFPA overlooked her. The Korean icon, who’s second in the odds, has been the critics’ favorite and she received a SAG nomination — a big get since SAG has not nominated non-English language performances in individual categories since the merger with AFTRA in 2012. “Minari,” which got three SAG bids, has also just been released and is peaking at the perfect time. With Bakalova and Seyfried taking hits, Youn could pick up Critics Choice this coming weekend and then SAG, and then BAFTA could follow suit. Her biggest hurdle is the Oscars’ terrible history when it comes to just nominating Asian actors, but the SAG bid is the much-needed feather in her cap.

Helena Zengel (“News of the World”)
The low-key contender virtually no one is talking about is Zengel, who is seventh in the odds. So far the 12-year-old is only missing a Critics Choice bid in supporting — she was nominated for young actor/actress — but the bigger deal is that she got the Globe nomination to go along with her SAG one. SAG has always been kid-friendly, so that one wasn’t surprising, but the Globes are less so — the last child actor to be nominated in supporting was Saoirse Ronan for “Atonement” 13 years ago. The Oscars are also kinder to child actors, especially actresses, so she’s in a good position. Plus, she’s got the Tom Hanks Bump in her corner.