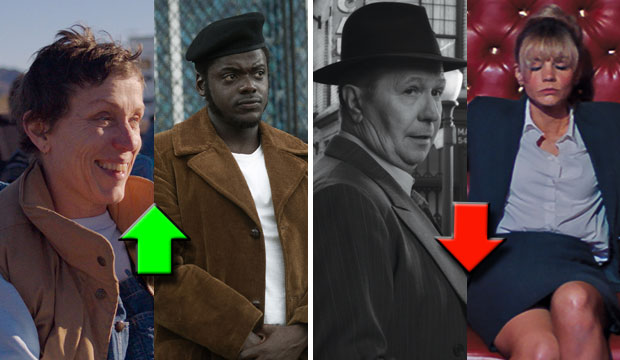 The Golden Globes were handed out on Sunday night, February 28, and the film awards were full of surprises. The Hollywood Foreign Press Association only has 87 members, and they have no voter overlap with industry groups like the Oscars or BAFTAs, but their high profile, early date, and big broadcast television platform give them a disproportionate amount of influence on the awards season. So how did these awards affect the momentum of some of the season’s biggest contenders?

Movies that opened in February — Opening late can be a double-edged sword. If voters saw your film recently they’re more likely to think of you when marking their ballots. But there’s also the risk that you’ll be too late to generate significant awards momentum. Not so at the lobes. Surprise acting winners “The United States vs. Billie Holiday” (Best Drama Actress for Andra Day), “I Care a Lot” (Best Comedy/Musical Actress for Rosamund Pike) and “The Mauritanian” (Best Supporting Actress for Jodie Foster) all premiered in February. “Judas and the Black Messiah” (Best Supporting Actor winner for Daniel Kaluuya) dropped in February too. Speaking of which …

“Nomadland” — This film had virtual screenings in December, but it didn’t hit Hulu until February, and it won Best Film Drama and Best Director (Chloe Zhao). It was a close race in the top category where it had the same number of nominations as rivals “Promising Young Woman” and “The Father” (four), but fewer than “The Trial of the Chicago 7” (five) and “Mank” (six). So its victory in the top race was far from certain. Winning this prize from the HFPA is no guarantee of Oscar success, but for an unconventional awards contender, this was a significant vote of confidence that could lead it down the intimate-indie-film path that “Moonlight” (2016) took.

“The Father” — Though other February releases cleaned up, this film went zero-for-four despite being up for Best Film Drama. That includes poor Anthony Hopkins, who still has never won a competitive Globe in his career. And Olivia Colman, who until tonight had never lost at the Globes, was bested by left-field candidate Jodie Foster (“The Mauritanian”).

“Mank” — In the worst shut-out of the night, “Mank” went into these awards with a leading six nominations but left empty-handed. No other movie or TV show had that many nominations without a victory. That’s reminiscent of “The Post” (2017) and “The Irishman” (2019), both of which got lots of Globe nominations but didn’t win any, and then were nominated for Best Picture at the Oscars but were blanked there too. Time will tell if this film will recover.

“One Night in Miami” — Missing a Best Film Drama nomination was already a bit of a disappointment, but the film didn’t win any of the three nominations it did get, including Best Original Song, where Leslie Odom Jr. was favored by our users to win for “Speak Now.” That was the only category we were predicting it to claim, so it’s not a drastic shortfall, but it would’ve helped Odom and the film’s case to win something.

“Promising Young Woman” — When the film exceeded our expectations with four nominations including Best Film Drama, star Carey Mulligan soared up our odds for Best Actress. Alas, Andra Day’s upset victory meant that “Promising” was shut out. This would’ve been an invaluable moment for Mulligan to start building momentum towards an Oscar win, but she didn’t get that opportunity.

“The Trial of the Chicago 7” — Aaron Sorkin won for his screenplay, as expected, but the film lost everywhere else, including Best Film Drama and Best Film Supporting Actor (Sacha Baron Cohen) where the film was considered highly competitive.

“Minari” — The film only had one nomination, Best Foreign Language Film, which itself was a controversial categorization given that it was an American film by an American writer-director (Lee Isaac Chung). But it won that award. Let’s not forget that last year’s Oscar winner for Best Picture, “Parasite,” also won this award as its only Globe victory. So we’ll have to see how other awards groups respond to “Minari” from here.

“Soul” — It won Best Animated Feature and Best Score. Could that make it an Oscar contender for Best Picture as well? It’s too soon to tell. It’s not unusual for an animated film to win for its music, so this is not necessarily an indicator of strength in other top Oscar categories.