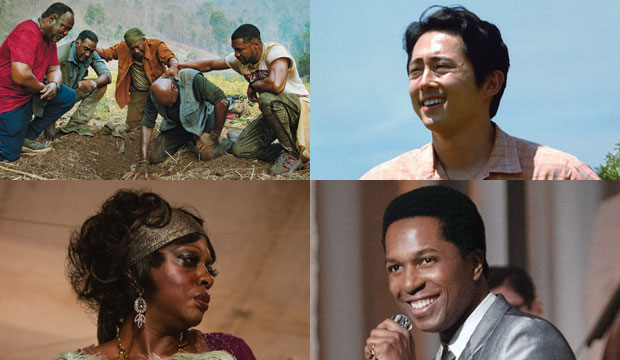 There were a pretty remarkable number of Black and Asian Oscar nominees when the academy announced their picks on Monday morning, March 15. That’s a huge step forward for representation, but it’s hard not to notice what was missing when the Oscars announced the contenders for Best Picture. Check out the complete list of nominations here.

“Ma Rainey’s Black Bottom” earned Best Picture nominations from the Critics Choice Awards and the Producers Guild, as well as a nomination for its ensemble cast from the Screen Actors Guild, but the film was snubbed at the Oscars for Best Picture and Best Adapted Screenplay (Ruben Santiago-Hudson).

“One Night in Miami” was nominated for that same trifecta of precursors, but it too was missing from the Best Picture Oscar lineup, and Regina King didn’t make the cut for Best Director either. “Da 5 Bloods” is absent from every Oscar category save Best Original Score even though it received a SAG nomination for its cast.

“Bloods,” “Miami,” and “Ma Rainey” were also cited among the 10 best films of the year by the American Film Institute, but the only Black-led or Black-directed movie the academy nominated for Best Picture was “Judas and the Black Messiah.” And there are no Black nominees for Best Director, though that category does include two Asian filmmakers and two women — there have never been multiple women nominated for that award in the same year.

But then there are all those acting nominees. Three men of color are nominated for Best Actor (Riz Ahmed, Chadwick Boseman and Steven Yeun). Two Black women are nominated for Best Actress for the first time in decades (Viola Davis and Andra Day). Three Black actors are nominated for Best Supporting Actor (Daniel Kaluuya, Leslie Odom Jr. and LaKeith Stanfield). And Yuh-Jung Youn made history as the first Korean actress to be nominated. Additionally, there are multiple writers of color up for both Best Original Screenplay and Best Adapted Screenplay. (Unfortunately, there weren’t many Latinx or indigenous performers or filmmakers who got much attention this awards season.)

So diversity at these Oscars is kind of like Beyonce at the Grammys: tons of recognition across multiple categories, but still not as well-received in the top race. Nevertheless, the academy recognized an encouragingly wide spectrum of films and performances this year. Let’s hope voters don’t immediately snap back, like how “12 Years a Slave” winning Best Picture was immediately followed by #OscarsSoWhite, or how Kathryn Bigelow‘s Best Director win for “The Hurt Locker” was followed by several more years of exclusively male nominees. As always, progress is a process, not a goal post.