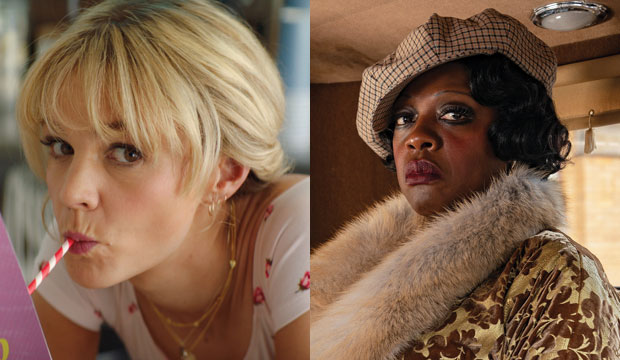 Many of the categories at the upcoming 2021 Oscars seem to be locked up. Chloe Zhao (“Nomadland”) for Best Director? Check. Daniel Kaluuya (“Judas and the Black Messiah”) for Best Supporting Actor? Yep. “Soul” for Best Animated Feature? Duh. But there are four races that are so confounding and downright kooky, I’m losing sleep as we get closer to the Academy Awards. Read on to see the four Oscar categories that are turning my hair gray, and then tell me which ones you’re panicking over in the comments section.

Best Actress — Carey Mulligan (“Promising Young Woman”) is my current pick and also the odds-on front-runner, but she’s far from a sure thing. After all, the only award she’s taken home in the lead-up to the Oscars is the Critics Choice. She lost the Golden Globe to Andra Day (“The United States vs. Billie Holiday”) and the SAG Award to Viola Davis (“Ma Rainey’s Black Bottom”), and she wasn’t even nominated at the BAFTAs, where the champ was Frances McDormand (“Nomadland”). I’m sticking with Mulligan right now because of all the passion for “Promising Young Woman,” plus the fact that Day and Davis could split the vote as they play similar real-life jazz singers in movies that were overlooked for Best Picture. But I reserve the right to change my prediction, possibly several times, between now and Oscar night.

Best Adapted Screenplay — “Nomadland” is Gold Derby’s pick to win here, which makes makes sense on paper — after all, it’s predicted to win Best Picture, Best Director and Best Cinematography. But it’s not a film that’s been universally heralded for its script. I have a sneaking suspicious “The Father” could be the dark horse to win. The Florian Zeller film is experiencing a last-minute surge, winning the screenplay trophy and the lead actor prize for Anthony Hopkins at the BAFTA Awards. Keep in mind that both “Nomadland” and “The Father” were ineligible at last month’s WGA Awards, where the champ was “Borat Subsequent Moviefilm,” so that’s a precursor we shouldn’t put much stock in.

Best Song — My personal pick to win, “Husavik” (“Eurovision Song Contest”), has been skyrocketing in our odds in recent weeks, but it’s still in third place behind “Speak Now” (“One Night in Miami”) and “Io Si (Seen)” (“The Life Ahead”). The biggest thing “Husavik” has going for it is that three of the nominees — the aforementioned “Speak Now” plus “Fight for You” (“Judas and the Black Messiah”) and “Hear My Voice” (“The Trial of the Chicago 7”) — could easily split the vote as they’re all protest songs about fighting for change. If there’s a category ripe for an upset, it’s Best Song. And for what it’s worth, “Husavik” is the only tune that’s actually integral to the plot of the film, as opposed to the other four which are all heard over the end credits.

Best Documentary Feature — Is a doc about a curious octopus really going to win an Oscar? Really? Don’t get me wrong, I enjoyed “My Octopus Teacher” just like the rest of the world, but it simply doesn’t feel important enough to triumph in this hot race. By comparison, the others are about rights for disabled people (“Crip Camp”), racial justice (“Time”), health care fraud (“Collective”) and possible senior abuse (“The Mole Agent”). I really think “Crip Camp” could prevail here thanks to the emotional impact of the film and the fact that it comes from powerhouse executive producers Barack Obama and Michelle Obama, but are Oscar voters actually watching it?