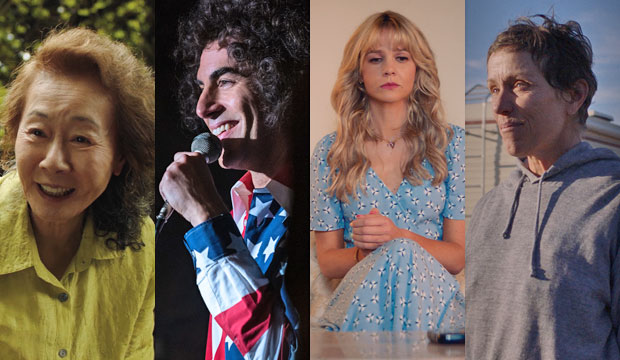 All eight Oscar nominees for Best Picture had at least one nomination at the Screen Actors Guild Awards, which were handed out on Sunday night, April 4. So now that we know the results, let’s take a look at who I think was helped and hurt in the Oscar race for Best Picture. Check out the complete list of SAG Award winners here.

“The Trial of the Chicago 7” — It won the top award for its ensemble cast. That’s not necessarily a sign of how the Oscars will go — only 12 of the last 25 SAG ensemble winners matched the Oscar champ for Best Picture. But after losses at the Golden Globe, Critics Choice, Writers Guild and Producers Guild Awards, this was an important feather in “Trial’s” cap. And the SAG winner has eerily previewed Oscar upsets a few times in the past: “Shakespeare in Love” (1998), “Crash” (2005), “Spotlight” (2015) and “Parasite” (2019). That makes this film a real dark horse.

“The Father” — We weren’t predicting it to win either of its two acting nominations, but Anthony Hopkins had a shot against the late Chadwick Boseman (“Ma Rainey’s Black Bottom”) since the SAG Awards often love veterans (and Hopkins has never won at these awards), and Olivia Colman was in a wide-open supporting actress field with a couple of extra TV nominations for “The Crown” that could have given her a boost. Alas, the film went zero-for-two.

“Promising Young Woman” — Carey Mulligan was the odds-on favorite to win, but she lost to Viola Davis (“Ma Rainey”), which throws another wrench into the Best Actress race since Mulligan isn’t nominated at the BAFTAs due to the new jury system that decided their acting nominations this year. It might also be indicative of less support from industry actors for the film as a whole, though not necessarily.

SEEIs Oscar race between ‘Nomadland’ and ‘Trial of the Chicago 7’ after PGA and SAG Awards? Not so fast – just look at ‘Moonlight’

“Judas and the Black Messiah” — It won its only nomination, for supporting actor Daniel Kaluuya, just as we were expecting. He’s shaping up to be the safest acting front-runner for the Oscars. “Judas” might still be an underdog for Best Picture, but this certainly doesn’t hurt.

“Mank” — The writing was on the wall when Gary Oldman was the film’s only nominee at the SAG Awards. He lost to the aforementioned Boseman, which wasn’t a surprise. The film could yet rally with Oscar voters, though, on the strength of its remarkable craft and technical achievements.

“Minari” — It didn’t win the top ensemble award, which could have really set it up as a challenger to “Nomadland” for the Best Picture Oscar, but the film did win for Yuh-Jung Youn‘s supporting performance in a tough field. During the telecast, no one’s opponents were happier for a win than hers were, showing how strong the film’s overall sentimental support in the industry might be.

“Nomadland” — Frances McDormand lost on the film’s only nomination, but that doesn’t necessarily hurt the film’s Oscar chances since it has won Best Picture from groups like the Golden Globes and Critics Choice Awards without McDormand winning for acting. Awards voters thus far have attributed “Nomadland’s” success primarily to writer-director-editor-producer Chloe Zhao. And McDormand would still win for the film as a producer if it takes Best Picture.

“Sound of Metal” — Riz Ahmed lost to Boseman on “Metal’s” sole nomination. So he remains an Oscar underdog for Best Actor and like “Judas and the Black Messiah,” the film is probably an underdog for Best Picture, though we may yet see it score trophies for its editing and sound.