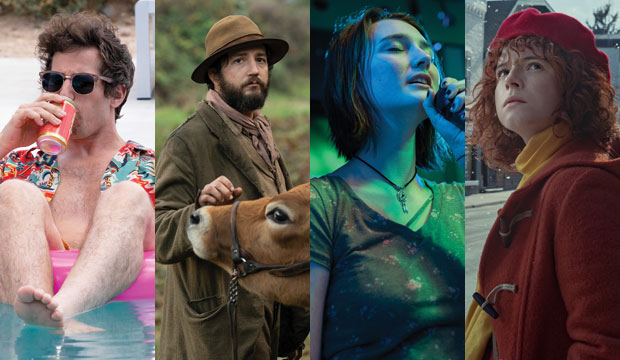 Because there are two screenplay categories at the Oscars — one for original scripts, and one for scripts adapted from other sources — they open the door for more films to be recognized and have often given us surprising and gratifying nominees that don’t show up in any other categories, including “Nightcrawler” (2014), “The Lobster” (2016), “20th Century Women” (2016), “The Big Sick” (2017), “Logan” (2017), and “Knives Out” (2019), to name a few in recent years. So before the Oscar nominations are announced on March 15, let’s consider some of the films that I think could land that lone screenplay nom.

“BORAT SUBSEQUENT MOVIEFILM” — The comedy sequel by all means might not only be a writing nominee. Maria Bakalova remains a strong contender for her breakthrough performance as Borat’s daughter, and the film’s original song “Wuhan Flu” made the Oscars shortlist. But in case the outlandish satirical comedy is still too out-there for the academy in those categories, there’s still the possibility for a Best Adapted Screenplay bid for Sacha Baron Cohen and his team of writers, especially after the film was nominated for that award by the Writers Guild. The first “Borat” film (2006) earned its only Oscar nomination in that same category, so history could repeat itself.

“FIRST COW” — The film about an unlikely friendship on the American frontier was loved by critics and the independent film community, but the Golden Globes ignored it, and so have industry groups like the Screen Actors Guild, Producers Guild and Writers Guild. But it did pick up two nominations from the Critics Choice Awards, including one for its adapted screenplay, and Kelly Reichardt (who co-wrote the film with Jon Raymond, the author of the source novel) fits the mold of an indie auteur who breaks through for the first time at the Oscars as a writer, like Wes Anderson (“The Royal Tenenbaums,” 2001), Alfonso Cuaron (“Y Tu Mama Tambien,” 2002), and Noah Baumbach (“The Squid and the Whale,” 2005), who were all the sole nominations for those films.

“I’M THINKING OF ENDING THINGS” — The Oscars have had a soft spot for Charlie Kaufman for the last 20 years. He earned nominations for writing “Being John Malkovich” (1999) and “Adaptation” (2002), finally won a writing Oscar for “Eternal Sunshine of the Spotless Mind” (2004) and then picked up a Best Animated Feature bid for his offbeat stop-motion “Anomalisa” (2015). This mind-bending film about a woman ambivalent about her relationship with her boyfriend is one of Kaufman’s weirdest films — which is saying a lot — but the respect he has received from the industry for thinking outside the narrative box could be enough to break him into Best Adapted Screenplay this year.

“THE MAURITANIAN” — The legal drama about an innocent man imprisoned at Guantanamo Bay earned a couple of Golden Globe nominations for actors Tahar Rahim and Jodie Foster (with Foster winning in an upset). Then it cleaned up at the BAFTAs with bids for Best Picture, Best Actor (Rahim again) and Best Adapted Screenplay for scribes Rory Haines, Sohrab Noshirvani, and Michael Bronner. So it’s probably at least on the bubble in several categories at the Oscars. But even if it misses everywhere else, there’s a possibility we’ll see it represented for its writing.

“NEVER RARELY SOMETIMES ALWAYS” — Like “First Cow,” this story of a teenage girl traveling to New York for an abortion racked up lots of awards recognition from critics, but we haven’t seen it perform as well with industry groups. However, Best Original Screenplay could be an opportunity for the academy to honor writer-director Eliza Hittman‘s achievement.

“NEWS OF THE WORLD” — If this film does earn a Best Adapted Screenplay nomination for Paul Greengrass and Luke Davies, it will probably be accompanied by at least a couple of other nominations in craft categories like Best Sound, Best Cinematography and Best Production Design, but this Western is reminiscent of past films that seemed like strong early contenders in many categories but ended up relegated to just a writing nomination, like “The Ides of March” (2011) and the aforementioned “Nightcrawler.” So there’s an off chance that this film will only resonate with the writers branch.

“ON THE ROCKS” — Bill Murray received nominations from the Golden Globes and Critics Choice Awards for his performance, but surprisingly the film hasn’t resonated nearly as strongly in other categories despite positive reviews and an Oscar-winning writer at the helm, Sofia Coppola (“Lost in Translation”). But the academy’s writers branch has been fond of character-driven comedies in the past like “Sideways” (2004) “Juno” (2007), “The Savages” (2007) “Lars and the Real Girl” (2007), “Happy-Go-Lucky” (2008), and “The Disaster Artist” (2017), so don’t count this one out.

“PALM SPRINGS” — Speaking of comedies, this film received abundant acclaim and a Writers Guild nomination for Andy Siara and Max Barbakow. And this film’s premise — a love story caught in a time loop — could especially appeal to the industry’s storytellers, as have other films with clever structures or imaginative setups like “Memento” (2001), “Inception” (2010), “Her” (2013), “The Lobster,” and the films by Charlie Kaufman.

“THE WHITE TIGER” — Like “The Mauritanian,” this film about an Indian man who rises through society picked up a Best Adapted Screenplay nomination from the BAFTAs. And like “First Cow,” it’s written and directed by an auteur (Ramin Bahrani) who hasn’t gotten his due from the motion picture academy yet. Bahrani was also nominated for this script by the Writers Guild, so don’t be surprised if he makes the cut at the Oscars too.