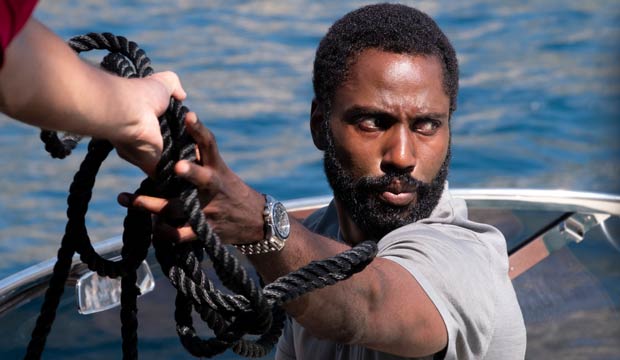 Christopher Nolan’s latest mind-bending action extravaganza had a tumultuous journey to theaters last year. Unlike many films that were delayed indefinitely due to the pandemic, or were released on streaming services, Warner Bros’ “Tenet” had a normal theatrical release; unfortunately, not too many theaters were actually open. Still, it came out, and thus it is one of the few blockbusters to be competing in the Oscars this year. And like most of the director’s big screen outings, it’s sure to be a below-the-line contender.

The sci-fi thriller follows a secret agent known only as The Protagonist (John David Washington) who learns how to manipulate the flow of time in order to stop a Russian arms dealer (Kenneth Branagh) from destroying our present world. Like most of Nolan’s previous blockbusters, it features elaborate set pieces with stunning special effects and real practical stunts. It’s no wonder his films do so well in the tech categories.

His last outing, “Dunkirk,” won for Best Film Editing, Best Sound Editing and Best Sound Mixing, while being nominated for Production Design and Cinematography (along with Best Picture and Best Director for Nolan). Before that, his space epic “Interstellar” won for Visual Effects and was nominated for Sound Mixing, Sound Editing and Cinematography. According to our odds, “Tenet” has a good chance of performing similarly this year.

Currently “Tenet” is ranked in the top five for Best Sound (formerly two categories, Sound Editing and Sound Mixing, which were combined this year), Best Production Design and Best Cinematography in our prediction center. There is a good chance the Academy will be impressed enough with the film’s sleek aesthetic and spectacular on-location action sequences to give the film nominations in the latter two categories.

Tech categories are where bombastic Hollywood tentpoles tend to shine, but with so many other studio offerings delayed until 2021 and beyond, “Tenet” finds itself in the unusual situation of having no real competition among its peers. Its primary challengers are all smaller dramas, with period pieces like “Mank” and “Ma Rainey’s Black Bottom” providing its only real competition in design categories. Whether you look at this race forwards or backwards, it’s clear that “Tenet” is the blockbuster to beat.