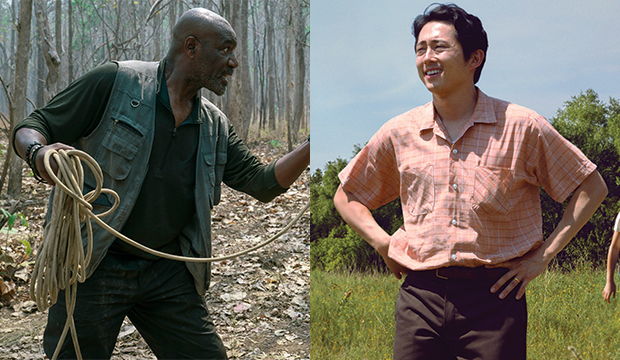 Yeun and Lindo also swapped spots in the combined odds last week. Neither switcheroo is that surprising given how the precursor nominations have shaken out. Yeun and Lindo were both snubbed by the Golden Globes and were both nominated by the Critics Choice Awards (in a field of eight). Their paths diverged at the Screen Actors Guild Awards, where Lindo was MIA again, but Yeun made the cut. Not only that, but “Minari” over-performed with three nominations total, the others in ensemble and supporting actress for Youn Yuh-jung. Lindo is SAG-nominated as part of the “Da 5 Bloods” cast, but the film’s sole individual acting bid was for Boseman’s supporting turn.

For Lindo, who has won critics’ awards including two biggies from the New York Film Critics Circle and National Society of Film Critics, this is an unfortunate turn of events. Since “Da 5 Bloods” dropped on Netflix in June, he’s been touted as a Best Actor contender and was in second place early in the season, behind Hopkins, before gradually dropping down to fifth as Boseman, Ahmed and Oldman made headway.

Yeun has had the opposite trajectory, hovering in the back half of the top 10 initially before settling into a distant sixth-place spot. He understandably surged after “Minari’s” SAG nominations — a huge hat trick for the indie since reigning ensemble and Best Picture Oscar champ “Parasite” failed to get any individual nominations for its actors at SAG or the Oscars last year. And of course, unlike the Globes and Critics Choice, the SAGs are industry awards with membership overlap with the academy. Yeun also has another advantage over Lindo: “Minari” just opened theatrically on Friday, so it’ll be more top of mind as we head into the business end.

If Yeun makes it, he’ll be the first East Asian Best Actor nominee.