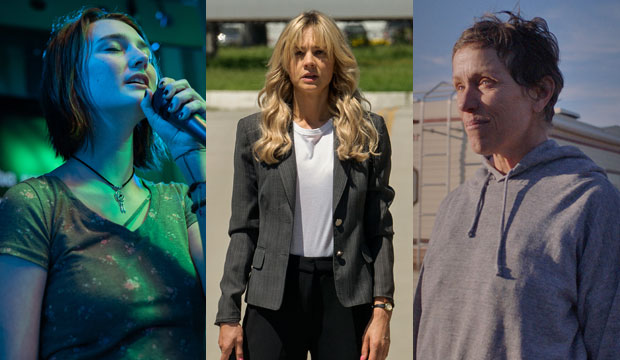 “Never Rarely Sometimes Always,” “Promising Young Woman” and “Nomadland” have made strong impacts in the early awards season, including for their screenplays by Eliza Hittman, Emerald Fennell and Chloe Zhao, respectively. If any of them go all the way to the Oscar podium, it’ll only be the third time that a woman wins a writing prize for a movie she wrote and directed herself.

Only seven women have ever won Best Adapted Screenplay in the history of the Oscars; of those, Ruth Prawer Jhabvala is the only one to win twice, for “A Room with a View” (1986) and “Howards End” (1992). Women have had slightly better luck in the Best Original Screenplay contest, where 11 female scribes have won, with Frances Marion prevailing twice for “The Big House” (193) and “The Champ” (1931).

SEE‘Promising Young Woman’: Will the Oscars respect female rage like they usually do male rage?

Prawer Jhabvala and Marion are also among the only seven women who have ever won a writing Oscar solo. The others were Callie Khouri (“Thelma and Louise,” 1991), Jane Campion (“The Piano,” 1993), Emma Thompson (“Sense and Sensibility,” 1995), Sofia Coppola (“Lost in Translation,” 2003) and Diablo Cody (“Juno,” 2007). Only Campion and Coppola directed the movies they wrote, as Hittman, Fennell and Zhao have done this year.

So this has the potential to be an especially groundbreaking year for female filmmakers. Only five have ever been nominated for Best Director, with Kathryn Bigelow (“The Hurt Locker,” 2009) being the only one to win. Zhao leads our Best Director odds as of this writing, and she’s also the front-runner for Best Adapted Screenplay. Meanwhile, Fennell is among our top 10 contenders for Best Director and is an expected nominee for Best Original Screenplay. Hittman is an underdog in both of those race so far.

But in a year with multiple women racking up praise and plaudits for their work behind the camera this year — along with Zhao, Hittman and Fennell, Regina King (“One Night in Miami”), Kelly Reichardt (“First Cow”) and the aforementioned Coppola (“On the Rocks”) have been in the awards conversation this season — perhaps this will be the first year in history when women sweep the writing and directing Oscars, as men do routinely.

Heck, no woman has won any of those three categories in over a decade. Bigelow’s landmark directing win was actually more recent than the last female writing winner (Cody in 2007). It’s like the glass ceilings have been reinstalled in the last 10 years and need to be broken all over again.