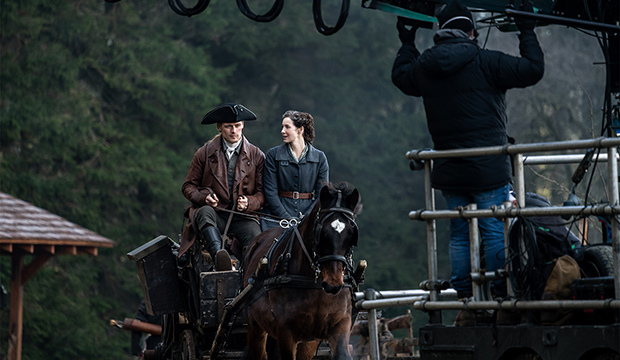 It has been nine long months since fantasy romance blockbuster “Outlander” aired its devastating Season 5 finale on Starz, to rapturous applause from fans and critics. Since then, the show’s devoted fans have suffered through yet another interminable droughtlander, their anxiety and anticipation at fever pitch because production for the show’s sixth season, which was originally supposed to start last May, was put on hold due to the coronavirus pandemic.

But never fear, fellow “Outlander” devotees, we’re now a little bit closer to the greatest show on Earth returning to our screens. Starz and Sony Pictures Television finally called “action” in Scotland on Feb. 9 with COVID protocols to ensure cast and crew’s safety on set over the next few months.

Last we saw Claire (Caitriona Balfe) and Jamie (Sam Heughan),  Claire had returned to Frasers’ Ridge after being brutalized by the nefarious Brown brothers’ clan. Meanwhile, the threat of the Revolutionary War prompted Claire, Jamie, daughter Brianna (Sophie Skelton) and her husband Roger (Richard Rankin) to contemplate what was best for their extended family. Watch Gold Derby’s video recap of the finale, titled “Never My Love,” to relive the highs and lows of the acclaimed episode.

The upcoming sixth season is based on “A Breath of Snow and Ashes,” the sixth installment in acclaimed author Diana Gabaldon‘s “Outlander” series of novels. As expected, leading stars Balfe and Heughan will be back in action as time traveling nurse Claire and her Highlander true love Jamie, alongside Skelton and Rankin. Further cast returnees and additions will no doubt be announced in the coming weeks as we learn more about the new season, which we expect will be likely premiere toward the end of the year.

To whet your appetite in the meantime, check out the first look photo above and video and Starz’s synopsis of the season below.

“The sixth season of ‘Outlander’ sees a continuation of Claire and Jamie’s fight to protect those they love, as they navigate the trials and tribulations of life in colonial America. Establishing a home in the New World is by no means an easy task, particularly in the wild backcountry of North Carolina – and perhaps most significantly – during a period of dramatic political upheaval. The Frasers strive to maintain peace and flourish within a society which – as Claire knows all too well – is unwittingly marching towards Revolution. Against this backdrop, which heralds the birth of the new American nation, Claire and Jamie have built a home together at Fraser’s Ridge. They must now defend this home – established on land granted to them by the Crown – not only from external forces, but also from the increasing strife and conflict in the community within their care. For the Frasers and their immediate family, ‘home’ is more than simply a site in which they live, it is the place where they are laying the foundations for the rest of their lives. If Season 4 asked, ‘What is home?’ and Season 5 asked, ‘What are you willing to do to protect your home?’ then Season 6 explores what happens when there is disharmony and division among the inhabitants of the home you’ve created: when you become an outsider, or an ‘outlander,’ so to speak, marginalized and rejected in your own home.”