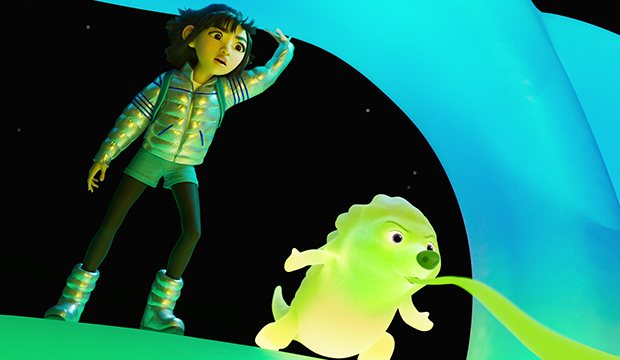 Is there a chance that the race for Best Animated Feature at the Oscars is a bit more fluid than we think? And which film would stand to benefit if that is case? Right now, according to our odds, it just might be Netflix’s animated musical “Over the Moon.” The film is in third place in our combined odds (9/2) behind “Wolfwalkers” (19/5) and “Soul” (82/25). And the idea isn’t as far-fetched as you might think.

“Over the Moon” tells the story of a young Chinese girl named Fei Fei (Cathy Ang). Several years after losing her mother to a terminal illness, her father gets engaged to another woman, which angers Fei Fei. When her father additionally reveals that he no longer believes in the story of the Moon goddess Chang’e (which she first learned about from her late mother), Fei Fei constructs a rocket to fly to the moon in order to prove that Chang’e is real. The film also features the voices of Sandra Oh, Phillipa Soo, John Cho and Ken Jeong, and is directed by Oscar winner Glen Keane (Best Animated Short, “Dear Basketball,” 2018).

Netflix is mounting an aggressive campaign for the film, and we’ve seen how that’s played to its advantage in this race in the past. Just last year, the streamer put a coordinated push behind its Christmas film “Klaus” that resulted in a victory at BAFTA and swept the Annie Awards. Several of our Experts and editors predicted it to win Best Animated Feature at the Oscars. While it did come up short in the end, it further displayed how Netflix has become a much more sophisticated campaigner in getting its films recognized.

It does feel weird that this could be possibility. Just three weeks ago, Pixar’s “Soul” was in the top 10 of our combined odds for a Best Picture nomination. But with some mixed reaction to the film that left some people wanting something more than what they got, this could make its standing look weaker in the Best Animated Feature race. One thing that could play a factor in this is that Pixar will most likely be competing against itself as “Onward” is currently in fourth place in our combined odds for a nomination (“A Shaun the Sheep Movie: Farmageddon” is in fifth). This has never happened before for the studio and there’s a possibility that some vote-splitting could occur. While “Wolfwalkers” would seem to be the likely beneficiary of this, there’s also a chance that that film doesn’t resonate as much with Oscar voters since it has a much more arthouse vibe to it.

While this is all just speculation at this point, there’s a key moment coming up that could start that momentum moving in the film’s direction, and that’s the Golden Globe for Best Animated Feature. The Hollywood Foreign Press Association has shown several times that it is willing to buck what looks like an overwhelming frontrunner in the category. In 2011, the Globes went with “The Adventures of Tintin” over more favored films like “Arthur Christmas” and eventual Oscar winner “Rango.” In 2014, they chose to honor “How to Train Your Dragon 2” over “The LEGO Movie,” and last year, “Missing Link” won over “Toy Story 4” and “Frozen II.” If “Over the Moon” pulls off a victory there, don’t be surprised if a lot of other pieces start falling into place for it.