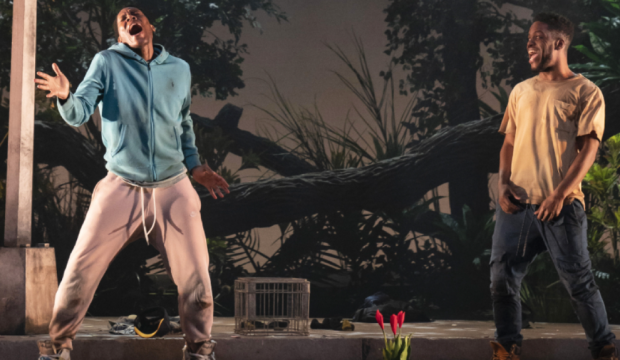 Almost 18 months after the last new show opened on Broadway – the musical “The Girl from the North Country,” which bowed on March 5, 2020 – the New York theatre community celebrated the rialto’s return with the premiere of “Pass Over.” Antoinette Chinonye Nwandu’s play opened at the August Wilson Theatre on August 22 under the direction of Danya Taymor.

Inspired by both Samuel Beckett’s “Waiting for Godot” and the book of Exodus, “Pass Over” occurs under the glow of a single streetlight. With a deft balance of comedy and horror, joy and sorrow, Nwandu explores centuries of systemic racism, including the plantation and the present, through the conversations between the indefatigably optimistic Moses (Jon Michael Hill) and Kitch (Namir Smallwood), which are punctuated by the two different white men (both played by Gabriel Ebert) who disrupt their space.

WATCH 2021 Tony Awards slugfest: Who has the edge in the incredibly competitive Play races?

“Pass Over” received favorable reviews from critics. Jesse Green (New York Times) names this “thriller of a production” a Critic’s Pick. He praises playwright Nwandu for letting the play’s “innate surrealism fully flower in a daring and self-consciously theatrical way” in its “gorgeous rendered” finale and applauds director Taymor, who “could hardly support that vision better.” Tony-winning Ebert (“Matilda The Musical”) receives kudos, too, as the actor “manages the virtuoso trick of making obtuseness both weird and charming.”

Helen Shaw (Vulture) describes the show as “rhapsodic,” featuring a “deft twist” on Beckett, “Hill’s charisma and Smallwood’s charm,” and an exchange between them and Ebert’s character Mister that she says is “already one of the theater’s great scenes.”

Similarly, Peter Marks (Washington Post) applauds Nwandu’s work as “a smart, sleek commentary on being young and Black and craving the peace of mind that comes with not feeling there’s a target on your back.” He cheers the “protean talents of Hill and Smallwood,” calling their work “magnetic.”

Though the Tony Awards celebrating the 2019-2020 Broadway season have yet to occur – they will be doled out on Sept. 26 at the Winter Garden Theatre – “Pass Over” kicks off the 2021-2022 awards season and will likely be a strong contender. As of this writing, the season is slated to feature nine new plays, including works from previous Tony winner Tracy Letts and nominees Lucas Hnath, Dominique Morisseau, and Lynn Nottage.

As Christian Lewis (BroadwayWorld) observes, “Pass Over” “is exactly what Broadway needs to be… an extraordinary beacon” as the theatre community strives to be more inclusive and equitable. The Tony nominating committee will not likely pass on the opportunity to recognize such a topical and transcendent work.

PREDICT the Tony winners through September 26