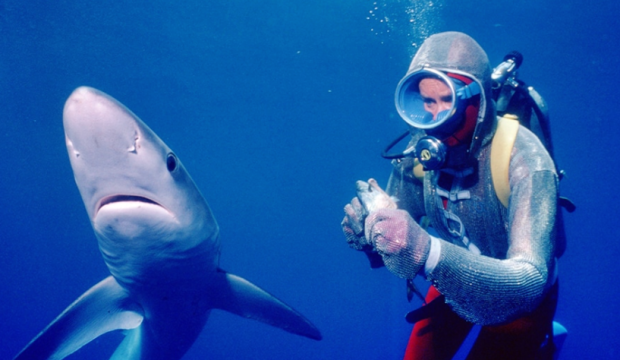 Valerie Taylor, the legendary Australian marine conservationist who has spent most of her life fighting for the preservation of sharks, is no shrinking violet. When producer Bettina Dalton and director Sally Atkin approached the 85-year-old to be the subject of their National Geographic/Disney + documentary “Playing with Sharks,” she agreed to participate while telling them “I want it done my way.’ ” And, as she revealed in a recent Zoom conversation about the documentary premiering July 23 on the streaming service, “they looked at me and said ‘huh? That’s what you think.’ I’ve been in the industry for well, before they were born, I think. I had my own ideas. Nobody listened to me. They persevered!

Still, Taylor said smiling, “when I see the film, I understand why it’s such a success I’m delighted with the story it tells.” So have critics. “Playing with Sharks” which was in the World Cinema Documentary competition at this year’s Sundance Film Festival, is currently rated 100% fresh on Rotten Tomatoes. The film chronicles the life of the pioneering Taylor, who burst upon the scene as a diver and champion spear fisher in the 1950s.

A slim stunning blonde who wore her hair in a ponytail tied with a pink ribbon managed to break through in the male dominated universe of diving. She met and fell in love with Ron Taylor, who was then World Spear-Fishing Champion, and the couple were married for 50 years. Most of the gorgeous vintage footage was shot by Ron, who died in 2012.

Valerie Taylor truly loves sharks. She’s still fighting against the killing of thousands of sharks each year for shark fin soup. She’s battled to get ocean conservation areas for her beloved sharks. They are not killers or assassins, she insists. And to prove her point, Taylor presents a photo of a Great White with a big, albeit toothy, smile. They are very big wet dogs to Taylor. During her deep-sea fishing days, Taylor did kill a shark. “I wish I hadn’t,” she confesses in the movie. “But there was so much life in the ocean, you thought you didn’t make a dent.”

The Taylors put up their spears and began their conservation efforts in 1965 after Ron went on an expedition without Valerie–the captain wouldn’t allow women on his boat-to film Great White sharks. The expedition ended up with the slaughter of five sharks. They became documentary filmmakers and consultants on movies. They shot the real shark footage in “Jaws.” They would soon regret doing the film because the 1975 Steven Spielberg blockbuster caused the slaughter of Great Whites.

Dalton was a young girl when she saw Taylor on the cover of National Geographic magazine. “It changed me. There was my superhero. It influenced my path to study zoology and becoming a natural history filmmaker. About 22 years ago, I got the opportunity to direct a three-part series on Ron and Valerie’s life for National Geographic. Their careers were definitely still in full momentum, and we went on to make a couple of films.”

About four years ago, Dalton had another “lightning bolt moment” when she saw “Jane,” the award-winning documentary on English primatologist Jane Goodall. “I just sat there and said, ‘Hold on second, we’ve got our own living Jane who has this rich archive and whose story has never been told.’ It was an absolute travesty to think that it hadn’t been told. “ Dalton approached Atkin who had just come off another film, about doing “Playing with Sharks.”

“You know you have a responsibility and a privilege when you’re tasked with the carriage of telling a life story,” Atkin explained.  “As I knew a little bit about Valerie’s life I wanted to keep knowing more and more. This was an incredibly good indication of the depth of the story that was possible’. Atkin said she made a very conscious decision not to make a ‘conservation” film. “I wanted to feel that the experience of watching and absorbing life was immersing yourself in the marine environment through the eyes of someone who, by following her trajectory, might, in turn, make you feel a little bit differently about those things sometimes called assassins that we really need in our web of life.”

The director has an extraordinary treasure trove of Ron Taylor’s landmark footage. “He was not only a groundbreaking technical marvel who made all of his own housings, Ron was also an artist,” said Atkin. “His composition was incredible. We wanted that original footage and complement the style of the contemporary footage.”

Atkin has Taylor tell her story while she prepares to return to Fiji to swim with sharks. She has a hard time tying the pink ribbon around her ponytail and must have help getting into her pink dive suit after pulling her shoulder. But the ocean becomes her fountain of youth- she is like a teenager swimming with her adored sharks. And she’s very exciting exiting the water that one of the sharks bops her. “She was really unimpressed that I wanted to film so much contemporary footage of herself,” said Atkin with a smile. “But I think she appreciated the endeavor. I think that’s fair to say, Valerie that you were less than thrilled about that aspect of the film.” “I wasn’t thrilled at all actually,” Taylor responded, laughing.