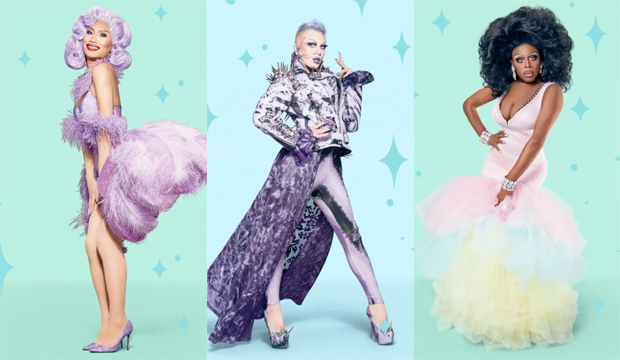 This season on “RuPaul’s Drag Race,” it apparently pays off to win early. In the premiere episode, host RuPaul Charles separated the queens into two groups based on whether they won or lost their initial head-to-head lip syncs. The champs celebrated by calling themselves the “A-Team,” while the losers entered the Pork Chop Lounge and had to vote out one of their own on the spot (they chose Elliott with 2 Ts, whose “punishment” was to simply switch teams). The two groups reunited weeks later, which is when the Season 13 competition truly began. Three queens have been eliminated so far, but none of them have been from the original “A-Team.” Hmm, is there a Pork Chop curse?

Kahmora Hall was the first contestant to sashay away. She entered the Pork Chop Lounge in the first episode after losing her lip sync of “Lady Marmalade” to Tina Burner. She was one of the safe queens in the third episode, in which the contestants had to write original lyrics to Ru’s song “Phenomenon” and perform them on the big stage. The following week, Kahmora failed to deliver in the “RuPaulmark Channel” acting challenge and then lost her lip sync of “100% Pure Love” to Denali, so she got the chop, for real this time.

The second eliminated queen was Joey Jay, who became a Pork Chop member in the premiere after Kandy Muse beat her at the “Call Me Maybe” lip sync. Joey was deemed safe in the third and fourth episodes (“Phenomenon” and “RuPaulmark Channel”), but then hit a snag in the fifth week, “The Bag Ball,” in which she had to showcase three separate bag looks. LaLa Ri proved victorious in their lip sync battle to “Fancy,” so Joey packed up her stuff and returned home.

Last week Tamisha Iman‘s time came to an end. The colon cancer survivor didn’t survive her debut lip sync against Symone of “The Pleasure Principle,” so she joined the other Pork Chops. Tamisha was then marked safe in the first two main challenges, but she received low marks with her trio of looks for “The Bag Ball.” The 49-year-old queen’s bad luck continued in the sixth episode when she lost her lip sync of “Hit ‘Em Up Style (Oops!)” to her frenemy Kandy.

If there is indeed a Pork Chop curse, then the following three members need to step their kitties up in the coming weeks: Denali, Rosé and Utica Queen. (Elliott with 2 Ts also spent some time in the losers lounge, though she was quickly voted out by her teammates and, in a twist, allowed to join the winners lounge instead.) The good news for the Pork Chop girls is that two “A-Team” members had to lip sync for their lives the past couple of weeks — Kandy and Lala — so it still appears to be anybody’s game.

The term “Pork Chop” originates from the series premiere episode of “RuPaul’s Drag Race” in 2009, when Victoria “Porkchop” Parker became the very first queen to ever sashay away.