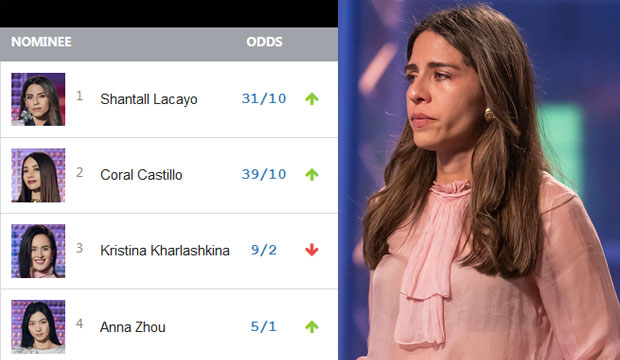 Christian Siriano has used up his Siriano Save, and there is no longer immunity for winning challenges, so it’s now do or die for every designer on “Project Runway.” With only eight contestants left after last week’s double elimination, who will end up on the chopping block? “Runway” fans have been making their predictions here in our predictions center. Check out their complete odds here.

Shantall Lacayo was the recipient of the Siriano Save in “Are You Fur Real?” when judges disliked the avant-garde fur coat she made with teammate Kristina Kharlashkina. But because Kharlashkina had immunity from winning the previous challenge, they had no choice but to eliminate Lacayo. Siriano said “hell no” to that and kept her in the competition. I was fully onboard with that decision because I’m on record saying that her faux fur coat was rad, actually.

But most of our users say Lacayo will be out this time. She gets leading 31/10 odds of being sent home. She has already been eliminated once, so there’s obviously precedent for the judges disliking her work. However, she won the “Flower Power” challenge in week four, and so far no one who has won a design challenge this season has been eliminated. In fact, only two out of the eight remaining designers are still without a challenge win.

One of them is Coral Castillo, who got a low score from the judges last week in “Couch Couture.” That was her only low score this season so far, but a strong track record overall wasn’t enough to keep former front-runner Octavio Aguilar in the competition; he was sent home in that episode along with Zayden Skipper.Perhaps that’s why Castillo ranks a close second in our elimination predictions with 39/10 odds.

The other designer without a win is Aaron Michael Steach, but he has gotten four high scores, and he’s the only contestant who still hasn’t gotten a single low score. None of our users think he will be eliminated. But no one is safe anymore, so it only takes one bad day to end your “Project Runway” journey. Do you agree with our odds that Lacayo or Castillo will be ousted from the competition, or are we in for a surprise?