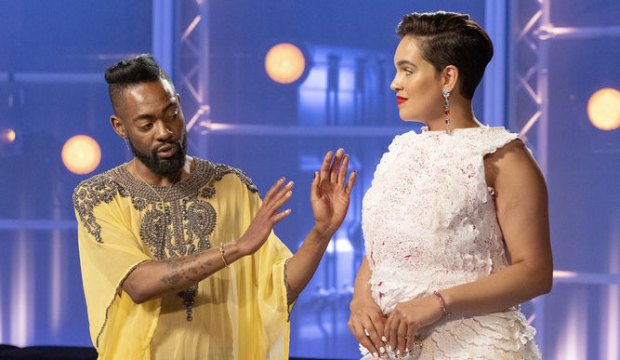 “Project Runway” designer Prajje Oscar Jean-Baptiste didn’t think the judges got it right when they eliminated him from the show in “The Last Straw,” this season’s unconventional materials challenge. He said as much to Christian Siriano during the after show. But when we polled our readers, almost two thirds of respondents thought the judges made the right call. Scroll down for the complete poll results at the bottom of this post.

DISCUSS‘Project Runway’ and more in our infamous forums

Jean-Baptiste was sent home for the ill-fitting cocktail dress he made using just the pleather upholstery and doilies he scavenged from a cocktail bar. The judges didn’t think the look was flattering, and felt that his model was overwhelmed with the doilies. More than 64% of fans agreed with the judges decision, which came despite the fact that Jean-Baptiste was a previous judges’ favorite who had won the “#Streetwear” challenge in week two. But there are no more Siriano Saves and no more immunity from elimination with challenge wins, so now is when the competition is at its toughest.

But just over 16% of readers did agree with Jean-Baptiste that Chasity Sereal should have been sent home. She was well aware of the problems she was having, running out of time as she was furiously spray-painting coffee filters and gluing on tons of beads made out of cut-up straws. Her dress barely stayed intact as her model strutted it down the runway, leaving a trail of debris in her wake. But the judges appreciated the shape and style of the dress she was going for, which was more than they could say for Jean-Baptiste. They also might have been swayed by the fact that Sereal had won two challenges; perhaps they thought she showed more promise as a designer overall.

See the rest of our results below.