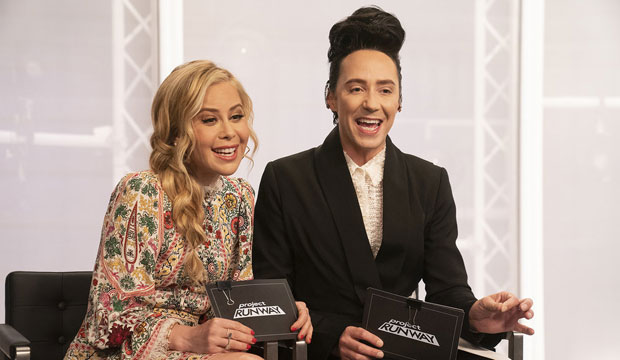 On last week’s fourth episode of “Project Runway” season 19, Gigi Hadid was the guest judge in a “Flower Power” challenge that saw the 13 designers create custom floral prints for a look that would emphasize the versatility of flowers. Darren Apolonio fell to the bottom of the pack again for failing to convey his concept in a look that made sense or showed the judges anything new from him, and was eliminated. Tonight the remaining 12 were paired off for a sequins-focused challenge with Olympian guest clients Tara Lipinski and Johnny Weir.

Below, read our “Project Runway” recap of season 19, episode 5, titled “Go for the Gold… Sequin,” to find out what happened Thursday, November 11, when the designers attempted to work together to bring two visions into one. Then be sure to sound off in the comments section about your favorite designers on Bravo’s reality TV show, who has the best aesthetic, and who you think will ultimately be named the next big name in fashion.

When the designers returned to the runway to learn of their next challenge, Aaron knew exactly who the silhouettes that appeared belonged to: Tara and Johnny! As commentators and Olympic figure skaters, Tara and Johnny know sequins better than anyone else. With that in mind, they asked the designers to create looks for them to wear live when commentating during the 2022 Winter Olympics. For this challenge, they’d compete in teams of two with one designer creating a look for Tara and the other creating the look for Johnny. To pick the pairs, Johnny randomly handed out model cards that were color-coded to pair off the designers: Octavio and Katie, Bones and Anna, Zayden and Chasity, Shantall and Aaron, Sabrina and Prajje, and Kristina and Coral.

As guidelines for the challenge, Johnny and Tara advised them to focus on what appears above the waist because that’s all that shows when commentating on TV, and to make a statement. Tara wanted a dress with an interesting neckline and Johnny requested a “full ‘Hunger Games’ vibe” with structure. But they stressed not to make it too voluminous and to include a lot of color. To make it even more stressful, they dropped the bomb that it’d be a one-day challenge.

During their brainstorming sessions, the teams considered what colors and silhouettes would look good on television and took into account what the two athletes had worn in the past. Paired with Shantall who has immunity, Aaron was worried that he’d be especially vulnerable if they didn’t succeed, while Katie and Octavio were concerned with their ability to blend their styles together into a vision that works.

At Mood, Christian Siriano gave the pairs $1,200 and 45 minutes to shop for fabric. Surprisingly not darting straight for the sequins, the designers instead spread out in different sections looking for different colors. Anna and Bones were the most chaotic, running frantically at the end to make sure they had all their fabrics in line by the end of the time limit.

Back in the workroom, the teams organized and got to work on their garments. Christian dropped by for his usual check-in, but before stopping by each station he brought the group together to announce that once again this season he’ll have a “Siriano Save” at his disposal to save an eliminated designer from going home in case he feels the judges’ decision is unjustified.

During his check-ins, Christian warned Anna and Bones about their all white vision being too literal and ice skater-y, suggesting that they swing it in a more fashionable direction. And with Octavio and Katie, Christian was worried that their plans to use big ruffles was creating too much volume. After their critique, Katie was worried that because Octavio is a more dominant personality she would have to take a back seat and scale down her look so that they both aren’t too over-the-top.

Later, Anna went looking for one of the fabrics she thought they had bought only to realize that they forgot to cut a portion of one of the fabrics that Bones would use for the inside of his garment. To fix their problem, they re-patterned so that they could use the same fabric for the pants and vest and then play around with a mirror fabric as an overlay.

During the model fittings, Christian returned to Octavio and Katie to explain that their two looks were veering in two different directions. While Octavio pointed out that it doesn’t need to be a cohesive collection, Christian urged them to find a way to let the two looks speak to each other. This continued the pattern of Octavio taking the lead and asking Katie to make changes to her garment that fit more with his.

They weren’t the only team that wasn’t working well together though. On the other side of the room, Prajje was growing frustrated that he had worked on so many elements over the course of the day while Sabrina hadn’t accomplished much beyond a vest. By the end of the work day, Sabrina was breaking down with exhaustion (she was in pain from her rheumatoid arthritis, which she hadn’t opened up to the other designers about), and Prajje was not sympathetic to her at all. Eventually Prajje apologized and acknowledged that he had reached his own breaking point and reacted emotionally.

The next day on the runway, Tara and Johnny joined series judges Nina Garcia, Elaine Welteroth, and Brandon Maxwell to score the looks. Aaron and Shantall were happy with the presentation of their matchy-matchy black and navy blue designs. Prajje was worried that Sabrina’s look for Johnny looked too much like a matador’s costume. Kristina and Coral were high on how well their black and gold looks with rope accents worked together. Chasity and Zayden were expecting their deep red looks to be among the top, while Katie thought her and Octavio’s looks might have been too huge and too punk for the clients. Bones and Anna were the last to walk and they loved the way their white sheer and beaded garments presented.

After the show, Nina explained that because Johnny and Tara would be wearing the clothes, they selected their top two teams while the overall scores determined the bottom two teams. The two safe teams were Coral and Kristina and Zayden and Chasity, leaving the other four teams to hear critiques. The first favorite set of the night was from Anna and Bones. Tara liked the simple elegance, and Johnny appreciated that the highlights of the looks were focused above the waist. Brandon thought that the vest Bones made was too crafty compared to the elegance of the beading on Anna’s dress. Johnny declared that if they won he wouldn’t wear the vest and instead go “full nipple” with the sheer top. The other top team was Aaron and Shantall, though Tara and Nina both found the dress for Tara to be a letdown from the waist up. And Elaine didn’t like the color story because it wouldn’t read as exciting enough on camera.

The first team on the bottom were Prajje and Sabrina. They explained that they were inspired by gold medals for their gold and red color story, but that their collaboration as artists was not as good as they would have hoped. Johnny’s comment was that Sabrina created a cartoon version of what a figure skater would wear, while Nina said that their looks seemed to be fighting for attention rather than complementing each other.

Also in the bottom were Katie and Octavio. Octavio explained that they also had trouble with their meeting of the minds, but Elaine had to stop him because he was focused on where Katie may have fallen short while the fabric on his look was a big part of the problem. Johnny pointed out that the ruffles on Octavio’s look were so big that they’d drown Tara out next to him on camera. Both Elaine and Katie were disappointed that Katie’s voice was muted because this was a challenge she could have done well in.

During their deliberations, the judges agreed that there were stellar aspects of the top looks, but also parts that didn’t quite work. And when it came to the bottom teams, they wondered whether Katie and Sabrina were each running out of second chances after multiple challenges with low judges’ scores. Ultimately, Johnny and Tara chose the winners as the looks that exemplified them the best and would “steal the show.” For them, the winning team was Anna and Bones, but the overall winner was Anna for her elegant beaded dress.

From the bottom, the judges thought that both teams failed at working together, but at the end of the day it was Sabrina’s red and gold costume for Johnny that was their least favorite. Backstage, Christian did not use his save on Sabrina and so she was eliminated.

NEXT WEEK: Each designer is paired with an accessory designer for a mini collab. 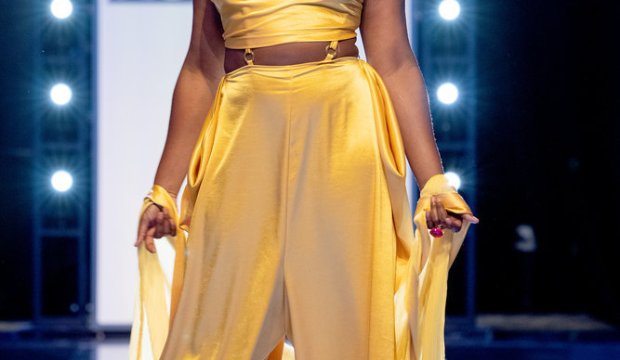