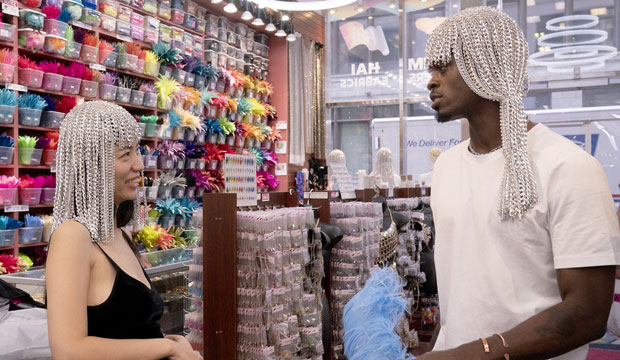 On last week’s fifth episode of “Project Runway” season 19, the 12 remaining designers worked in pairs to create exciting looks for Tara Lipinski and Johnny Weir to wear as commentators at the upcoming 2022 Winter Olympics. As the clients, Tara and Johnny chose Anna and Bones as the winners for Anna’s stunning white beaded gown for Tara and a complementary look for Johnny created by Bones. They weren’t as jazzed by what Sabrina and Prajje assembled for them, and opted to send Sabrina home for her costumey interpretation of the assignment.

Below, read our “Project Runway” recap of season 19, episode 6, titled “Fashion Is Back, Baby!,” to find out what happened Thursday, November 18, when the designers collaborate with local accessory designers on a fresh look. Then be sure to sound off in the comments section about your favorite designers on Bravo’s reality TV show, who has the best aesthetic, and who you think will ultimately be crowned the next big name in fashion.

Back in the work studio with Christian Siriano, the designers were concerned when he asked them to “grab a box from the accessory wall.” It could have been any disastrous clue to the next challenge, but they were relieved to discover they were accessories — not too daunting a foundation for their next challenge. Christian explained that they had each grabbed an accessory from a NYC-based designer and that they’d need to collaborate with them to create a brand new look and  accessory for the runway.

The spirit of the challenge was to give back to the small businesses that struggled through the pandemic lockdown, and that created an emotional response in Shantall and the other designers, who were thankful that the show was interested in getting fashion back into business. On top of that, this week’s winner would win $25,000 (along with their partner) to kick-start their own businesses.

For the brainstorming sessions, the accessories designers joined the fray and shared their perspectives on their hats, bags, shoes, gloves and jewelry that would serve as the inspiration for the designs. Both Bones and Katie were inspired by instant connections with their partners, but no one was more connected than Zayden who matched his partner’s interest in representation of indigenous cultures in their designs, and Prajje who grew up on a farm just like his partner did.

At Mood, Christian had a lot of opinions on the fabric choices of some of the designers. He warned Coral against using black again, pointing out that she’s always safe and so she needed to be bolder in her selections. At the same time he was pushing Coral toward more color, he was also questioning Kristina’s choice of neon green. After they spent their $400 at Mood, Christian also sent them to Hai Trim specialty shop with $250 more to pick up gems and other trimmings.

Back in the workroom, Aaron began his concept to have a dress that drops away to reveal a white bathing suit, a garment he was hoping would surprise the judges. Anna, safe with immunity, was more interested in the collaboration aspect of the challenge, so she and her partner conceptualized a halter gown that would strap into a choker necklace. Happy with her choice of red fabric, Coral’s good spirits moved into broken territory when she went to sew the lace and kept breaking needles on the machine. That forced her to have to go the more time-consuming route of sewing by hand.

During Christian’s walk-through, he was hopeful that Coral was headed in the right direction with her red fabric and that Katie was finally listening to her own voice by way of using the fabric she brought from home for this challenge. Model fittings seemed promising for Octavio who was using a whole 20 yards of fabric, Kristina’s neon suit, and Aaron’s “surprising” swimsuit.

With five more hours to finish up their looks and prepping their models for the runway, the designers met up with their collab partners to see the accessories they finished for the look. Most of them were elated with the results, but Coral was worried that the red of the hat was too dark for the red of her dress and that they might clash. They were also pushing the limit with the hand-stitched work on the dress as they went to dress the model minutes before the runway, but luckily it didn’t rip.

After scoring the looks, Brandon announced that Aaron, Chasity, Anna and Shantall were all safe, leaving the rest of the designers on stage to hear critiques. The first of which was one of their favorites, Prajje’s dress that was inspired by his grandmother. Elaine said she got chills from his look and that it made her happy. Zayden’s was on the bottom because Brandon couldn’t figure out what the accessory actually was because they styled with oversized earrings and a dress that overpowered the bag. Elaine said the dress itself doesn’t deserve to be in the bottom, but the styling was his downfall. Coral was surprised to see hers score on the top and elated to hear from Nina that after weeks of being safe she finally got to tell Coral how much she loves the macrame work she does in her garments.

The next low score was for Bones who defended his look despite the judges finding it unflattering and upstaging the hat that should be the focus. Brandon had to explain that it seems like Bones isn’t matching his perspective and voice with his designs in a way that marries them. Also in the bottom was Katie, mostly for her fabric choice, which was one of her own creation. Steven found it not fully thought out and Nina thought the choice of hem length was wrong. Kristina was a high scorer with her neon suit that was layered and “runway ready” according to Nina. Last, Octavio was also a high scorer for creating something that was “larger than life” and a “runway moment” according to Brandon.

When it came time to announce the winner, Nina noted that they “brought the best out of their accessory” and created a cohesive and contemporary look. That designer and partner were Kristina and Lauren! From the bottom of Bones, Katie and Zayden, the panel decided that Katie continued to fail to listen to her own voice and that her look tonight “embodied that confusion,” so they had to send her home. Once again, Christian agreed with the judges and did not use his save to veto Katie’s elimination.

NEXT WEEK: Faux fur serves as the foundation for an avant- grade challenge featuring Billy Porter as guest judge.