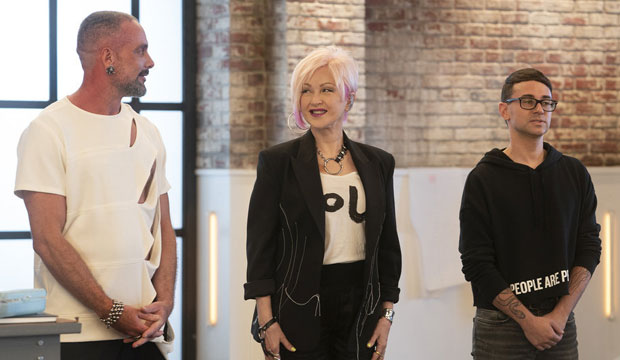 Last week in the seventh episode of “Project Runway” season 19, the 10 designers worked in pairs yet again to use faux fur in an avant-garde challenge. While Bones Jones and Aaron Michael Steach struggled to find a unified approach to building out an oversized fur collar, Shantall Lacayo was faced with the prospect of falling into the bottom with a partner holding immunity. Sure enough, she and Kristina Kharlashkina were the judges’ least favorite, meaning Shantall was eliminated. Luckily, Christian Siriano still had his save to use and decided to spare Shantall, keeping her in the competition.

Below, read our “Project Runway” recap of season 19, episode 8, titled “Couch Couture,” to find out what happened Thursday, December 9, when the designers looked back at a 2020 in lockdown and looked forward by translating loungewear into something chic and fashionable in 2021. Then be sure to sound off in the comments section about your favorite designers on Bravo’s reality TV show, who has the best aesthetic, and who you think will ultimately be crowned the next big name in fashion.

As a tease to their next challenge, the designers were greeted at the catwalk by a “2020 Fashion Retrospective” runway of models in the loungewear “couch clothes” that became so popular during the pandemic. Christian explained that as hideous as they can be, we also like them and so for this challenge the designers should create upscale, comfortable looks that are both luxurious and cozy, but can also be worn out on the town. The designers were given one day to complete the look and told that there would be no more immunity offered to the winner.

Later at Mood, Christian gave the designers $400 each and advised them to think hard about fabrics, because when it comes to comfort that is the most important decision. The biggest risk-takers in their choices were Coral who picked up sequins and Octavio who went straight to the brocade section. Zayden was overwhelmed by all the choices and took it down to the last minute to pick what he was happy with.

Because it was a one day challenge, Christian stopped by soon into their process to check-in on their visions and progress. He liked Kristina’s multiple prints, but it was hard for anyone to see what she was envisioning because the fabric was just draped over her mannequin. Christian was confused by Octavio’s choice of brocade for an oversized sweatshirt idea and tried to sway him toward using his quilted fabric from home that looked cozier. Octavio insisted that he didn’t want to use basic fabric for what would be a basic garment.

When Christian got to Zayden’s station full of fabrics he managed to talk him out of doing a dress and to consider a bomber jacket instead. He then had to question Coral on why she was making a sequin top that looked like a club outfit, stressing that she needs to find a way to soften it up.

Before Christian brought the models in for their fittings, he welcomed Cyndi Lauper and season 18 winner Geoffrey Mac into the workroom. After winning the Cyndi Lauper challenge last season, Geoffrey went on to design more garments for the pop star and so the experience they could both express as they walked around during the fitting was invaluable. Geoffrey warns Octavio that he keeps trying to add stuff to his look because he’s insecure that his first idea was good enough. Bones also had doubts and Cyndi confirmed them when she said he had two different outfits competing with each other because of the loud pant against the dusty rose top.

Because of Cyndi’s criticism, Bones considered ditching the pant entirely to pivot to a short. Chasity said that because he doesn’t have enough fabric to create a new pant he could try a tuxedo stripe, but Prajje gave him a different idea that solved his problem so that he could use the dusty rose fabric for a pant. Looking around the room himself, Prajje was confused by how many different approaches the group was taking with the challenge. He said it looked like some were going to weddings, some were going to strip clubs and others were headed out for another liquor store run.

The stark differences in the looks was very apparent the next morning before the runway when Christian came by for last looks. While Bones had managed to finish and be happy with his new pant, Zayden was struggling with fit on his own, Coral had stuck to her full sequin pant and top, and Christian thought Aaron’s look was for grandma sitting on the couch watching her stories. The grandma comment made Aaron switch it up last-minute to a bralette for the top to bring some youth to it. Christian was also unhappy with Octavio’s decision to pair his sweatshirt dress with a pink-feathered pump and Anna’s late-game stitching to clean up all the loose threads on her look.

On the runway, Nina Garcia, Elaine Welteroth and Brandon Maxwell were joined by designer and guest judge Maria Cornejo. After the looks were shown and the scores were tallied, the judges acknowledged that the variety of looks would likely engender a variety of opinions during the critiques. Shantall, Anna, and Bones were all safe and spared the stress of having to wait to hear those critiques. The first highest score of the night was for Chasity’s all-white harem pant and top that was inspired by R&B music artists. Nina liked that it’s a different look than she’s shown to them before and Maria thought the model looked like she was really feeling comfortable in it. Next was Aaron’s cashmere pant and wool shirt with the bralette because of its femininity and versatility as multiple pieces, but Elaine thought it was too frumpy and not chic enough. Kristina’s multi-print draped look was considered “hot hippie” by Maria and Elaine thought every element was executed perfectly, but Brandon differed from the rest of the panel because it felt costumey.

On the low side was Octavio’s genderless sweatshirt with lingerie underneath. While the judges liked the sweatshirt, it was not styled well and Brandon thought that there would be something more to it and so was left disappointed. Prajje was also on the bottom because there was no spirit in the look and for a designer that had used such style and color in past challenges this, too, was a disappointment. Elaine presented a dissenting opinion, loving the print that he chose and the way it represented an uptown girl. Coral’s sequin look, which Brandon called “not terrible,” was just not appropriate for the prompt of the challenge. Nina said she went too far into the luxe side of the prompt and was not close enough to the concept of comfort. Zayden was the fourth designer on the bottom for his bomber jacket and knitted neoprene pantsuit. With the puckering in the top, the bunched pant leg and the purse, it was too much look going on and Brandon thought she looked like she was going skiing.

Because of their wildly differing opinions on both the tops and the bottoms, the judges had to lively debate in order to reach a consensus. In the end, their winner was Kristina for showing versatility, innovation and style. With four on the bottom, Brandon explained that none of them executed on every aspect of the challenge, but Coral and Prajje were the least guilty of it, so they were declared safe. Between the remaining two, the judges felt that Octavio’s look was over-styled and lacked originality while Zayden’s fit and execution was off. And because neither of them rose to the challenge they were both out.

NEXT TIME: In an unconventional materials challenges, the eight designers are asked to make a cocktail dress using anything they can find in a cocktail bar.