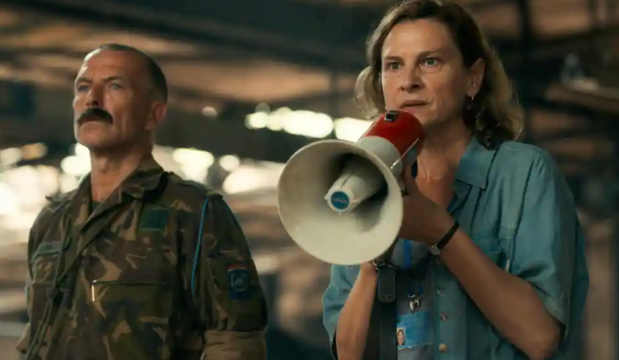 The Best International Feature category at this year’s Oscars isn’t getting a lot of attention. The Danish entry, “Another Round,” is well-positioned in our odds to take the prize, but it’s possible that the movie might not be as safe a bet as we think. That would be very good news for Bosnia and Herzegovina’s submission in the race, “Quo Vadis, Aida?”

“Another Round” hasn’t picked up a lot of the wins that we would expect of a film easily waltzing to a victory here. At the Golden Globes and at Critics Choice, the movie had to compete in the Best International Film category with the American-made “Minari,” which claimed both of those prizes.

“Another Round,” did manage to beat out “Minari” at BAFTA, but this highlights another possible weakness for the film. At BAFTA, the film had also scored nominations for Directing (Thomas Vinterberg), Actor (Mads Mikkelsen) and Original Screenplay. At the Oscars, it’s only other nomination is for Directing. While that does show that there was love for the movie outside of International Feature, it was concentrated within the several hundred people who make up the director’s branch of the Academy. It didn’t extend to the writer’s branch or the actor’s branch, the latter of which is the academy’s largest.

So, why would “Quo Vadis, Aida?” be the natural beneficiary if “Another Round” falters? Directed by Jasmila Žbanić, the film has the importance and gravitas that we expect from a winner in this category. “Quo Vadis, Aida?” examines one of the worst incidents of the Bosnian War (the massacre at Srebrenica) from the point-of-view of a U.N. translator (Jasna Đuričić) who is seeking to ensure the safety of her husband and two sons from the Serbian military. It’s intense, gripping and even horrifying but in a way that you’re unable to look away from, very much in the same way as another recent winner here, “Son of Saul,” from Hungary.

This also brings up the memory of the last time Bosnia and Herzegovina won this category 19 years ago. Danis Tanović’s “No Man’s Land” had won several precursors including the Golden Globe, but was facing off at the Oscars against Jean-Pierre Jeunet‘s “Amélie” from France which had five additional nominations including Original Screenplay. Even with the love “Amélie” received from several branches, “No Man’s Land” was able to come out victorious for Best Foreign Language Film (as it was then known).

One caveat: prior to 2013, voters wishing to vote for had to physically attend screenings of the nominated films and only once they had done that would they be allowed to vote in the category. This factor may have helped Germany’s, “The Lives of Others,” triumph over “Pan’s Labyrinth” from Mexico in 2006 even though the latter also had five other nominations and would win three awards that night.

All academy voters are now allowed to vote on International Feature and are on the honor system that they’ve watched all the nominated films.