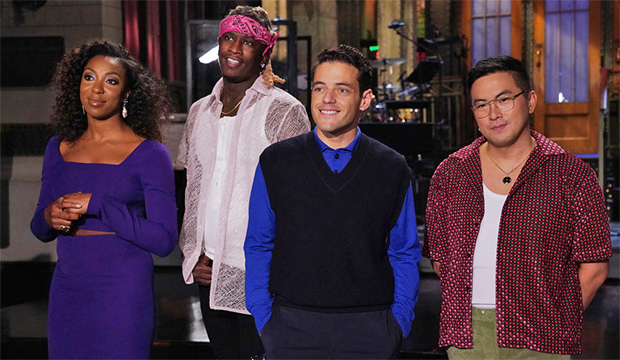 Rami Malek hosted the October 16 episode of “Saturday Night Live” with musical guest Young Thug. This was Malek’s hosting debut on the NBC sketch series, while Young Thug appeared as a special guest for one of Megan Thee Stallion‘s performances last season. For Malek’s opening monologue, the “No Time to Die” star spoke about how he’s played a lot of dramatic roles, so “SNL” would be a change of pace. He added that people say he has “resting villain face,” which is why he is so well-suited to play a Bond villain.

Malek went on to explain that he often sympathized with villains in other movies, such as Scar in “The Lion King” or Hannibal Lecter in “The Silence of the Lambs.” Going further on Hannibal, he quipped that from Malek’s perspective, Clarice was always bothering Hannibal with all those questions.

He discussed some classic villains he also loved, such as Jaws, Dracula and Frankenstein’s monster. Malek got big laughs when he said Freddie Kreuger was simply “encouraging kids to dream.”

The actor then talked about his childhood, which he described as “sheltered.” He mentioned having a twin brother, who he teased would be swapping with him in one of the night’s sketches. Malek finished his monologue by noting that he’s proud of his brother, a teacher, and his sister, a doctor, for devoting their lives to helping others, but let’s be honest, he’s the one with an Oscar.

“No Time to Die” is one of Malek’s most notable roles since winning an Oscar for “Bohemian Rhapsody” in 2019. Earlier this year, the actor also starred with fellow Oscar winners Denzel Washington and Jared Leto in “The Little Things.” “SNL” has spoofed Malek twice in recent years, both times by Pete Davidson.