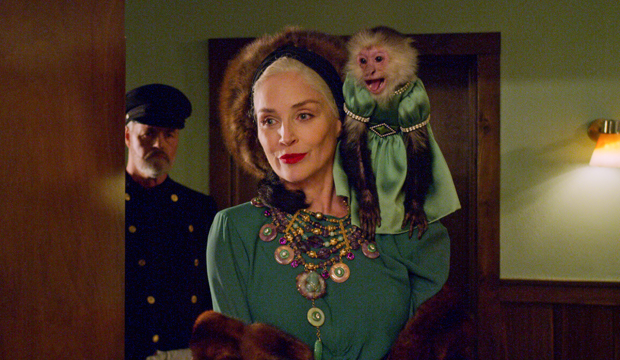 Forget Sarah Paulson. The real star of Netflix’s “Ratched” is Petunia the Monkey.

This furry, banana-eating thespian exploded on social media last September when she appeared alongside her human-sized co-star Sharon Stone in Ryan Murphy‘s “One Flew Over the Cuckoo’s Nest” adaptation. Fans weren’t just impressed with Petunia’s acting chops, but also her colorful wardrobe, which consisted of several dazzling looks. “This was my first time designing for a monkey and working with one,” reveals costume designer Rebecca Guzzi during our recent interview (watch below). “Miss Petunia had five changes overall and believe me, if we could have made 100 for her, we would have.”

Stone played Lenore Osgood throughout the first season, a spoiled heiress who stopped at nothing to make sure Dr. Hanover (Jon Jon Briones) paid the ultimate price for disfiguring her son, Henry (Brandon Flynn). Petunia appeared in many of Stone’s scenes, often ooh-oohing and ah-ahing on her shoulder as the other characters looked on in confusion.

The simian also got to cuddle with the show’s leading lady Paulson, aka Nurse Mildred Ratched, during her off-time:

Sarah Paulson with a little monkey. That’s it. That’s the tweet.✨ #Ratched pic.twitter.com/HZjWSC2Dl0

“We loved coordinating what Miss Petunia was gonna wear once we had what Sharon was gonna wear in a scene,” Guzzi tells me, “so they kind of appeared as this mother-daughter dress-up duo.” Indeed, the characters were so close that at the end of the season, after tragedy struck the Osgood family, Petunia was declared the new owner of the estate, much to Henry’s bewilderment.

When I ask Guzzi if Petunia had more costume changes than Finn Wittock‘s white T-shirt-wearing Edmund Tolleson, she laughs and concedes, “I think that’s an accurate observation.” Edmund is someone that can never “really break free of his past,” Guzzi says about the show’s villain. “He’s just that Marlon Brando bad boy, T-shirt rolled-up sleeves, cigarette in the pocket, lived-in pleated trousers or jeans, and that’s who he is.”

The costumes and sets of the Netflix series are bright, lively and full of life, a direct contrast with the 1975 film that inspired it. Guzzi explains, “Ryan from the first meeting was very adamant that he did not want what was featured so prominently in ‘Cuckoo’s Nest’ — this really bleached, institutionalized, void of any color palette, both in the costumes and the sets. We are gonna lead up to that, but we don’t want to start there.”

As you’d expect, Guzzi and fellow costume designer Lou Eyrich had many discussions about the now-iconic nurse’s scrubs. “We scratched our heads and said, how could a nurse do her job in a non-white-colored dress? It needs to be sterile, it needs to look the part,” she notes. After doing research and initial renderings, they ultimately decided on the “perfect blue-green that would look great against a lot of different skin tones.”