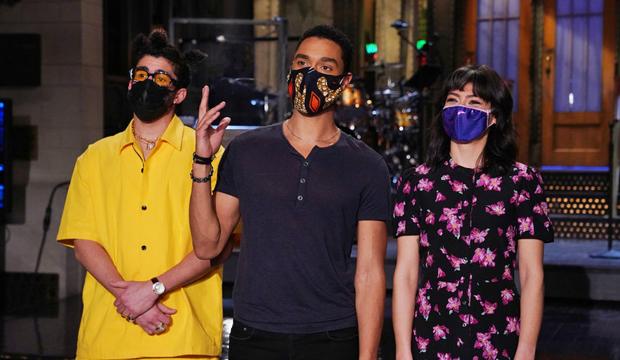 Rege-Jean Page hosted the Feb. 20 episode of “Saturday Night Live,” with musical guest Bad Bunny. The actor had a huge breakout year thanks to “Bridgerton,” the buzzy new Netflix drama produced by Shonda Rhimes in which he plays the dashing Duke of Hastings Simon Basset. “SNL” made quick work of booking him as their latest host, considering the first season of “Bridgerton” dropped less than two months ago.

For his opening “SNL” monologue, Page tried his best to assure the audience he was just a regular guy, not the dreamy duke featured in the show. Yet, the actor could not help but send smoldering looks to the camera and tell us he was “here to show you a good time.” He was soon joined by cast members Aidy Bryant and Ego Nwodim who all hoped to assist him in any way they could. As they fawned over the actor, he admitted he’s been getting a lot of this energy lately.

Taking things to a new level was Chloe Fineman, who dressed as Daphne Bridgerton herself. Page sent all three cast members over the edge by passionately stating, “I burn for you.” He then spoke more seriously about how he’s happy “Bridgerton” has connected with so many people, “especially people who don’t normally get to see themselves as romantic leads on television.”

Page was nominated in two categories at the Screen Actors Guild Awards earlier this month — one for Best Male Drama Actor and another as part of the cast of “Bridgerton” in Best Drama Ensemble. This was somewhat of a surprise considering the SAG Awards aren’t always quick on the draw when it comes to rewarding hot new shows but it speaks to the popularity of the Netflix series and the impression left by Page. The show was strangely left out of the Golden Globe nominations.