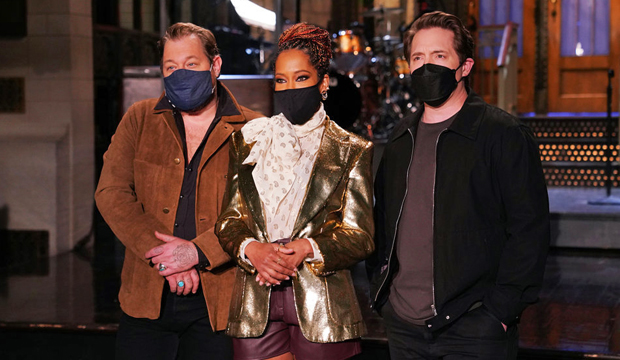 Regina King hosted the Valentine’s Day episode of “Saturday Night Live,” with musical guest Nathaniel Rateliff. It was the rare instance of a host promoting their directorial effort — in this case, her feature directorial debut, “One Night in Miami.” For her opening monologue, King spoke of how she grew up watching Eddie Murphy on the NBC sketch series, but quipped that she mostly lost interest after he left in 1984. (Murphy won an Emmy last year for returning to the show as a guest host.)

King discussed how Black people and white people tend to know her for different things. “If you’re Black, you probably know me from being in some of your favorite movies,” she observed. “If you’re white, you probably know me from ‘Watchmen,’ or this monologue right now.” She joked about asking “SNL” showrunner Lorne Michaels what to do if she gets nervous. His advice: “‘Don’t panic, when in doubt play the race card,’ then he did a little shoulder shimmy and moonwalked out of my dressing room.”

Cast member Kenan Thompson then came out and acted as King’s hype man, letting the audience know just how much of a queen she is. This included telling an audience member he wasn’t clapping hard enough for King, considering she had won an Oscar. King also joked that “One Night in Miami” is about a night when Uncle Luke, Rick Ross, Trick Daddy and Pitbull ate dinner at a Waffle House together.

King’s hosting stint comes after receiving a Golden Globe nomination for directing “One Night in Miami.” It was the latest in a long line of nominations and wins for King, having received her fourth Emmy last summer for “Watchmen” and an Oscar two years ago for “If Beale Street Could Talk.” Should she earn a Best Director nomination at the Oscars for “One Night in Miami,” she would be the first Black woman to do so.