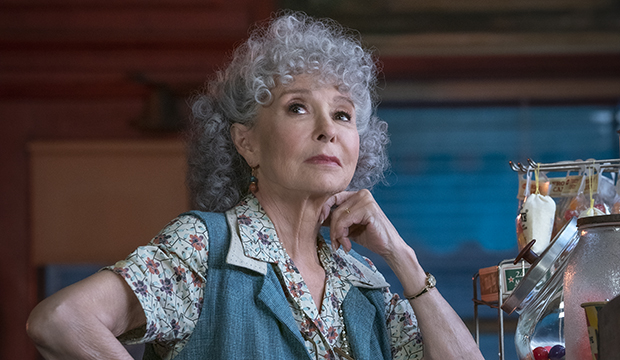 Rita Moreno is one of a select few in Hollywood who have achieved the exceptionally rare honor of winning the EGOT. But the legendary actress, who turns 90 on Dec. 11, isn’t done yet. After playing the scene-stealing Lydia on Netflix and Pop TV’s “One Day at a Time” for four seasons, she’s back on the big screen and could join the history books (again) in the very near future.

Moreno, who won the Academy Award for Best Supporting Actress for her performance as Anita in the 1961 film adaptation of the 1957 Broadway musical “West Side Story,” could take home the same award for playing a different character in Steven Spielberg’s adaptation of the musical, which is set to hit theaters Dec. 10. In the new movie, Moreno plays Valentina, a reimagined version of the Doc character, who owned the corner store in which Tony worked and was played by Ned Glass in the original film. In this version, Valentina is Doc’s widow and has an expanded role that was written for her by the film’s screenwriter, the Pulitzer Prize-winning playwright Tony Kushher.

Currently, Moreno — who is also an executive producer on “West Side Story” and sings a version of the classic song “Somewhere” — sits in eighth place in Gold Derby’s combined odds at 25/1. Kirsten Dunst (“The Power of the Dog”) still leads the category with 4/1 odds, while Aunjanue Ellis (“King Richard”) is in second place, Caitriona Balfe (“Belfast”) sits in third and Ann Dowd (“Mass”) is in fourth. Ariana DeBose (“West Side Story”), who steps into Moreno’s very large shoes and makes Anita her own, is comfortably in fifth place after surging in the odds following the film’s recent premiere. Marlee Matlin (“CODA”) and Ruth Negga (“Passing”) sit just outside the top five, in sixth and seventh place, respectively.

Should Moreno manage to score a Best Supporting Actress nomination, she’ll become the oldest nominee in Oscar history, surpassing Christopher Plummer, who was 88 when he was nominated for “All the Money in the World” (2017). And should she win come March, she’ll also be just the third woman in history to take home two supporting actress Oscars (and the first to do it for playing two different roles in what is technically the same movie).

The first woman to win two supporting Oscars was Shelley Winters, who won her first award for her performance in “The Diary of Anne Frank” (1959), two years before Moreno would win for playing Anita. She took home her second supporting actress Oscar for “A Patch of Blue” (1965). The second woman to earn a set of bookends was Dianne Wiest, who won for her performances in “Hannah and Her Sisters” (1986) and “Bullets Over Broadway” (1994).

As it stands, Moreno has a little work to do if she hopes to join Winters and Wiest. While she probably won’t be changing her name to Rita Woreno in an attempt to increase her odds, there is little reason to think she won’t receive plenty of support once the film opens in theaters and more people are able to see it. Early reviews have already praised her performance, as well as the quality of the film overall, which obviously works in her favor. She’s also well liked and has the distinction of being in one of the final films to open this year, which means she’ll be at the forefront of voters’ minds when it comes time for nominations. There are a number of talented women currently ahead of her, of course, and she’ll likely have to defeat her own co-star in DeBose, but Moreno is an EGOT winner for a reason. Plus, if anyone is going to surpass the new Anita, it’s probably the person who already won an Academy Award for the role.