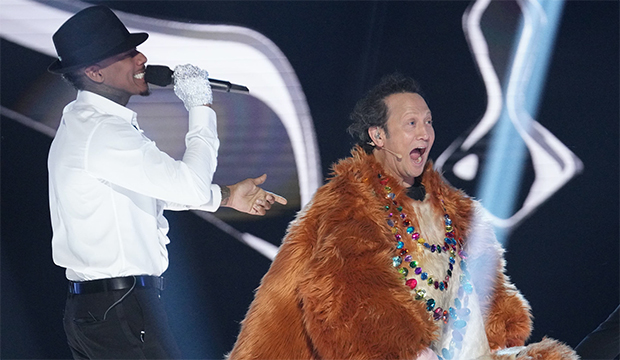 The Group A performers on “The Masked Singer” went back in time for Wednesday night’s “Time Warp” episode, with the Hamster being unmasked following his performance of “Sabor a Mí” by Luis Miguel. The furry rodent lost his head in front of America and turned out to be movie star and comedian Rob Schneider.

“It’s hard to compete against a bull who can do the splits,” Rob joked during his unmasked interview with host Nick Cannon. “I saw that and I said, ‘I’m gonna take my nut bag and get out of here.'” The “Saturday Night Live” alum dedicated his performance to his wife Patricia and his daughters Miranda, Madeline and Elle. “I was so nervous and I go, ‘What am I this nervous about?’ I’m dressed as a hamster. You get into it! This is one of the best experiences I’ve ever had.”

While none of the panelists earned any points towards the Golden Ear trophy, Jenny McCarthy was able to name Rob as the Hamster after scratching her first impression guesses of Andy Richter and Jason Alexander. Robin Thicke wrongfully guessed the fur ball was comedian Cheech Marin. Nicole Scherzinger‘s first impression guess was also Jason Alexander, but she changed her mind to Gabriel Iglesias. Ken Jeong thought the singing creature was Bill Murray but eventually landed on Will Ferrell being the Hamster.

Although Jenny was the only panelist to correctly guess the Hamster’s identity, there were plenty of hints in his clue packages pointing towards Rob. Hamster making copies in his package was a clue to Rob’s famous “Saturday Night Live” joke, “Makin’ Copies.” The scepter in his package was a nod to Rob’s daughter, singer Elle King. The recurring water bottle in each of Hamster’s packages was a clue to Rob’s role in “The Waterboy.”

Rob was the fifth performer eliminated from Group A and the seventh overall. His exit was preceded by Dwight Howard as Octopus, Vivica A. Fox as Mother Nature, Toni Braxton as Pufferfish, Tyga as Dalmation, Larry the Cable Guy as Baby and Ruth Pointer as Cupcake. The contestants advancing from Group A are Bull, Jester, Pepper and Skunk. The Group B performers will return on November 3 with an all new wildcard, Beach Ball, bouncing onto the stage to face off against Banana Split, Caterpillar, Mallard and Queen of Hearts.