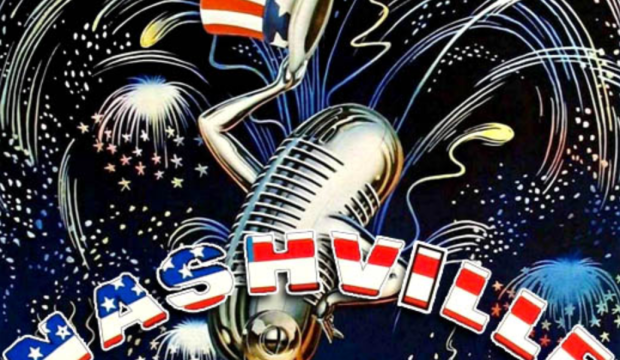 Robert Altman’s 1975 “Nashville” is considered one of the masterpieces of that golden decade of cinema and arguably the maverick filmmaker’s masterwork. The sprawling comedy-drama received stellar reviews, was nominated for five Oscars including Best Picture and Best Director, winning Best Original Song for Keith Carradine’s “I’m Easy” and won several critics’ honors.

But one group that didn’t like the movie was Nashville’s country-music crowd. Henry Gibson, who received a Golden Globe nomination for his glowing performance as egotistical country music star Haven Hamilton, told me in a 2000 L.A. Times interview on the movie, that the legendary Minnie Pearl “was outraged. I remember on opening night, someone asked her how she would rate the picture and she said, ‘I give it two closed nostrils.’”

“Nashville,” which Paramount Home Entertainment recently released on a remastered Blu-ray in a stunning 4K scan of the original elements, covers five-days in the lives of 24 people leading up to a presidential political rally of an outsider named Hal Philip Walker. The Replacement Party’s candidate is never seen in the movie but is heard as his campaign truck blasts his populistic rhetoric throughout the city.

The film was penned by Joan Tewkesbury (“Thieves Like Us”) with Altman improvising scenes and storylines during production. And a lot of the actors such as Carradine wrote the songs they perform. “Nashville” is populated by members of Altman’s stock company of actors, as well as several newcomers including:

Singer Ronee Blakely was nominated at the Oscars for her featured performance as Barbara Jean. The emotionally fragile Loretta Lynn-esque singer is just returning to the stage after suffering burns in a fire. Allen Garfield portrays her husband/manager who is worried about her health and mental state.

Lily Tomlin, in her Oscar-nominated film debut, plays Linnea Reese, a gospel singer with two deaf children married to a slick attorney (Ned Beatty), who is Haven Hamilton’s attorney and organizer for the Walker campaign.

Carradine plays Tom Frank, a member of a folk-rock trio, who wants to break free from the group and has a one-night stand with Linnea.

Gwen Welles is the naïve and talentless waitress Sueleen Gay, who dreams of stardom as a singer.

And Barbara Harris is Winifred, an aspiring singer/songwriter who has run away from her husband (Bert Remsen). She finally gets her chance to give a galvanizing performance when tragedy strikes at the rally.

Altman looked back wistfully at “Nashville” and his 1970 blockbuster “MASH” during our 2000 interview, admitting the 1970s was the last great decade of filmmaking. “They are making these toy films,” he lamented. “They are appealing to the 13-year-olds straight across. And they don’t even do them well. There is no reason why this recent Tom Cruise film ‘Mission: Impossible 2’ can’t be good as well as have all of the action they need.”

Referring to the groundbreaking 1969 “Easy Rider,” Tewkesbury added, “that era of filmmaking came in on a motorcycle and it walked out in a business suit. It is just shocking.” “’Nashville,” she said, “was a soap opera on a road map. You couldn’t get away with that today. With all the people who have to have their hands in the pie, you couldn’t do it.”

A year after this interview, Altman did do it. He had extraordinary success with a multi-cast storyline drama “Gosford Park,” which was nominated for seven Oscars and won for Julian Fellowes’ screenplay. Though Paul Thomas Anderson had already made his Altman-esque flms, 1997’s Boogie Nights” and 1999’s “Magnolia,” Altman didn’t think he had influenced any indie filmmakers. “The only guy who really keeps drawing attention to it is Anderson,” Altman noted. “He says, ‘I am just ripping Altman off.’” (Anderson was hired to be the backup director on Altman’s last film, 2006’s “Prairie Home Companion” because the director was ailing.)

Tewkesbury was in Mississippi working with Altman on “Thieves like Us,” when the director asked her to go Nashville and keep a diary of what she observed. “I went the first time, and it was strange because all I got was a tour of all the museums,” she confessed. “They wanted to show you Patsy Cline’s hairpins and talk about the religious aspects of what good people they all were. I knew damn good and well they were all popping pills and trying to make their next gig on time.”

So, she went back to Nashville without any tour guides. A lot of what she saw ended up in the film like the talent show in the center of a stock car race track where Winifred performs. She was told to visit the Exit/In, which appears in the film, after chatting with recording engineers. She brought a yellow legal pad and sat at the back of the club where she witnessed a girl OD-ing at the table in front of her. “And this black man came, sat down and shoved a joint up my sleeve and said he had just gotten out of jail after 26 years for pre-mediated murder.” She realized exiting the Exit/In that the movie was “about all of these things. The movie became this construct of people going after fame simultaneously, and if not fame, everybody was in search of some sort of dream.”

Sueleen Gay, though, was based on someone Tewksbury knew when she was doing nightclub work in San Francisco.  “Her character sort of epitomized that if you want it badly enough, you’ll pretend that you don’t know what the rules are. To me, that’s truly the metaphor of the movie.”

Shot for $2.2 million, “Nashville” made $10 million. It was No. 27 on the box office chart that year. “Jaws’ was No. 1 making $260 million domestically. “All the actors paid $1,000 a week were the known ones,” Altman offered. “The others were paid $750. They were there all the time.” The only exception was Karen Black who played Barbara Jean’s rival, Connie White. She was only there for a week.

The extensive cast arrived in Nashville 10 days before production began to have parties and read-throughs. “They were mainly to get everyone comfortable with everyone else,” said Altman. “A majority of my films are a result of improvisation. I don’t mean improvisation while we were shooting, but in rehearsal period.” Altman described his films as his children. “They become part of your life,” he said. “There is not a film out there I don’t adore.”