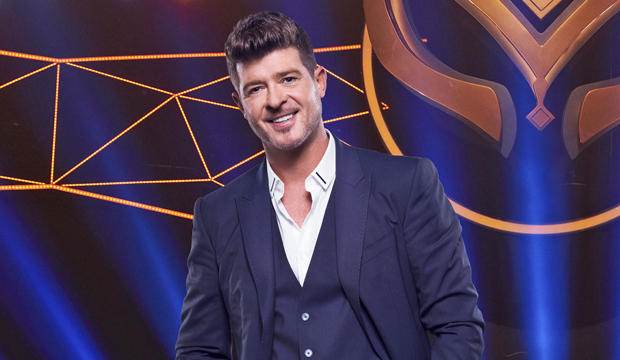 Wednesday’s sixth episode of “The Masked Singer” had everyone reaching for the tissues as panelist Robin Thicke teared up remembering his late father, beloved Canadian actor Alan Thicke. Robin’s dad, who was perhaps best known for his sitcom role on “Growing Pains,” passed away in 2016 at the age of 69 after collapsing while playing ice hockey.

The tears flowed following the Orca’s performance of Poison‘s “Every Rose Has Its Thorn” midway through the Fox reality TV episode. The blue whale dedicated the song to his own father, who died shortly after Orca became a dad for the first time. Host Nick Cannon called the performance “powerful and emotional,” and the judges agreed.

SEE Crab evacuates ‘The Masked Singer’ stage after nearly passing out in costume: ‘I can’t breathe’

“You know, I lost my father a few years ago,” Robin shared. “He was my hero and my idol. And so I totally connect with your story. I feel what you’re trying to say with that song. It’s really heartfelt and a beautiful, beautiful performance.”

The Orca grabbed the microphone and responded to the superstar judge with an altered voice so his identity wouldn’t be revealed. “Robin, I just really appreciate your words,” he began. “I chose this song as a celebration of my dad, and now I’m a dad of 10-year-old twins. The last thing I ever thought was I’d be crying in a giant Orca costume. That was for my Pops, man. I miss him.”

The panelists weighed all of Orca’s clues, including a T-shirt with the word “PURRRR,” and threw out famous names like Fred Durst, Billie Joe Armstrong and Jeremy Renner. “Whoever you are, we could feel your heart with this,” added Ken Jeong. “It was just so good, so good.”

Orca later unmasked to reveal music star Mark McGrath, the frontman for the band Sugar Ray. McGrath’s fellow Group A competitors on Wednesday night were Robopine, Russian Dolls, Seashell and Yeti. These four advanced based on the audience vote, and they’ll now join up with the Group B finalists (Black Swan, Chameleon, Crab and Piglet) in next week’s all-important Super 8.