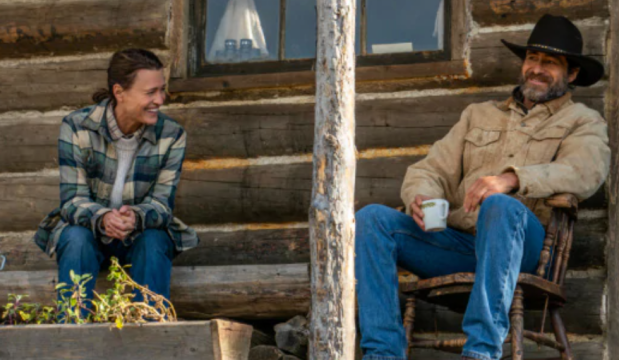 If you end up shooting a movie in the wilds of Canada, it’s always good to have a bear whisperer on set. Robin Wright, who stars and makes her feature directorial debut with the intimate drama “Land,” had such an expert on location 24/7. “We had our set bear,” she recalled during a recent Variety Zoom conversation with the publication’s Jenelle Riley and Wright’s co-star Demian Bichir.

“He showed up every day. He got a hamburger on the craft service table and he decided to come back to McDonald’s drive-through every day. When we would wrap, we would go to our trailers and he would come with us. We would barbecue our food and then he was like ‘Hey, when you are all done, give me a call. I’ll come over and I’m going to lock you and producer [Allyn Stewart] into your trailers because the bears will open your trailer at night. And then we won’t have a director of the movie. “’

Bichir remembered when his eyes met the animal’s. The bear whisperer asked him one day him if he wanted to see the bear. “He was, like, keeping the bear away, making sure that he wouldn’t come any closer and that’s when we had that encounter, a close encounter of the first kind.  It’s really beautiful when you lock eyes with the animal. That’s a really powerful thing I have never felt before only with my dog. “

“Land,” which Focus Features premiered at this year’s virtual Sundance Film Festival, revolves around Edee, a woman who has recently lost her son and husband to gun violence, who is so filled with grief that she’s near suicidal. She decides the only thing she can do is escape from the world. Though she has no knowledge how to take care of herself in the wilderness, Edee rents a remote cabin. She gets rid of her phone, computer and car. She’s nearly at death’s door when she is found and nursed back to health by Miguel (Bichir), a kind hunter with a penchant for ‘80s pop tunes, and a nurse (Sarah Dawn Pledge). Critics have singled out the performances. Chicago Sun Times’ Richard Roper stated that “Wright delivers the latest in a long line of finely nuanced performances as Edee.”

Wright had directed short films and directed episode of her Netflix series “House of Cards” with the plan to move into directing features. She had been receiving feature scripts as possibilities to direct when Jesse Chatham and Erin Dignam’s “Land” arrived. “This one just resonated,” Wright explained. “I think it was the timing. It was when the world was experiencing these random shootings that we were going on. I just woke up every morning going ‘How do these people get through the trauma and grief?’ I really wanted to share this message because the end of the movie is about the light on the other side of the tunnel. We need each other to get through difficult times.”

She never intended, though, to play Edee. “We got financed very quickly and just had this very slim window in which we had to get it cast, pack our bags, go to Canada and start prepping. We shot the movie in 29 days and we needed to capture four seasons in that amount of time. The producers just said ‘I don’t think we can take the risk waiting…and the maybe it doesn’t get cast. Because of scheduling conflicts with other actors, the producer just said, ‘I think you’re going to have to do it.”’

Bechir, a Best Actor Oscar nominee for 2011’s “A Better Life” who just won an AARP Movies for Grownups Award for supporting actor for “Land,” was looking to do a “beautiful story” with a juicy character to play. “Land” fit the bill. “I saw a beautiful character that it offered me the opportunity to explore different things that I hadn’t tried before as an actor in any other film. So, to find a package such as this, it’s so rare to happen in that lifetime.”

The chemistry between the actors on-screen also carried over offscreen. Wright recalls the first time she met the actor at her house, she felt like she had reunited with her “long-lost brother,” adding she told him ‘I need you to do this part.” Before filming began, Wright and Bechir were trained by a real mountain man “how to survive out there because he actually lives there in the mountains with his family,” the actor said. “Everything that has to do with hunting is not only a matter of survival, it’s not just for you and your family to be able to eat, it’s also a communion type of thing that you merge with a mountain and that you have to be respectful. You have actually to thank the deer you’re hunting for offering his life for you and your family to be fed.”