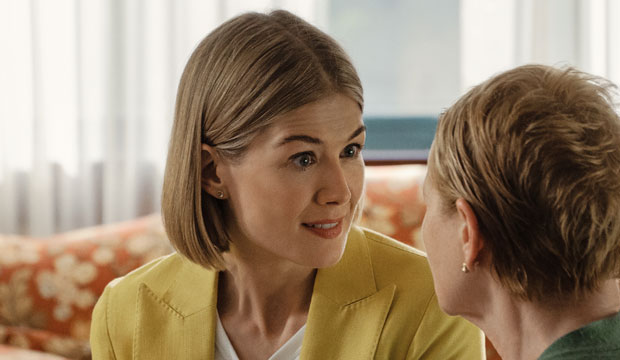 At this year’s Golden Globe Awards, Rosamund Pike pulled off a surprise win for Best Comedy/Musical Actress for her performance in “I Care a Lot” as a court-appointed guardian for the elderly who’s actually seizing their assets for herself. She was second place in our odds while most of our Experts were predicting Maria Bakalova to come out victorious for “Borat Subsequent Moviefilm.” With Pike succeeding there contrary to our expectations, could she be a dark horse for a Best Actress Oscar nomination next?

According to the combined odds of Gold Derby users, the five expected to receive a Best Actress nomination at this year’s Oscars are currently Carey Mulligan (“Promising Young Woman”), Viola Davis (“Ma Rainey’s Black Bottom”), Frances McDormand (“Nomadland”), Vanessa Kirby (“Pieces of a Woman”), and Andra Day (“The United States vs. Billie Holliday”), with Mulligan favored to win as of this writing. Pike’s odds were previously at 100/1 before the Golden Globes. But after she won, they improved significantly, now placing her seventh with 58/1 odds behind Zendaya for “Malcolm and Marie.”

While winning the Golden Globe for Best Comedy/Musical Actress didn’t help Awkwafina go on to receive a Best Actress Oscar nom last year for “The Farewell,” keep in mind that last season was very truncated since the Oscars moved up to early February. With so many events crammed closer together, Oscar nomination voting ended just two days after the Globes. This year, voting for Oscar nominations began five days after the Globes. That gives academy members more time to catch up on “I Care a Lot.” And Pike’s Golden Globe victory is not only fresh in people’s minds, but so is the film itself as it was released very recently (February 19), so it might be one of the last movies voters see before they mark their ballots, giving her the chance to make a strong last impression.

Since coming into her own as a force to be reckoned with in the industry with her Oscar-nominated performance in 2014’s “Gone Girl,” Rosamund Pike has gone on to give several more critically acclaimed performances in further films such as 2016’s “A United Kingdom,” 2017’s “Hostiles,” 2018’s “A Private War,” and as real-life chemist Marie Currie in “Radioactive” last year. So if academy members feel it’s time for her to make a comeback at the Oscars with a second nomination, now seems like a great opportunity to do so.