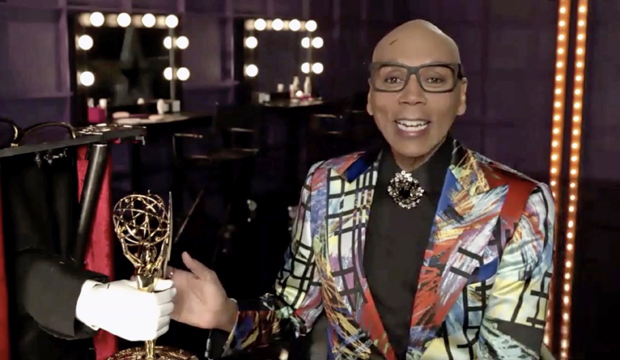 RuPaul Emmy record set! It was no surprise when “RuPaul’s Drag Race” won the Emmy for Best Competition Program on Sunday night, September 19. But it was a landmark moment as this was the 11th total victory for executive producer RuPaul Charles, now making him the single most awarded Black individual in history. Check out the complete list of Emmy winners here.

“Drag Race” won four awards at the Creative Arts Emmys presented last weekend on September 11 and 12. That included the sixth consecutive victory for Charles as Best Reality Host. The series additionally won for its casting, directing, and picture editing, while the spinoff “RuPaul’s Drag Race: Untucked” won its first prize for Best Unstructured Reality Program; since Charles is an executive producer of that series as well, he took home a trophy there too. Combined with the three awards “Drag Race” had previously won for Best Competition Program, that gave Charles 10 career Emmys going into the September 19 prime time ceremony.

SEE‘RuPaul’s Drag Race’ winners list: Every season, plus ‘All Stars’

For a week, Charles was tied as the most awarded Black individual in Emmy history with Donald A. Morgan, a cinematographer known for his work on multi-camera sitcoms and a 10-time winner for his work on “Home Improvement” and “The Ranch.” Morgan had a chance to extend his record to 11 since he had three of the five nominations this year for Best Cinematography for a Multi-Camera Series (for “The Conners,” “Last Man Standing,” and “The Upshaws”), but that award went instead to George Mooradian, a first-time winner for “Country Comfort.”

So Charles’s Best Competition Program win tonight gave him his record-breaking 11th prize, which also helped extend “Drag Race’s” record as the most awarded competition program in Emmy history with 24 wins over the course of its run. That’s a remarkable achievement not just for Black entertainers in media, but also for queer entertainers.