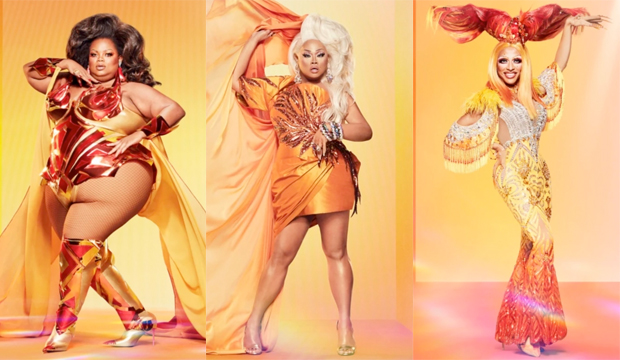 The sixth season of “RuPaul’s Drag Race All Stars” is being teased as a “game within a game,” but what does that actually mean? Hmm. The fact that host RuPaul Charles has told each of the eliminated queens — Silky Nutmeg Ganache, Jiggly Caliente and Serena ChaCha — to stop packing their bags suggests they might not be finished competing quite yet. Perhaps the group at large will get to vote one of their fallen queens back onto the Paramount+ and VH1 reality TV show? If so, which one do you hope returns? Vote in our eliminated queen poll below.

SEE‘RuPaul’s Drag Race All Stars’ 6 episode 3 recap: Which queen fails to get credit for her extra work in ‘Side Hustles’?

On June 24, a whopping 13 former contestants returned to Ru’s iconic runway to try to win a spot in the coveted “Drag Race” hall of fame. After three episodes, only 10 queens still remain in the werk room, all with exactly zero idea about the meaning behind the “game within a game” tease. These Top 10 queens are: A’Keria C. Davenport, Eureka, Ginger Minj, Jan, Kylie Sonique Love, Pandora Boxx, Ra’Jah O’Hara, Scarlet Envy, Trinity K. Bonet and Yara Sofia.

Season 11’s Silky Nutmeg Ganache was eliminated in the third episode after being on the losing team in the “Side Hustles” commercial acting challenge. Silky readily admitted that she didn’t have as many lines as her co-stars, and she ultimately ended up disappearing into the back of the stage. Because of how she came off to fans last time, her goal this season was to not step on anyone’s toes. Unfortunately that strategy seems to have been part of the reason she was eliminated so early.

Season 4’s Jiggly Caliente was sent packing in the second episode, “The Blue Ball,” when she failed to create a garment as memorable or as eye-popping as the others. Jiggly felt out of place in the werk room after seeing her competitors thriving during the unconventional materials challenge. Ultimately, her T-shirt dress with ribbons and fringe was too simple and failed to impress the judges.

Season 5’s Serena ChaCha started out this cycle with a whimper when her jokes failed to garner any laughs during the shade-throwing mini challenge. She was then eliminated at the end of the first episode, “All Star Variety Extravaganza,” after dancing and singing to a song about wigs. While the judges liked Serena’s song, they claimed it didn’t fully live up to its potential on the big stage.

Which eliminated queen from ‘RuPaul’s Drag Race All Stars 6’ do you hope returns?
Created with Poll Maker