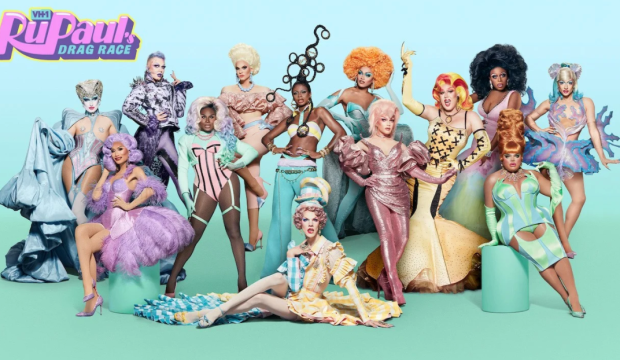 “RuPaul’s Drag Race” fans, we know you are ready to rate a whole new set of queens. Season 13 of this Emmy-winning reality competition series kicks off on Friday. Watch with us as the girls duke it out for the honor of being chosen by RuPaul Charles to join the Drag Race Hall of Fame. A lucky 13 contestants are in the fight for the coveted title. So who shantayed with the first all-important win and which queen sashayed away?

Among the baker’s dozen is the usual gaggle of girls from New York City that boast a handful of connections to former contestants. Kandy Muse‘s drag mother is season 9’s Aja and she’s a sister to season 12’s Dahlia Sin while Rosé is in a girl group (Stephanie’s Child) with season 12’s Jan. Then there’s Olivia Lux who is admittedly gobsmacked to be competing among the other three “legends” from NYC, but proud to shadily say that she only auditioned once for the show. Legend Tina Burner also only auditioned once and says she was cast on season 13 because it’s unlucky and as one of the season’s older queens is “the ladder you gotta walk under.”

The oldest queen this season (at a young 46 years old) is Tamisha Iman from Atlanta, as is 30 year old LaLa Ri, Tamisha’s own drag daughter. Tamisha says she creates all her looks from scratch without taking inspiration from well known performers while with only three years of drag under belt, LaLa is worried about sewing challenges because she calls herself a “leotard girl” that focuses on dancing.

There are also two queens from Chicago, Denali and Kahmora Hall, and a pair from Los Angeles, Gottmik and Symone. What makes Denali unique is that she is the first queen from Alaska and the second whose “many years of performance experience” come from her status as a trained figure skater (the first was season 6’s Milk). Though she isn’t a figure skater, Kahmora describes her style as all about glitz, glamour and sparkly things and even if her drag family (including Jaida Essence Hall) is engrossed in the pageant world, she is not an official pageant queen.

Gottmik is the youngest queen competing this season (at 23 years old), but has an established career as a makeup artist for other queens. Gottmik hopes to be the first trans winner of the show and is already the first trans man to ever compete. Symone (second youngest at 25 years old) can also claim her own first as the first queen from Arkansas, despite residing in LA now, and says she is hugely inspired by “strong, powerful Black women” in her drag.

We will also see what queens from other drag meccas bring to the stage this season. There’s Elliott With 2 Ts from Las Vegas, Joey Jay from Phoenix and Utica Queen from Minneapolis. Elliott is in her 12th year of doing drag even at the ripe age of 26, meaning she started at 14 years old, and like season 11’s Brooke Lynn Hytes is a ballet dancer. Joey says she’s the “lipstick lesbian of Phoenix” and is proudly masculine in her drag aesthetic, including not wearing wigs. The main thing Utica wants us to know is that she’s both “kooky” and “spooky” and based on the way she describes her drag as inspired by art and architecture, she reminds us of season 9’s winner Sasha Velour.

Below, check out our minute-by-minute “RuPaul’s Drag Race” recap of Season 13, Episode 1 to find out what happened on January 1, beginning at 8/7c. After following along with our live updating blog,  be sure to sound off in the comments section about your favorite queens on VH1’s reality TV show, who annoys you the most, and who you think will ultimately join the “RuPaul’s Drag Race” winners list.

8:00 p.m. – First to enter the werk room was Kandy, describing her look as a doll being dragged through The Bronx. As a member of the former House of Aja, Kandy knows that she has to live up to the name, but also is looking to make her own path. Shortly after she was joined by Joey who says she can “perform the house down.” Kandy didn’t seem too impressed by Joey’s look, which she shadily described as made from “chicken feathers.”

8:03 p.m. – After just the two of them were in the room, Ru blared the siren and arrived to drop a big surprise on Kandy and Joey. The surprise: Ru wanted them to go to the main stage straight away.

8:04 p.m. – On the main stage at a retrofitted judges panel was series judges Michelle Visage, Ross Mathews and Carson Kressley. Ru informed the other judges that for the first time ever the queens would come to the stage in six lip syncs for their lives with “some will shantay” and “some will shantay away.”

8:05 p.m. – Kandy and Joey were up first to introduce themselves to the judges. Kandy told them about her association to Aja while Joey said that “self expression” is what inspires her to do drag. For their LSFYL they performed Carly Rae Jepsen‘s “Call Me Maybe.” Kandy was theatrical in her mannerisms while Joey was more focused on creating moments with dance moves.

8:16 p.m. – In her first decision of the night, Ru declared Kandy the winner with a “shantay.” That left Joey with what Ru mysteriously called “The Pork Chop.” At that point Joey believed herself to be eliminated, but two new queens were entering: Denali and LaLa.

8:19 p.m. – Denali described her entrance look as a molding together of her two loves, drag and figure skating. LaLa explained herself as classy and told Carson that she could beat Denali in a lip sync. She got her chance in their performance of “When I Grow Up” by The Pussycat Dolls. LaLa went straight into “performance mode,” but Denali was caught off guard being asked to perform in her modified ice skates-shoes.

8:28 p.m. – In this match up, Ru gave LaLa the win, sending Denali backstage with “The Pork Chop.” Backstage, Denali found Joey in a room with portraits of all the first eliminated queens on the wall. At that point they assumed that there was “some kind of trickery” happening, but with no clue exactly what was going to happen to them.

8:30 p.m. – Next to enter the competition was Symone and Tamisha. In their introductions to the judges, Symone explained her polaroid dress as being different images of herself and Tamisha told them she’s been doing drag for 30 years and when she was cast on season 12 was soon after told that she had stage 3 colon cancer. She fought the cancer in the last year and was able to come to this season. During their performance to “The Pleasure Principle” by Janet Jackson, Tamisha put her best 80s dance moves on display and Symone went with a fashion photo shoot style.

8:42 p.m. – In this decision, Symone was picked as the winner and Tamisha was sent backstage. There Tamisha met Joey and Denali who by this time were feeling like it wasn’t exactly the end for any of them.

8:44 p.m. – Gottmik and Utica entered next, sharing an off-beat aesthetic with one another. On stage, Gottmik explained that she likes to be inspired by clowns and artists while a nervous Utica overexplained her drag as a hodge podge of patterns. They performed to Lindsay Lohan‘s “Rumors.” Gottmik delivered a serious take on the song, but Utica took a more humorous approach to it.

8:55 p.m. – The fourth decision of the night went in favor of Gottmik, so Utica exited the stage. Next up was Rosé, a member of Jan’s girl group back in New York, and Olivia, a self-described showgirl who said she loves incorporating live drag into her shows back home. They went head-to-head on Elle King‘s “Ex’s and Oh’s.”  Both girls showed confidence on stage and performed strongly to the rock song. Here Olivia was named winner with Rosé getting “The Pork Chop.”

9:16 p.m. – In the last group there were three queens: Tina, Kahmora and Elliott. Tina described herself as campy and sassy, Elliott said she grew up as a trained dancer including ballet, and Kahmora shocked Carson with her original Bob Mackie gown. The girls faced off to the “Moulin Rouge” version of “Lady Marmalade.” Tina’s moves were vulgar and comedic, Kahmora tried for elegance and Elliott became drowned out by the energy of the other two.

9:23 p.m. – For the final decision, the winner was Tina while both Elliott and Kahmora were pork chopped. Backstage, they met the other chopped girls while Tina went back to the werk room to gag with the other winners. When Olivia told Tina and Kandy that she beat their NY peer Rosé it shocked them because they know her to be a strong performer. Backstage, Rosé was just as shocked that Tina won her lip sync and told the camera that she doesn’t think Tina likes her.

9:27 p.m. – Ru’s voice came through a speaker to tell them that only one of them would exit the competition, after each of them voted for one of their fellow queens to “get the chop.” That sent shockwaves through the room with them all gagged over what to do. We’ll find out what happens next week on the second episode!